On Friday, 27th July 2018, a sell-out crowd of 350 athletes participated in the Dub Runner’s Giants Trail Race. This was the fourth running of the event made famous by the monsoon conditions of first event in 2015 and by the popular grub provided afterwards. Despite the looming threat of rain for most of the day, the sun managed to break through the clouds to add a little extra heat to the evening’s proceedings.

Brian Grimes, Chair of the Dub Runners, speaking at the prize giving, was delighted with how the event went: “Thanks to all of you for running – we literally sold out at the last minute, 11:58 on Wednesday evening. Somehow, we avoided the rain this year again – which made for lovely, if slightly warm conditions for running. Our male race was won this year by 21-year-old Ryan Sharkey who slipped in under 34 minutes, while the women’s race was dominated by Amy Bulman who set a new course record for 40:32. It was fantastic to have teams of local runners from Belfast Running Club, North Belfast Harriers and Albertille Harriers enjoying the event.” 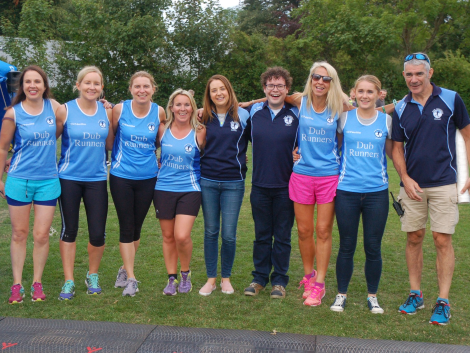 Some of the Giant’s Trail Race 2018 Committee Members!

A night like this requires months of organisation and the team would like to also thank all the Dub Runners club members who helped out marshalling the course (there were over 40 out on the route), those who helped provide, run and clear the hospitality area. A word of thanks to Antoinette and the staff at the Dub Pavilion and Playing Fields who not only provided the facilities, but were on hand with support at a moment’s notice.

Check out the full results and image gallery in our Giant’s Trail Race 2018 mini-site!