Random Fact Nobody Actually Cares About
Since 2015, theWeekly Roundup has published 281 editions – only missing 9th August 2016 when the editor-in-chief took sick flying home from the States!

Not sure if you heard the news but it has just been announced that Aladdin has been banned from flying carpet race.  He was using performance enhancing rugs.  Let’s go shall we?!

Welcome back all! I like to think of this like Pepsi – it’s always there but there’s something better that everyone else likes better.

Tullymore
There were of the club where brave to take to the mountains on Saturday for the Tullymore marathon and half marathon. Dale Biggerstaff crossed the line in 4 hours 7 minutes for his SIXTH marathon of the year (and nope that ain’t a typo)! Running the half marathon was Andrew McDermott who finished at 1 hour 50 minutes, and James Sheridan (who just ran the Run in the Dark on Wednesday) finished in 2 hours 5 minutes. Well done to you all!

In the running for post-marathon photo of the year!

Istanbul Marathon
We had two jet setting members of the club travel to Istanbul! Congratulations to Joanna Patterson who completed the full marathon in 3 hours and 54 minutes and to Danielle Corey who completed the 15k race in 1 hour 25 minutes. Well done to both of you – making the Dub Runners even more global! Also well done to Joanna, this was her third marathon this year and her first under four hours! Excellent achievements!

Run in the Dark
There were a handful of members who ran the Run In the Dark last Wednesday evening. The rain even managed to hold off for a few hours to provide a reasonably dry evening around Stormount! First home for the Dubs was James Trainor – who only went and ruddy won the 5k race! The rest of us went for a second trip around the estate – Ivor (Jack) Russell was the first 10k’er across the line for us in 48:01, closely followed by Amy Lavery who crossed the line in 48:06. James Sheridan finished with at 49:59 and last home for us (and definitely least) Ronan O – who crossed the line in 52:09. I know that Ivor, James S and Ronan all got PBs on the night – Amy, James T apologies if I’ve missed you out! Well done all – it was a great night’s craic! 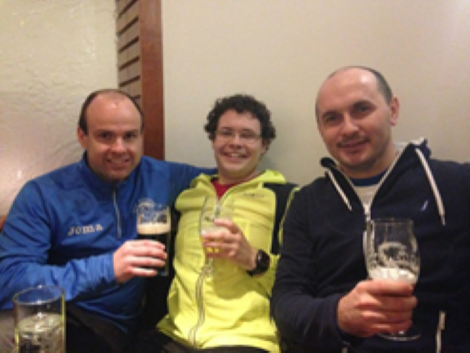 A celebratory drink… or three!

parkrun
The Saturday morning party crew have been out in force and here’s a “run” down of the results!

As always if you haven’t been listed here, you will need to update your club in your parkrun profile. That way you’ll be covered in the future! (That still counts in 2020 btw!)

Well, that’s it for now! Thanks to all my secret sources out there – keep up the great working in keeping me in the loop on everything. Only 11 days to go until the Christmas Party!!!

Disclaimer: Every effort (well, okay some) was taken to ensure the results above are correct. If you’d like to make a complaint then you’ll automatically volunteer yourself for writing duties next week 🙂