April 2015 isn’t such a random edition to jump to – find out more over the jump!

Random Fact Nobody Actually Cares About
This was the first edition of the Weekly Roundup to be published online!  We redesigned the club website in time for the opening of entries to the Giant’s Trail Race and decided to make the move from e-mail to the website.

Update for 2020: Congratulations to Marcy & Noel
Congratulations and best wishes are in order for Dub couple Marcella and Noel Kelly who welcomed a baby boy, Ruadhán Kelly, into the world last Wednesday. They thought that we all needed something to smile about so sent on a little photo. Mother, father and baby are doing very well. 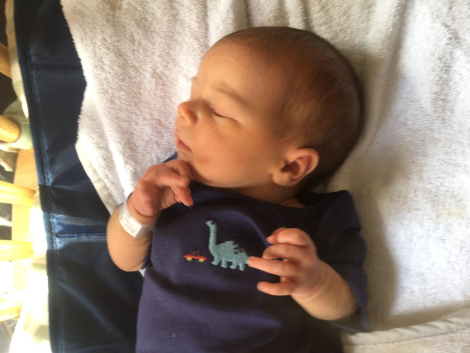 In other news and admist the chaos going on right now it has been announced that Meat Loaf has married his accountant while in lockdown.  She said: “I will do anything for love, but I won’t do vat.”

We have shiny new roundup this week, so gather round, don’t scratch anything – and watch out for the ‘Wet Paint’ signs. I know that, you’ll be disappointed to hear this, but I think I am running out of jokes to tell you – did I ever tell you my déjà vu joke? Moving on…

Hill and Dale Series – Race 1: Castlewellan
It was a lovely, warm Thursday evening and two Dubs took to what was described to me as the “possibly the toughest 10k I have ever run”. Let’s take a look at the results:

Congratulations Maura and Danielle – on a warm evening like that it must have been a really tough route and those are fantastic times – so really well done!

Castle Ward Challenge 10k
Castle Ward was the setting their annual 10k and half marathon challenges, the good weather, unusually, continued into the weekend, and a handful of club members took on the 10k route:

Great times from everyone who ran – I’ve seen some photos from the run, and it looked like a cracking route and day! 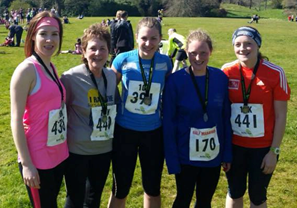 Everyone smiling and enjoying the sun!

Across the countryside a little bit to Ballynahinch, where we had a single Dub flying the flag for us:

Well done Maureen! First Dub across the line too! Although I’ve no photos to include in the roundup!

First Dub home and he won a delicious bottle of Red as a prize for ‘First Local Home’ – so well done Noel – that is a great time on that course! Plus a top five finish – not a bad day’s work!

WCM 10 Mile Warmup Race
I have to say, Sunday was the probably the warmest day ever. A good crowd of Dubs ventured to my home turf to take on the annual 10 mile road race – which is part of the warmup series of races towards the Walled City Marathon.

Great times by everyone, and hello to Ivor and Ciara who became honorary Dubs for the day too! Special mention to Collette who won the female race – a good omen ahead of the real thing on 31st May! 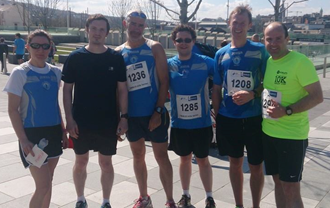 At the finish line in the historic Ebringotn Square!

parkrun
And… finally! The Parkrun, lots of us out and about the parkruns over the country this weekend, and some great results too:

Special nods this week to Natalie, who was the first female across the line at Queen’s! Also fantastic PB runs for James (Victoria), Lorraine (Queen’s) and Sean (Harstown)! It’s the challenge of getting up on a Saturday morning that make the Parkrun great – so really well done to everyone who ran over the Parkrun!

Remember –if you’re not listed as a Dub Runner, you won’t appear on the results!

Warmdown
It was a busy week, I hope you all like the new website – let me know if you find any issues and I will try and get it sorted. As always let me know if you have results that you want to be included in the roundup from next week!  We’ll end this week on a sad note – my pet centipede died this morning. I’m still pretty upset about it, but he was on his last legs.

Until next time – keep on running!