2020 Update
As we venture back towards training (and some semblance of races) it is always good to lo0ok back at the years gone by. Remembering the great achievements and the club members getting their name in lights and a moment n the spotlight. Here, did you know that what starts with a W and ends with a T – it really does, I swear!

Warmup
Well, that was a bit of a busy week! We must give some big thanks to Jane for her organisational skills for our social evening on Saturday – the bar has been set very high for Christmas now 😉 Before we see what everyone was up to these past seven days I want to tell you all about my Friday. I was out on Friday night and I told a friend “A couple of mates and myself were talking about you!” He said “You disgust me!” and I replied “Yep, that’s exactly what we did!” Okily dokily, let’s take a look:

Portrush 5 Mile Road Race
Most of us think of the beach when we hear of Portrush. The anticipation of , I mean getting an ice cream. Instead on a damp but drying Friday evening, along scenic costal roads there was an undulating five mile loop setup. We had one Dub standing at the starting line:

Good running Alex – that isn’t a course most of the club would do on a Friday evening! The training is paying off! My only complaint is that there’s no photos – but while you are in the neck of the woods… isn’t there a certain Saturday morning ‘event’ that you could do..?

Mourne Triathlon
For once, we’re mentioning the Mournes and Jim isn’t running! Kicking off with a 750 meter swim in Castlewellan Lake, followed by a 20k bike ride from the lake to just past Ballyward – and back again. Rounded off with a 5k sprint around said lake. I know what you’re thinking – wee buns – well it wasn’t, and we had a single brave Dub taking up the challenge:

That’s our Mike! Well done good sir – really impressive times posted in all three parts of the race. For me, just getting to the finish would be enough, but Mike also won his age category – so a double whammy! Only downside was that his prize was a free entry into next year’s race (it actually was!!) Unfortunately, it looks like you were able to dodge the cameras at the event!

Storming the Castle
Our friends over at Seapark (some of us did the leaders course with them) organised their club race starting in the heart of Carrickfergus. After a mile the course shifted to the coast line for the final five miles. The coastal route passes the marina out to the roundabout, before heading back to storm Carrickfergus Castle for the finish! It became a bit of a trend this week, but we had one Dub on the start line:

Superb running Alastair – despite the best efforts of your number! Apparently, this is one of the flattest 10k races in Northern Ireland, but the conditions were excellent and ideal for running. The highlight of the race, according to Alastair, was the human traffic cone at the turning point. Earlier, I mentioned his race number: 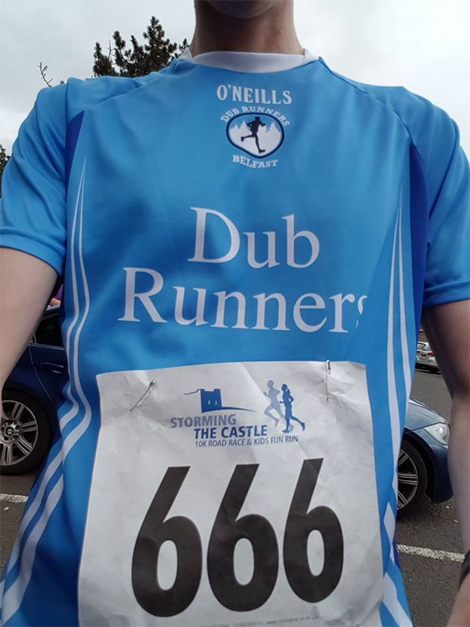 Storming: Alasitar is better the devil you know!

parkrun
Saturday morning rolls around again, and this time it is a bank holiday weekend to kick start. In mostly dry conditions, we set off for our nearest parks (and not so near parks) to bag a quick 5k before relaxing. Let’s see where everyone ended up:

Really great running everyone – especially considering I know that most use the 5k as part of their longer weekend runs (or just for the craic). So, in a first, our hat tips this week are all newbie course PB times set by three Dubs: Suze (at Portrush), James S (at Cookstown) and Ronan (at Cookstown). Of course, as has become tradition, there is even a parkrun photo this week: 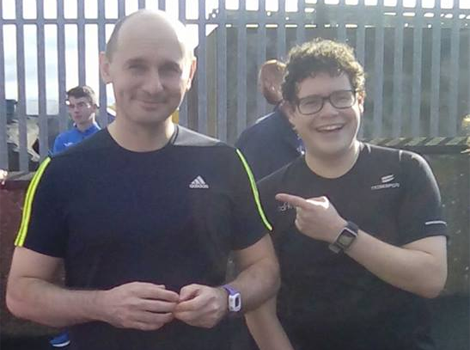 Warmdown
There we go, that is the last weekend of the summer now officially over as we move into September. Of course, that means pretty much nothing as I know there are still lots of races in the sights of all the Dubbers before the road racing season ends in a few weeks. Don’t forget – photos please! You know, I have a friend who is a vegan, and she thinks people who sell meat are disgusting; but apparently people who sell fruit and vegetables are grocer.

Disclaimer: Every effort was taken to ensure the results above are correct (I am too tired from Saturday night!!). If you’d like to make a complaint, then you’ll automatically volunteer yourself for writing duties next week 🙂