Aww, who remembers February 2018?  Don’t worry – this will give you a little remider!

2020 Update
As we venture back into the archives, firstly, a community alert. A shop assistant fiercely fought off an armed robber with his labelling gun yesterday. Police are looking for a man with a price on his head.

Warmup
You think that you had a busy week – well here at Roundup Towers we had a lot to keep an eye on over the last seven days or so. I was so busy this week, in fact, that the missus is leaving me because of my obsession with astronomy – I mean, what planet is she on?! Hold on tight, here we go:

Jane – O Canada!
Jane told me that her favourite photo of her running – was the one I took at the XC a few weeks ago. As it is her final week with us before she jets off, I thought we’d give her pride of place as the featured image in this week’s roundup! Thanks for all the laughs, safe travels and don’t forget to tell us about any races you do so that we can include them here!

Valentine’s Day Run
EAMS hosted a special Valentine’s Day race around a tough 4.2 mile course, in windy and rainy conditions. Along their traditional course along the coast, the challenge was to run as many loops as you could in six hours. I think you all guessed it – Louise was there:

Woah, fantastic running, managing the course four times to clock 16.8 miles in total on Wednesday morning. Great running, in some really harsh conditions at the coast. If that was me, I’d take the rest of the day off to relax, but not Louise, she made it into work after the event – fresh as a daisy!

Armagh Internation Road Race – 3k
Billed as one of the fastest 3k races in the world – international eyes shifted to The Mall in Amragh for their annual road race event. The course is flat as a pancake (ironically two days after Pancake Tuesday), and the perfect opportunity for a good and fast time on the course. Who else would we be talking about taking on such a race?

Two laps around The Mall – the race is over with hardly any time to think about what you’ve just done. Stunning running James – such an impressive time in challenging conditions – and a PB time too, amazing! An ultra-competitive field of runners from all over on a tight course. Oh photos from this one, but at least you’d plenty of time to rest before your next race…

Tollymore 10k Night Edition
Not for the faint of heart, the final night race of the 26 Extreme series was run in cracking conditions on Friday evening. On the now familiar trail paths around Tollymore Forest Park with gravel, muck and tree roots for company this undulating course requires steel determination to cross the finish line. We had an intrepid crew of fourfDubbers taking part:

I counted six distinctive rises on the course – and that doesn’t even include the run UP to the finish line! Great running folks, and James T with a first place finish – outstanding from all four, representing us proudly. Poor Paul managed to survive a bit of a tumble (light assisted this time), to recover well for a strong finish. Always one to heed a warning, I got a few phots sent through to my desk:

Donard Wood Trail Race
Hands up, who’d like a nice wee five mile race near Newcastle? Oh, you’ll just have to run up Donard in the process! The race was held to raise funds for the Mourne Mountain Rescue organisation, reaching the summit just after the half way point – before a freewheel back home! There was, of course, only one Dub for the job:

Nice work Bernie – great to see you back at the races we all know you secretly love doing! Rumour has it that you found this easy – I wouldn’t believe that for a seond! Mind you the review I was given of the race was that it was “good craic”! There was even a small Dub Cheerleading squad who made the journey, and they (he, singular) sent us these photos from the event: 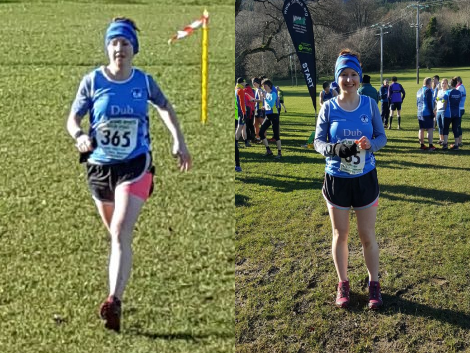 Back on the Trail: Bernie powers to the line and celebrates!

Greenisland Half Marathon
Oh yes, EAMS strikes again this week! A loop course, starting with a slight rise, before turning and heading downhill towards Monkstown and the sea, another turn along by the water before a slog back to the start. Just two laps for the half marathon, but thankfully it was all over before the rain took hold on Sunday. We had just the one Dub on the scene:

You da man Jim – fresh from your stroll to the line in Dundalk last Sunday, to the slightly warmer conditions this weekend! An impressive time – especially if you know those roads, some of those hills are back breakers, not the kind of ones I would want to race on! Still, everyone get a medal, and is allowed to gloat a little bit, so here’s Jim showing off his silverware: 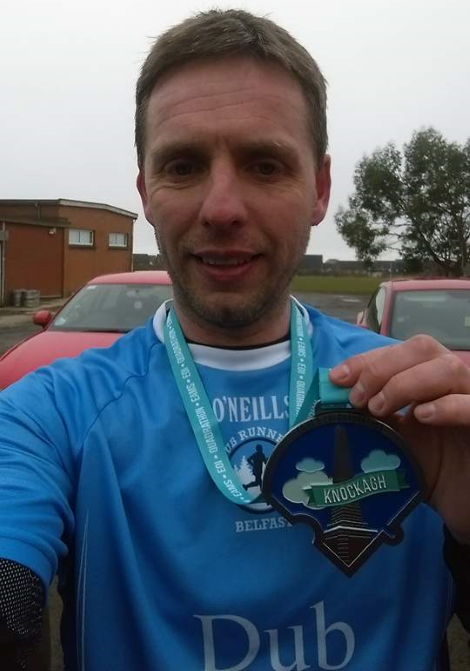 Jim S completed a tough Greenisland half on Sunday!

Run Forest Run: Gosford
Remember that weekend with all the snow and the ice in January? Remember, I was happy as the roundup was nice and short that week! Well, the rescheduled race, now the penultimate race of the series, was held on Sunday in Gosford Park. With over 1000ft of elevation change, this is the definition of an undulating course – with no reprieve over the entirety of the 10k route. So, who was there I hear you yell?

Once again, some fantastic running from Louise on Sunday morning. Sadly, the conditions didn’t hold up, so the trail paths were made that little bit more tricky in the wet and damp conditions – but at least it wasn’t that snow and ice from January! That’s a fierce amount of running this week, we all hope that you got home, put your feet up, and relaxed after all that!

parkrun
So, with the build up to the main racing season continuing, the trend this year appears to be to make parkrun part of a long run on a Saturday morning! No issues there – take a look at the hugeee numbers of Dubbers who made a 5k part of their kickstart to the weekend. Let’s see how everyone got on:

Nice work everyone, it was a great morning for it – auld Barra predicted it’d be the better of day of the weekend, and he was right! You got your hat? Great, great ready to tip it to Frances and Anne Marie who both smashed new course PBs at the Ormeau event! Also, we had one new tourist this week, as Michael set his benchmark at the Omagh event.

Warmdown
And fin! Great work everyone out there running, and a special thanks to all my little birdies this week – the tip line was off the hook (it’s an old fashioned telephone term, go look it up)! Not sure about the rest of you, but on Sunday morning I got up early and eagerly awaited the Irish bobsleigh team at the Winter Olympics. Sadly though, they refused to race until the course had been gritted.

Disclaimer: Every effort was taken to ensure the results above are correct (calm down with the races please folks!) If you’d like to make a complaint, then you’ll automatically volunteer yourself for writing duties next week 🙂