Thanks for all the feedback on the website – I have taken it all onboard, and I will get around to it over the next week or so. The weather has taken a bit of a change, so make sure you all stay warm when you’re out and about. I was in a bar over the weekend when a guy with a car, a rocket scientist and Brad Pitt walked in… Shania Twain wasn’t impressed. On with the results:

Hill and Dale Series – Race 2: Tollymore
For the second week in a row, the Hall and Daler’s got a lovely warm evening for a run. Tollymore was the setting for another tough 4.5 mile trail run, with two Dubs competing:

Really well done to Maura and Danielle for tackling the challenging course – I hope you both took a break over the weekend after that!

Strabane Lifford Half Marathon
On Sunday the second annual Strabane Lifford half marathon took place. It was a wet and cold morning on the unique cross border route, starting in Strabane and taking in the scenic countryside of Donegal. We had two members in the race:

Well done to both of the guys, and special nod to Niall on his PB too – those are great times guys! I felt I had to include Niall even though he didn’t’ register as a Dub on the day, so congratulations to Richard on being the first Dub across the line 😉

Virgin Money London Marathon
On Sunday, there was a major event on in London – no, not the Sherlocked convention – the London Marathon! A cloudy grey start, broke into a lovely sunny day for the runners who took on the 26.2 mile route taking in all the landmarks across the city.

Big congratulations to everyone, you all ran fantastic times to be proud of. I see from certain social media sites that a good time was had by all during well-deserved post-race celebrations! 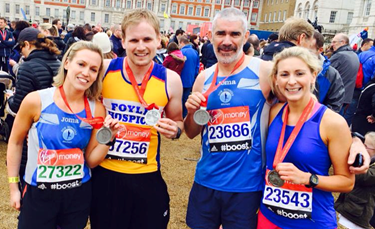 Do any of them even look tired?!

Parkrun
Ah, I missed it this week, but we round off this roundup as we do like all the others – with the Parkrun. The traditional Saturday morning routes were filled with Dubs this week, taking to numerous Parkruns across the country…

As always, that is some great running by everyone. Special nods this week go to Natalie was the first female across the line in Derry City and who Noel was the second male across the line at Queen’s (not to mention their PBs to boot). Also well done on PBs to Richard, Conor, James, Sean, Lorraine, John and Kathy!

Want your name here – simple, make sure you’re registered as a Dub Runner!

Warmdown
That is it for another week, as always let me know if you’re doing a run that I might miss out on so that I make sure that you are included. I was bored the other evening, and decided to link of my watches together to make a belt… it was a complete waist of time!

Until next time, keep on running!