It is back, and it is bigger than before (well, there’s lot’s of results!)

Here we go for another weekly roundup – it’s what Tuesdays are made for! First a catchup on someone I missed from last week’s report, followed by all the latest reports – hot off the press. I am a little disappointed today, I just found out that my new musical “Army Pigeon” has been canceled. Apparently, Belfast City Council weren’t keen on a military coo…

Termoneeny 10k
Gah, I missed this race from last week’s roundup. T’was a wet and miserable morning to be back home for Aedín, so fair play for getting out and running the yearly 10k race:

That is a fantastic time, on what has been described as “one of the toughest courses I’ve ever run”. Of course, it would not be a roundup without an obligatory photo: 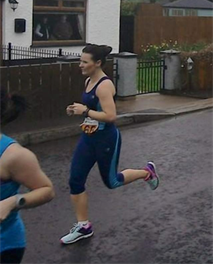 Loving the two randomers just watching out their window!

Woo-who, well done folks, those are fantastic times – and over trail routes too!  James finished third and Maureen managed to finish first in her age category – the icing on the cake for another great night for the club! For anyone who is interested, the next trail race is on next Tuesday in Tardree Forest.  Thanks for the nudge as a reminder too!

Les Jones 10k
Dead man’s hill takes on a whole new meaning when it forms part of a 10k race – which is exactly the description of the Les Jones race that good place on Friday evening. We had four brace members of the club taking part.

Some fast times from the club on Friday evening and that is one tough course too! I’ve not heard if there are any PBs from the night, but times to be proud of from all you!

Cooley Coast Race
There was a 12.5k race on also taking place on Friday in Lough. A lovely coastal route awaited all the participants:

Well done John – that is a great time! I always like the races with unusual distances – it makes things a bit more interesting and unique. Thanks also letting me know about the race!

Coast to Coast
No, it’s not a Westlife song! It is actually a race: where you cycle, kayak and run a 316km route across Ireland – from coast to coast. We had a single member take on this mammoth adventure:

Joanna – congratulations! That is some feat to be proud of. For those wondering, the event was split over two days: Day one involved a 155km cycle and kayaking across Lough Erne. The second day began with a 122km cycle and finished with a 35km run across the Mourne mountains! My thanks to a little birdie for the update!

Parkrun
There were tricky conditions for running this weekend around the local parks. While it was mainly bright, the wind picked up and there was a constant risk of rain! Despite all that – we had a great turn out of members around the county:

Well done to everyone on Saturday morning – I wish it got easier getting up on Saturday mornings!! Special mentions this week – well done to Niall – who third male across the line at the Waterworks event (and a first timer PB too). Paula was the secobd female across the line at the Victoria event.  Also, clocking up his 36th different Parkrun Mike edges ever closer to hitting the magic 50. There were also first timer PBs this week for James (Waterworks) and Stephen (Victoria).

Want your name here – simple, make sure you’re registered as a Dub Runner on your Parkrun profile!

Warmdown
Another week closer to Christmas! Only kidding… make sure you put your name in the hat for the Glenmore Challenge, places are filling up fast. I’ll end this week’s roundup with some good news, it has been announced that my good friend, the inventor of the “knock knock” jokes is to receive a no-bell prize!

That’s all folks – keep on running!