Another great week for the Dub Runners – find out more after the jump!

It has been a great week for the club, with some of the club members even dubbing the weekend “Super Saturday” and “Super Sunday” – but more on that later.  On a personal note, can I thank everyone who helped me at the AGM, to work out the English translation of the word “mucho” – it means a lot. Oh results, right…

Runher
The annual coastal challenge 10k race route from Seapark Holywood to Crawfordsburn Country Park took place on Friday. It was a lovely evening for a run (and some food too I hear 🙂 ) – so well done to Lynn Donnelly, Kathy Mayhew and Jackie Robinson.

I can’t find any official times – but I have a very reliable source who tells me that you all took on the course. So that means that you get a mention in the roundup anyway!

Killclogher 10k
County Tyrone was the host of the annual Killclogher 10k race over the countryside near Omagh. The undulating but quick route was made all the harder with the warm conditions that we enjoyed on Saturday afternoon.

Congratulations Niall, really well done – a strong finish, high up the ranking order too – and it was a PB too to boot! Also, great to see Ivor is still out running – keep up the great work mate!

Newry City Half Marathon
Newry (ahem) City reverted back to their original race routes this year, after last year’s jaunt to Warrenpoint and back again. This year’s route took in the city, the towpath and three-hills-in-one as a nice treat at the half way mark! We had six club members taking part:

That is fantastic running by everyone on a lovely early Sunday morning race. Some personal bests thrown into the mix too from Jim, Roisin and Nessa – who managed to take around two minutes off her last personal best time! Also, Newry was the fourth race in the Pure Running Half Marathon Series with Jim, James and Ronan trying to run their way through all ten races! 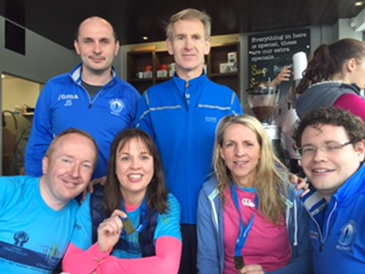 Dubs staying ‘Grounded’ after the race!

Parkrun
Saturday started chilly, but as it warmed up, the club went out in big numbers this week to tackle the various courses around the country. It was a successful morning for the club as we can see:

Okay, wow – that was a great morning from the club on Saturday. We had a few first females across the lines at their respective races: Roisin at Waterworks (and a PB too!), Natalie at Queen’s (and a PB too!) and Marcy at Enniskillen (and a PB too!) [and after a bottle of wine!!]. Flying the flag for the fellas, Noel was the first of all across the line at the Johnstown event (and a PB too!). Not forgetting Paula’s second placed female in Victoria too! Only one first timer PB this week comes from Ronan (at Valley).  Well done on personal bests this week for Dale (at Wallace) and John and Danielle (both at Ormeau). Well done to everyone for getting out of bed on Saturday – really impressive times from everyone – let’s keep up the great work!

Want your name here – simple, make sure you’re registered as a Dub Runner on your Parkrun profile!

Warmdown
Hopefully you can see why this week has been dubbed “Super Saturday” and “Super Sunday” (totally eclipsing that other Super Saturday at the 2012 Olympics). The races are starting to come thick and fast now, and it’s getting tougher keeping on top of things – so please send me an e-mail if you’d like your results included. Don’t forget too, the odd picture is good too!! I am very excited, I have just gotten my dispatch notice from Amazon that my vault and speaker are on there way… I hope that they arrive safe and sound!

I’m off for a rest – keep on running!