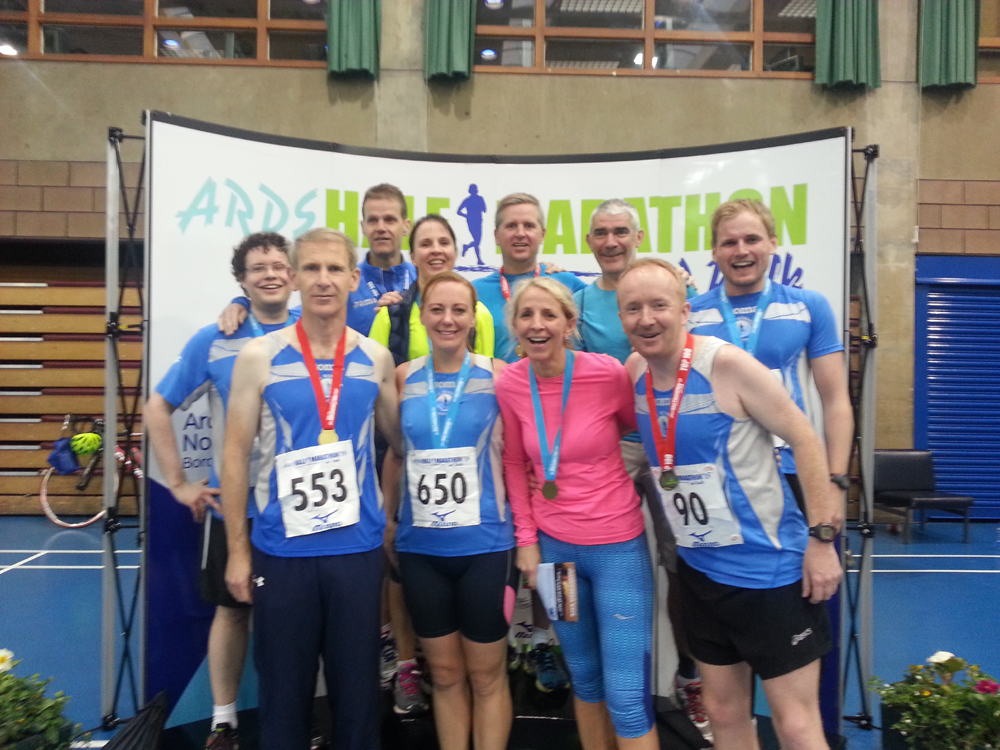 Find out about all the top ten finishes and more across the jump!

Warmup
First off, apologies for the lateness of this week’s roundup. As you can hopefully see, there was a lot I had to make sure I included (and got right,) so it delayed things a little! Did you hear about the guy whose whole left side was cut off? It’s okay, he’s all right now…

EAH Race 4 – Woodburn Forest
The fourth and final East Antrim Harrier Forest trial race took place in Woodburn. With a 4.5 mile course it was the longest, but probably least hilly race of the series. Our usually two runners completed the series:

Congratulations James and Maureen, great times and grea running over the entire series. Special mentions to both James and Maureen who finished first in their respective age categories. Representing the club well!

Grant Thornton Runway Run
This is the latest run to ‘take off’ in Belfast – a 5k dash along the runway at Belfast City Airport. You have to be part of a company team, but I’ll pulled out the club’s results. The unique late evening run departed from Gate 4:

Well done folks, you were all ‘flying’ on Wednesday night, those are great times all round – and you can definitely say that each of you got a personal best too! All clear for landing…

Had to include this – Noel taking part in the Runway Run.

Ards Half Marathon
The eighth running of the Ards Half Marathon set off on Friday evening. The course, for those that don’t know, starts off on a series of hill climbs, a bit of a rest downhill into Comber, before a final uphill stretch before returning to Ards. As if that wasn’t tough enough – it was extremely warm on Friday evening. We had 12 club members taking part:

Really well done to everyone – some great times on a challenging course. Not a PB course, except for Natalie who got a PB, so special mention to her! It was a great club event, with some podium photos now available in the photo gallery.

Dromore 10k
Tyrone on a warm Saturday midday was the location for the extremely tough 10k route around Dromore and the surrounding countryside. The undulating course had a few big hills, which have been likened to Dead Man’s hill, and we had three brace club members taclking the course:

Absolutely great running from the three of you! Niall on top for, really going for it and achieving a top ten finish, with Ivor and Lynn putting in performances to be proud of on the tough course. Well done to you all!

Hill and Dale – Race 11 – Drinnahilly
The final race in the Hill and Dale series took place on Friday evening in Drinnahilly (it’s in Newcastle!) Even though it was the last in the series, the 4.75 mile route contains a lovely climb of just 1080 feet, and we had a single representative out there:

Fantastic running Vicky, on a really warm Friday evening too makes it all the more impressive! You told me that it was a tricky route, but that you enjoyed the race! Well done to everyone in the club who has taken part in any of the Hill and Dale races!

The Fitness Habit
The 3rd annual Fitness Habit 10k Run and 5k Fun run is a beautiful scenic route which takes in the local Rossmore Forest Park, and Sunday was a great day for a run. We had a single runner taking part:

That is some great running Joanne, especially on a route that began at the bottom of a hill and finished at the top of another hill and was a mixture of roads and forest trails.

Run for Paul – 10K
Sunday was the “Run for Paul” 10k and 5k races near Downpatrick. Sunday morning has pretty ideal conditions for the tough but rewarding two-loop course for local athlete Paul Brannigan, who has recently been diagnosed with a lung disease. We had an old face taking part in the run:

Really well done Alastair, that is a great time and running for a great cause! Great to see you back running at some of the local races!

Parkrun
It was a lovely Saturday morning, for getting up and going out for a 5k run – and quite a lot of the club thought that too! Even a few members who raced on Friday evening braved the parks for a little jog:

That is a great turn out from the club and really impressive running from everyone – fantastic work. Special mentions this week to Collette who got a PB and was the first female home at Queen’s. Also new PB runs this week from John (at Victoria), Kathy (at Victoria), Noel (at Queen’s) and Michael (at Johnstown). Also, one first timer PB this week and that is Rachel (at Waterworks).

Warmdown
Once again, thank you to my “little birdies” for keeping me up to date on the all the latest goings on, there are quite a few of you this week, so thanks. I was out for my dinner the other evening, and the waiter came over and asked “Would you like to hear the specials?” I replied “Oh, yes, I am quite partial to Ghost Town!”