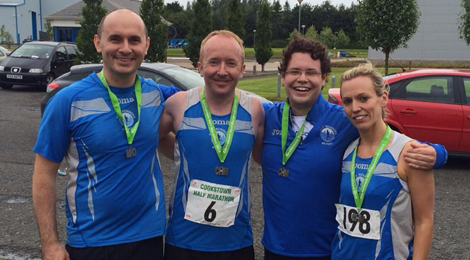 Race-wise it was a quiet week for the club, find out more after the jump.

Warmup
Well it was a big week  for the club, the Giant’s Trail Race was an excellent event, and we’ve had some great feedback from the field (and the runners have been pretty positive about it too)!  I hope you’ve all recovered and dried off since.  I had a bit of an argument with the missus last night, she called me immature – so I kicked her out of my fort!

Giant’s Trail Race
There’s been a lot said recently about the trail race, I would like to add my personal thanks to one individual in particular – Mags Mathieson.  Mags was one of the timers on the finish line on Friday night, but she also helped to make me look good (an impossible task, I know) by helping me out with the names of the competitors as they approached the line.

For those of you interested there are some photos of the event available from the Pure Running Facebook page and our good friends at NI Running have a gallery up too!

Cookstown Half Marathon
A dull Sunday morning provided the setting for the 2015 Cookstown Half Marathon.  The route had been changed from last year, and this year’s event was a real tough one.  Over the first nine miles or so of the race was hill after hill, and undulating, before settling into a downhill for the last mile.  There were a handful of Dubs racing:

That is fantastic running from everyone in the club – those are great times to be proud of!  The route was definitely not PB territory, but it was a fun challenge and there was plenty of craic to be had.  Big shout out to honorary Dub Ciara who ran with our Andy who was the 2 hour 15 minute pacer for the event.

For Jim, James and Ronan, Cookstown marked the 8th Half Marathon race completed from the ten in the Pure Running Half Marathon series – just two more to go now!  Of course, there was the obligatory pre-race photo (I’m not sure we were smiling as much at the end):

Parkrun
There were some Dubs weren’t exhausted from the Giant’s Trail Race on Friday evening, and got up on a gorgeous Saturday morning, where the sun split the sky (typical when it poured on Friday evening) and it was a great morning to get out running.  There were quite a few Dubs out and about:

Great running by everyone on Saturday morning.  Of special note this week: Natalie was the first female across the line at the Queen’s event, James was the second male finished at Queen’s and Niall was also second across the line at the Ormeau event (and a PB too!).  No new PBs this but, but we had some first timer PBs from James (at Wallace), Andrew (at Ormeau), Cameron (at Bangor) and Ronan (at Bangor).

Warmdown
That tops off a fantastic week for the club!  As always keep the photos and updates coming to me so I don’t miss anything in the roundup!  After Friday I was bored in the house, and I took the shell off my racing snail to make him go faster… it only made him more sluggish!