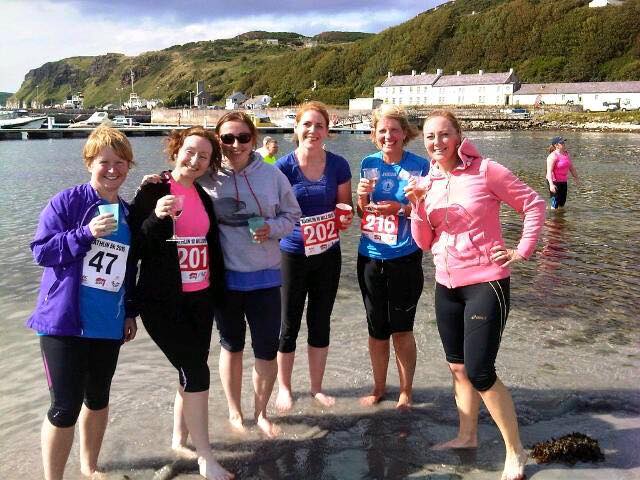 Eh, when did it become September already?!  Find out what the club’s been up to over the jump!

Warmup
We have a big contingent of member’s who are currently training towards various marathons – so I look forward to reporting on those races in a few weeks time.  The rest of the club has been busy with races this week, as the roundup proves!  As the new school year begins, a teacher ask one her students “Johnny, please use the words “letter carrier” in a sentence…”  Proud as punch to be asked, Johnny replies “No problem, ‘My dad said that after seeing how many things my mom was bringing on vacation, he would rather letter carrier own luggage.'”  Now… let’s take a look at some results!

Well done everyone on completing a tough challenge over the last months.  Special nods to Roisin who topped her category, and if you take the times of the 17 runners who finished all ten races, the three Dub fellas all finished in the top ten!  So… who’s up for it next year?!

Rathlin Run 10 Mile & 5k
A lovely Saturday – and what a better way to get the weekend started than getting a boat across to Rathlin and going for a run.  The 10 mile route was extremely hilly and tough in the heat of the day.  The 5k route was “tougher than the average Parkrun” and hilly to-boot.  Let’s take a look at the results:

Here come the girls!  Fantastic running from everyone – not a PB course, but the scenery, location and craic with friends helped to make the race day.  It was a tough, tough race by all accounts, so I don’t need to tell you all that you should relax after it…

The Dub Girls at Rathlin

Belfast Mountain 10k
A unique 10k run took place a mild Saturday morning in Belfast including a steep climb up to the Divis transmitter.  The course was challenging but participants were rewarded with scenic views of Lough Neagh, Belfast, the Mournes and over towards Ards.  We had one club member braving the ascent:

That is a truly fantastic time Paul, especially on a course that by your own admission is not a PB course!  The race does come highly recommended for next year as it was a really lovely race, well organised and had a very friendly atmosphere!  I’m sold!

Strangford 10k
The costal village of Strangford played host to its annual 10k race at the weekent.  The small but challengening event sees the participants climing for 7k followed by a sharp, but welcomed, 3k downhill to the finish.  We had one representitive on the route, none other than our leader…

That is a great tine Brian, on what you’ve admitted was quite a tough course – and just shy of a top ten finish too, so there’s a target for next year.  U hear that there was no hanging around at the end – mostly becusae Brian forgot his bucket and spade!

It was a humid Saturday morning, which always adds to the pain when getting up for your weekly 5k run – even that didn’t put many in the club off, as we took to the paths in our droves on Saturday morning! This weekend, we welcomed Stormount to the Parkrun family in Belfast, and had three members try out the new route which was described as “nice, but definitely not a PB course”. Find out the the Stormount and all the results below:

Great running by all, and times to be proud of as the summer draws to a close (sorry teachers)!  We  have one improved time PB this week, and it comes courtesy of Jim (at Queen’s) who narrowly missed out on a podium finish in fourth.  First timer PBs this week come from Jenny (at Victoria) and John, Cameron and James (at Stormont).  A final mention, as always goes to Mike, who ran his 39th unique Parkrun in the UK, this time taking on the Hillsborough event in Sheffield – keep ‘er lit now, just 11 more to go!

Warmdown
That’s it for another week, thanks to everyone for their help in getting all the inside information on some of the races this week – keep up the great work folks!  I had a mate around at the weekend and he called me posh – needless to say, the butler showed him the door!