It was another relay busy week for the club – find out more over the jump!

Wamrup
Yikes, what a busy, busy week it has been for the club.  Well done to everyone who was out racing in some shape or form over the weekend – I count around 40 of us competing, and that is before we count the supporters from the club – keep it up!  Did you all hear about the magic tractor?  It went down the road and turned into a field…. And the results!

Corrections
I know, I rarely make mistakes, but last week there were one or two, so I would like to set the record straight:

Galway Bay Half Marathon
One of the last big half marathons of the year takes place in the scenic venue of Galway Bay.  The predominantly flat course (with hardly a hill in sight) is popular with runners from all over the country.  The event had a representative of the club racing:

That is great running by club member Andy along with his fiancée, and friend of the Dub’s Ciara – who ran a PB on the course too!  Keep up the great work folks!

FEARmanagh Endurance Adventure Race
Our leader this week can definately be described as our fearless leader and he travelled to Fermanagh to take on their endurance “adventure” race!  The long race started off cycling 10.2k, the running 7k, back on the bike for 30.5k, jogging for another 4.5k, back to wheels for 3.8k, a quick 1.2k sprint, into the water for 2k of kayaking, dry off with another 1.2k run rounded off by cycling 13.6k to cross the line… anyone else dizzy?

Wow, that is amazing Brian, absolutely fantastic going – and a proper endurance race.  Shame that you missed out on the official acodlade of finishing second in your age category – but we’ll make sure you get mentioned here for that one don’t worry!  Can we assume you’ll be looking for someone to organise the club for you for the next week?  There’s even racie… a race-selfie – that is so going to catch on! 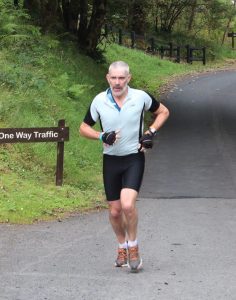 NI & Ulster Road Relay Championships
Ideal conditions awaited the athletes taking part on Saturday’s event.  For those familiar with the Victoria Parkrun event, each person runs a 2 mile course, which is twice around the Parkrun outside loop.  It has become a bit of an event for the club and this year was no exception:

All Dub representatives put their heart and soul into the race, supported by a great turn out of fellow dubs who came do show their support. It’s difficult to pick one outstanding member as I believe  all secured a PB for the 2 mile distance however hats off has to go to James Trainer who completed the two mile course in a lightening speed of 10.33 and  Tara Thompson who flew into the finish line with a time of 13.09.  Well done to all three teams, captains, subs and the best support team any club could wish for and a special mention to the most awesome camera woman for the top quality action shots!

Marty’s Run
It is described as the biggest 5k run in the North West – and on Sunday it lived up to its name!  The one thousand strong entrants took to the mostly flat, circular route just on the border with Donegal on a gorgeous Sunday morning.  The Foyle Valley run race is popular among the local athletes and we had a club member (plus one guest) taking part:

Fantastic running Sarah, really well done on the tight course where it can be hard to keep your position!  Also, great to see Ivor “Jack” Russell taking part – as always an impressive time!

Runher 10k
Sunday afternoon was the Runher woman’s race which is a lovely course with a great atmosphere and, I’m told, all the girls seemed to be loving life.  The course basically meandered around Victoria park and around the titanic quarter, on a hot afternoon.  Sure, didn’t we have a handful of club members taking part:

Fantastic running ladies – all times to be proud of and challenging on such a warm day too good.  I have also been asked to pass on some thanks to the  turnout from the supporters from the club- you were seen and heard!

Parkrun
It was slightly cooler than of late for Saturday morning’s Parkrun this weekend. The fresh conditions helped lots of the club members get up and out of bed to take on the various events! Let’s have a look at how we got on…

Special mentions this week to Paula who was the first female finished at the Wallace event, and also to Nessa, Alex and Roisin who all complete the Victoria event and finish joint first! Okay, there may have been a timing issue, but it is still a win in my book! Only the one new PB this week, which was from Paula (at Wallace) – well done! First timer PBs this week go to Kathy (at Oxford) and, of course, Mike (at Cross Flatts) who’s completed his 42nd unique Parkrun and is fast heading towards number 50!

Warmdown
As always thanks to my little birdies who have kepy me informed of various events over the weekend.  Safe to say that the roundup would have missed SO much without your help – so cheers for that!  Lads, I’m sure we’ve all been here: she turned off the lights, leaned in, and looked into my eyes – a long, lingering look, deep into my eyes – well, what would you do..? I went in for the kiss -and then I was escorted out of Specsavers.