An international 5k and local 10k and marathon races are the focus over the jump!

Warmup
Spring has well and truly sprung this week – and it shows from the numbers taking part in the various races over the past week – but more on that very soon.  Is anyone in the same boat as me?  When I was a kid, my parents would always say “Excuse my French” just after a swear word??  Well, I’ll never forget the first day at school when my teacher asked if we knew any French…

St. Patrick’s Parade 5k, Atlanta
Some of us head away to exotic countries and swear that we packed those running shoes when we can’t find them in our suitcases – knowing full well that we had no intention of doing any running and are taking a ‘well-earned rest’ from the streets. We had one member of the Dubs celebrate St. Patrick’s Day a little bit earlier than the rest of us on Saturday:

Great running Geraldine – especially in the 24 degrees heat plus I hear that the course was very hilly – and you’ve told me that it “nearly killed you” which we all find very hard to believe from the before, I mean the after photo! Well done – I hope you enjoyed the parade after the race! 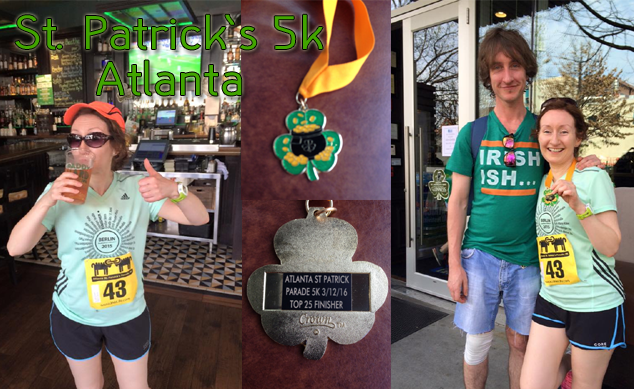 Knockathon Marathon
The next race in the East Antrim Harriers series continued on Sunday morning at 9am – with a two lap route starting from Greenisland golf club. The route basically was “up a big *cough* off hill TWICE – and took runners towards the Shore Road, up past Glen Park, onto the Monkstown road, then further up into the Knockagh Road, on down to Woodburn before looping back to the gold course to start again. Once again, we had a single brave Dub racing:

That is a fantastic spring morning for running – and Dale you even mentioned enjoying the race! That is a great time posted – and the next one is in three weeks if anyone else is interested in running it with him! As expected, here is now obligatory happy picture from Dale: 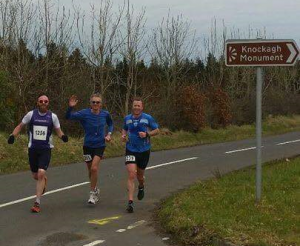 Jimmy’s 10k
What is now fast becoming a stalwart of the local racing calendar, our attentions shifted to Downpatrick for their annual Jimmy’s 10k race in memory of Jimmy Murray – a Downpatrick school teacher and athletics enthusiast who was one of the founding members of East Down AC. This year, the race forms part of the newly formed Novosco 10K Grand Prix which runs until November. We had an Errigle of Dubs at the start line taking in the rays:

Great running folks on the hilly return route around the town.  Those are all times to be extremely proud of and I also hear that it was a great day for run and it also comes highly recommended as s race  – even if the Dub who recommended it to me was beaten by a 65 year old 😉

Addiction 10k
What is now fast becoming a stalwart of the local running scene, the Addiction 10k follows the familar route of the Seeley Cup 10k in and aroun Ormeau Park in November.  The (thankfully) mostly flat route takes the runners two and half times around the park.  We had the one representive taking part:

Really well done Danielle – and only a week after the 10 mile too!  What adds to your time is knowing that you ran the race while nursing an injury so great running to get across the line and home.

parkrun
If you weren’t spurred on by the parkrun report in Wednesday’s Belfast Telegraph – with one of our own interviewed promotion Ormeau (and the fact that he “couldn’t run a bath”” before he started running) – then nothing will get you out of bed on Saturday morning… well except the 14 Dubs who did get out to the parks:

Special mentions this week to, well, EVERYONE!! No firsts, seconds or third home, no new PBs and no newbie PBs this week – just getting out there and enjoying our unseasonable Spring weather this weekend! Sure isn’t that what parkrun is all about!

Warmdown
I might have RSI this week from all the typing – just isn’t that a great complain when there is so much good to report from club!  I’m very happy with the bit of shopping I did over the weekend, where I bought a CD of Prince’s “Greatest Hits” for just under 20 quid… Now I’m going to party like it’s £19.99.

Disclaimer: Every effort (read: a little) was taken to ensure the results above are correct. If you’d like to make a complaint then you’ll automatically volunteer yourself for writing duties next week 🙂