From quizes to marathons to parkruns – all this week’s results over the jump!

Introduction
Here we are – another week closer to the prospect of having to complete these races that we’ve all be diligently training towards.  It has been a busy and fast week for the club – and one that we discovered that Mount McKinley is now called Denali (who knew).  Before we get to the results, I wonder if you ever heard the story of Charles Dickens walking into a bar.  “I’ll have a martini there Bosco,” he requests, before the barman replies “Olive or twist?”

Mencap Fundraising Quiz Night
A huge huge thanks to one and all of you who came to the quiz in Errigle on Friday night. The turnout was absolutely phenomenal – Nessa and I were overwhelmed with the support and generosity of all who came and made the night such a runaway success!  As well as that to all who have contributed both on and offline a huge thanks.  As a result of this I am delighted to say we have hit the magic target for Mencap.  A special thanks for those who donated prizes for the ballot and to the fabulous quizmaster who we couldn’ve have done it without Ronan.  Take a bow one and all – to all our friends and family (far and wide), club members, work colleagues and sponsors – you are the best and I am blessed.

Carrick Coastal Marathon
So the cool kids are now calling this series “EAMS” (“East Antrim Marathon Series” of the uninitiated among us).  The route began at Carrickfergus Castle and follows the coastal route to Loughshore Park and back –  hence the ‘coastal’ part of the title – and to complete the marathon distance (as there was also a half marathon) you had to complete the circuit three times.  We had two brave Dubs out there:

Absolutely stunning times guys, especially considering the “poppy weather” (yes, I paraphrased) and also a warning to all the kids out there – that a pub quiz and marathon on the same weekend don’t mix… a part of me would like to think it was the mental fatigue from the difficulty of the quiz questions, but for some reason I don’t think that this is the case.  Great going guys, you should be proud – we even got a photo of ye’s: 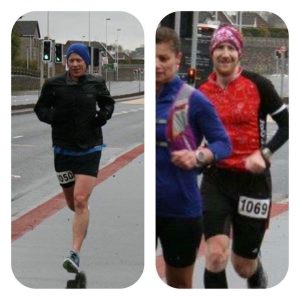 parkrun
I often wonder how boring the parks across the world must have been before parkrun kicked off – empty paths, no teas & coffees and most scarily of all – no buns!  So isn’t it great that now we congest the paths for a half hour or so every Saturday morning to get our weekly fix of 5k running with friends.  Here’s how the club got on this week:

Fantastic running everyone – I think the nicer weather on Satuday morning helped a lot this week! Special mentions this week to James who was second home at the Queen’s event. Also this week we had some new PBs set by Tierna (at Queen’s), Kathy (at Ormeau) and James S on his 51st run (at Stormont).

Warmdown
There we go – another roundup wrapped up!  Two things this week: 1) did anyone do the RunHer over the weekend?  I checked the results and couldn’t see anyone!  2) More photos please!!  Bring your families and friends, take selfies – let make thre roundups pictur-ific… that’s a word, I swear.  After the quiz, I rushed off to host a variety show, and introduced the first act on stage: “Please welcome the bailiffs… take it away boys!”

Disclaimer: Every effort (read: none) was taken to ensure the results above are correct. If you’d like to make a complaint then you’ll automatically volunteer yourself for writing duties next week 🙂

PS – If I seemed a little lost at times on Friday, there is a reason that I was all at sea, it was becuase someone asked me to be more pacific on some of the questions.