I’m tired from sifting thorugh all the results so far.  Find out more over the jump!

Warmup
This week I think that we hit a new record for the numbers of Dub’s taking part in races in a single week (this job is supposed to be easy).  Find out what we’ve all been up to soon.  On Saturday, I went to the library and asked for books on paranoia, the librarian told “They’re behind you…”  Okay, some results!

Queen’s 5k Race Around the Bridges
If you want to run a good local k where you can have a great attempt at your PB time then this is race for you!  From King’s Bridge to Ormeau Bridge and around the enbankment the two and a half loop race is one of the most hotly contested races of the year – and we had a strong showing of Dub’s who took to the startline:

Woa – great running folks, some absolutely great times there from everyone!  I’ll be honest with you all, I have no idea about PBs or anything, so if you got a PB or did something (even more) special on the night, could you let me know and I’ll update the standings please?!

Hill & Dale: Race 2 – Tollymore
Once again, the Hill & Dale (not named after one of our own fine members) series has a perfect evening for their second trail race of the series, and we had a brave Dub out there:

Fantastic running Maura – second year in a row tackling the very challenging route.  I hear from people who were at it, that the weather made up for the tough course – I hope that is right!!!

London Marathon
We all know abuot this one – no matter if we watched it on TV, listened to it on the radio, tracked on the website or app and were there in person to cheer people on – the London Marathon is iconic.  Sometimes, you don’t have to say very much about the results:

Absolutely fantastic showing from all the Dub’s taking part on Sunday.  Plus: Brian, Neil, Nessa and Roisin all posted PBs times too!  A great day for the club, and we all hope that you’ve (or are taking) a few days well deserved rest now! 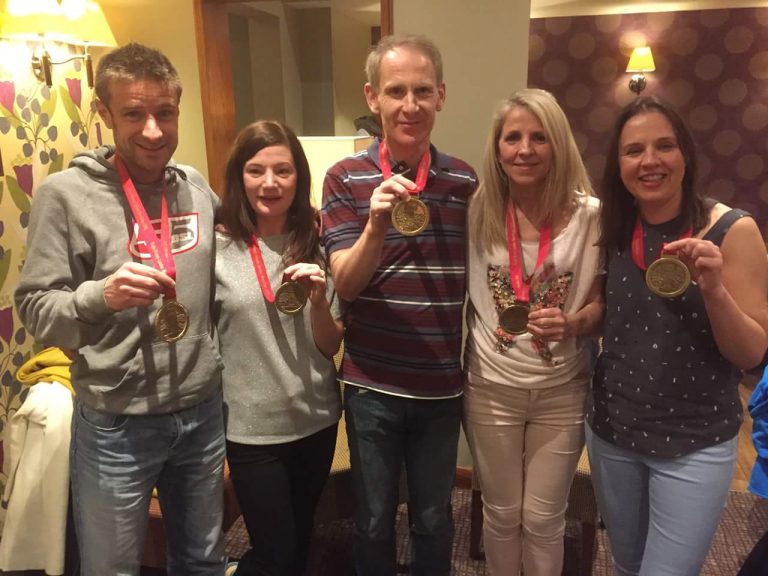 parkrun
A great wee morning for a run Saturday was!  Taking advantage of our recent spell of good weather, waking up early and going for a 5k event in the park!  It seems that this week, there was an Errigle of Dub’s eager to get out there:

That took a while to type all this up!!  Well done everyone, you always feel good after starting the weekend this way.  As always we have some hat tips to dish out and second over the line at Queen’s was James T. We had new personal best from Lisa (at Armagh). As usual, we end with newbie PBs, this week from Roisin & Nessa (at Mile End), James S (at Southwark) and Michael (at Ormeau).  Let’s not forget good friend of the Dubs, Niall – who was at the Derry City event and not only was first home, but also set a new PB for the course too!

Warmdown
Phew!  We made it through the roundup this week.  If you’re still with me – great.  If you you aren’t could you give yourself a little nip to wake up again please!  Going to repeat my usual call for photographs from races please 🙂 Finall, I want to tell you a story, the missus told me grow up over the weekend.  Can you believe it?  I was speechless…  Well, I suppose it is hard to talk with 45 gummy bears in your mouth.

Disclaimer: Every effort (read: I really tried this week!) was taken to ensure the results above are correct. If you’d like to make a complaint then you’ll automatically volunteer yourself for writing duties next week 🙂