parkrun, 10k and a half marathon feature this week – more over the jump!

Warmup
Welcome one and all to the final (May) edition of the weekly roundup, where I go through the results to be nosey, so that you don’t have to!  You know, before we look at the results, the weather this week has reminded me of my childhood summers, where we would climb inside old tyres and roll down the hill – they were Goodyears!  So, the results…

Reminder: NI Running Mile – This Friday
Want to try and get yourself furter up the Wava league?  Then never fear, the next race for 2016 takes place on Friday at the Mary Peter’s Track where you can compete in a timed, one mile race.  More details, including details on your race category (its by time, not age) is online at NI Running.  Speaking of the Wava league…

Latest Update: Wava League
James has kindly supplied us with the latest revised standings for the club’s Wava lwague.  Leading the way, is last year’s male winner Brian D closely followed by Dale and Mark.  Collette still leads the female race, but the trio of Anna, Heather and Paula are in close pursuit.  Check out the Wava league for the full standings.

Great running James and Richard – and of course to good friend of the Dubs Suzy for completing the trail race on Tuesday!  I hear that James was chopping and changing for the lead with in a good auld tussel!  Richard, you’ve been named now – time to get that stuff from the car!

Mayfair 10k
An early weekend trip to Ballyclare – not the place on the Monopoly board – was on the cards for some club members to take on the undulating course round country roads in a most scenic setting. Let’s take a look at who was there:

Great running gang – and a second mention this week for Suzy, our friend of the Dubs.  That tricky course, in the warm weather from the morning, made it quite the difficult day – so great running by the two of you!  We even got the obligatory photo too… James look far to happy and fresh to have just run 10K… 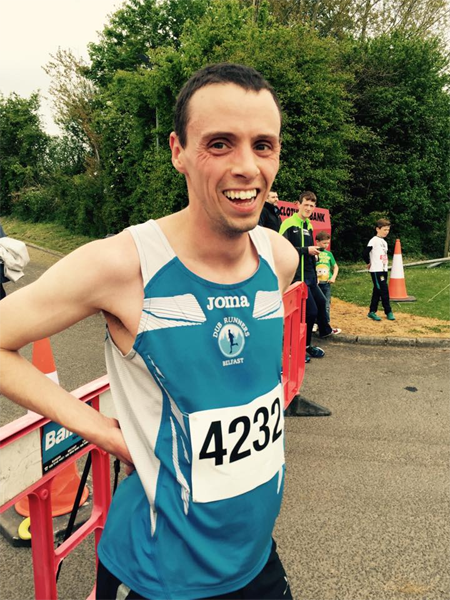 Newry Half Marathon
If Sunday wasn’t warm enough for you, then you could have taken on a half marathon!  The annual Newry 10k, half marathon and marathon races took place on the undulating and scneic Country Armagh countryside on a blindingly hot Sunday morning.  Of course, we had some brave souls out on the cource:

Those are great times from our intrepid trio of runners, in somewhat tricky conditions with the heat (Dub Top Tip: wear sunscreen) during Sunday.  Of course, for anyone counting, this was the fourth race (out of ten) in the Half Marathon Series this year, the fifth, and final race of the first half, is the Lisburn Half Marathon in June.

parkrun
This Saturday past it was a case of – “… come on, let’s get out before the rain hits us”, with a bright fresh morning and the prospect of heavy rain showers throughout the day, the morning was considered the best chance to get in a weekend run while staying dry.  Considering that, for most (not me though), it was a bank holiday weekend too, we had a great turnout around our parks:

Absolutely magic running by everyone this weekend, really well done everyone!  A special hat tip to our Roisin, who continues her return from injury, with a cracking first over the line at the Colin Glen event.  A stack of new PBs were set this week including from Jane (at Queen’s), James S (at Portrush), Karen (at Wallace) and last, but not least Alastair (at Ormeau)!  We had two newbie PBs as well from Heather (at Ormeau) and Roisin (at Colin Glen).

Warmdown
Don’t forget, even though the sun is shining and we all want to have a BBQ, that the club is on as usual on Tuesday and Thursday evenings this week.  Also, be sure to bring your cameras with you to any upcoming races – we’ll take all the photos we can get!  I was boarding a flight over the weekend and a vulture tried to get on carrying two dead raccoons.  Luckily, the flight attendant said “Sorry sir, only one carrion item per passenger.”

Disclaimer: Every effort (read: you try this!) was taken to ensure the results above are correct. If you’d like to make a complaint then you’ll automatically volunteer yourself for writing duties next week 🙂