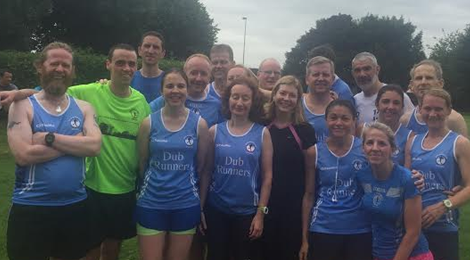 A Wava parkun, 10 mile race and a half marathon over the jump!

Warmup
Well folks, another week close to Christmas (that’s right, I went there)!  Fantastic to see the buzz created by so many members running the Victoria parkrun event over the weekend.  Before we take a look at the full results, I have a joke for all you mind readers out there…

Portaferry 10 Miler
For anyone at training on Tuesday evening (we did the 5k session in case you’re having trouble remembering) you will know just how warm it was – so, imagine running 3 times more than our session, and you get the distance ran by the club members in Portaferry. Under the blistering sun of Tuesday evening we had six club members line up at the start line:

It was nice to see quite a few Dubs tackling the mid-week race (those don’t happen too often).  Having spoken to a few people who ran the race, it most definitely wasn’t an evening to target a PB over the course (unless it was your first time), so especially great running by everyone on Tuesday – we all tip our hats well done for being able to cross the line!  Apparently, all bar one, were camera shy:

Dervock Half Marathon
If you are a fan of Game of Thrones – then this is the half marathon race for you. Dervock hosts the annual race which takes place in the scenic countryside locations near Ballymoney and take in the ‘Dark Hedges’ the famous filming location in the hit HBO show. We had one brave Dub tackle the course this year:

From experience (and memories), Dervock is not the easiest half marathon on the calendar to complete – but really well done Andrew on completing the course in such a great time!  My only complaint is – where is the obligatory photo of your running through the Dark Hedges?!

Divis 10k Trail Race
Sometimes going for a nice leisurely stroll up Divis mountain just doesn’t cut it – sometimes you think ‘let’s just race it instead’ – and for one club member that exactly what they did.  Once you get over the killer hills of the first two miles and begin to aim for the summit, the spectacular views of Belfast City become more visible (not that anyone had a chance to look at them)!  Of course, what goes up – must also come down, racing towards the finish, letting gravity do its job!

That is magic running Marcy, especially on a hilly trail route – it paid off not going Newcastle last weekend!  most of us know just how tough these trail races can be, so it was great to see you running, representing the Dubs – always with a smile on your face: 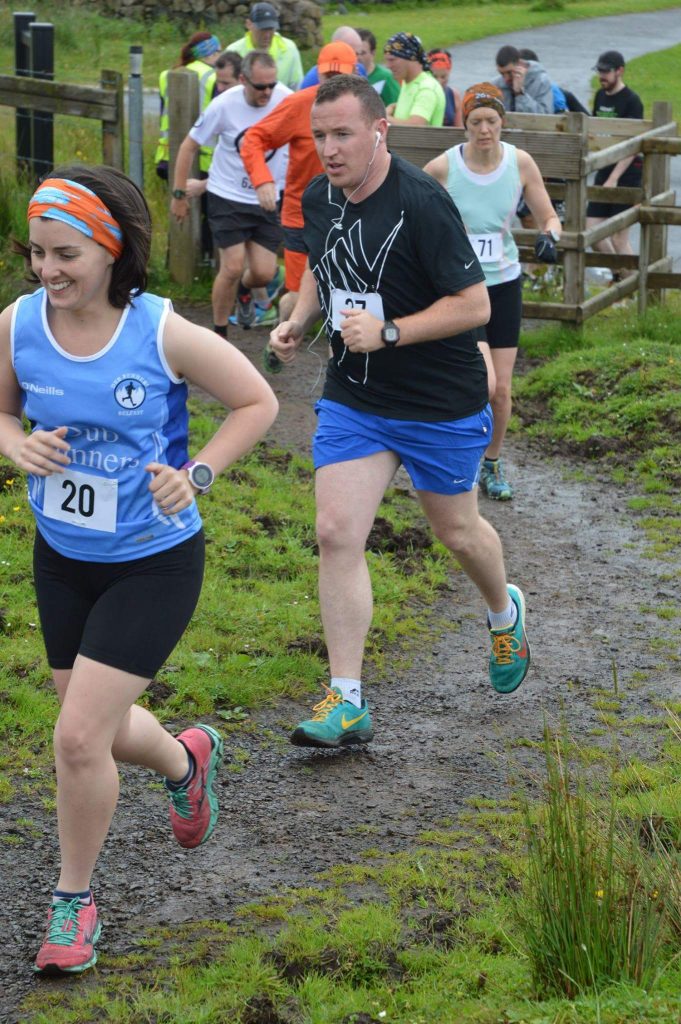 Marcy at Divis 10k Trail Race with a big smile!

parkrun
A special parkrun weekend was in store for the club this week, as an Errigle of Dubs made the journey to Victoria Park as the Wava League hits the midway point. In a change from the usual, we asked club members who were able and willing to turn up at this event and it would count towards their points total in the all important (and highly sought after) league. As you can see, our call was heard:

Absolutely magic running by each and every one of you on Saturday morning – I think that the fresher conditions helped a lot. There is an extensive list of hat tips this week, first off this week to James T who was first home at the Victoria event. We had some new PBs set this week by James T, Jim and Nessa (all at Victoria). Some newbie PBs from John, Alastair, Mark, Amy, Anne and Geraldine (all at Victoria) and Joanna (at Princes). Our final hat tip has to be given to the man who’s just completed his 50th parkrun – which is a great achievement in itself, but he has also ran 50 different parkrun events in the process – it might have taken a few extra years, but it was totally worth it! Really well done Mike!

Warmdown
Phew, that was a bit of an effort this week!  My thanks to my spies this week for supplying me with some awesome photos to use through the roundup – because let’s face it, you’d rather see photos than read any of the I’ve written here!  With that in mind, anyone got an injury that they’re nursing at the moment?

Disclaimer: Every effort (read: live with it) was taken to ensure the results above are correct. If you’d like to make a complaint then you’ll automatically volunteer yourself for writing duties next week 🙂