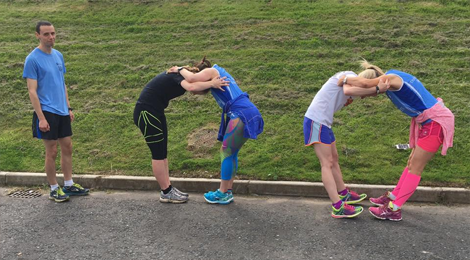 It was a Giant week for the club – more over the jump!

Warmup
A strange one this week, when the focus of the local running community was on us for our annual trail race – so let’s turn the tables shall we?!  Before that, I must tell you that I went to Tesco during the week and was able to swap 50 raisins for 100 sultanas – I can’t believe the currant exchange rate.  I hope that joke gave you the perfect raisin to smile, after all, it is a berry good joke.  Now, let’s see what we have been up to:

Giant’s Trail Race
A lot has been said over the last few days about the trail race – and I hope everyone enjoyed the evening, and we’re so thankful that the weather was on our side this year too!  Can I add my personal thanks to the entire team who helped out at the start and finish – I’m not going to name or single anyone out (for a change), but as this is where I was based for the evening, I wanted to thank you all for putting up with me.

Brougshane 5k
If parkrun isn’t for you there are always alternatives.  This weekend the alternative was just outside Ballymena, kna route beginning on the main street, heading towards Ballymena before looping back.  We had a sole Dub in the field:

Woohoo, great running Maureen!  I hear that it was tricky course, but that the scenery more than made up for it in the day!

Titanic Triathlon
Is naming an event after a ship that sank ever a good idea?! Anyway, if you were wondering whybthere were so many roads closed off on Sunday morning it was to allow a group of people to swim for 1500m, then take a 40k cycle and 10k run around the city centre.  We had one Dub brave enough to face it:

John’s the man when it comes to these tri’s and looking at tjkse times – we can see why!  Great work!  Does anyone else feel like they wasted their Sunday?!

Cookstown Half Marathon
The latest race in the Half Marathon Series (am I still allowed to mention this series?!) took place on Sunday in Cookstown.  With the sun beating down, a reversion to the 2014,with slightly more tree shelter was welcomed.  We had two Dubs out in the heat:

Great running Richard and Jenny – that “old” course is tough – especially the hill approaching the mid distance point!  Nice work fighting on and you both deserved to out your feet up in Sunday evening (though I bet you both didn’t)!

Crossgar 10k
It was a great evening for the annual 10k in Crossgar.  The usual course: fast but undulating with a few tough hills around the 5k mark, before a fast downhill to the finish.  Just the one Dub out there:

Mega, mega running Jim – no bother to you at all – you make it look so easy!!  Apparently there were a million photos taken on the night – but not one of our Dub!!  That slight omission was made better by the fact that the spread after was excellent.

parkrun
An ideal Saturday morning of weather conditions awaited the club as we took to the start lines across various parks. The only downside was the several sore heads after a successful Friday evening. We had a plenty of Dubs availing of the fresh morning breeze to go for a 5k run:

Congratulations and the beginning of our hat tipping this week must go to James Trainor – who completed his 100th parkrun on Saturday (more on that in a moment). Other special mentions have to go to the duo of Dubs (and one former Dubs) who nabbed the top three spots Queen’s – Niall, James and Brian D. Some newbie PBs by friend of the Dubs – Niall (at Queen’s) and Jackie (at Bere Island). New PBs were set this week by Ronan (at Queen’s), Brian C (at Colin Glen) and Karen (at Killarney). Now, an obligatory photo session was called after the Queen’s event to recongise James’ 100th parkrun – and with Paula at the helm: 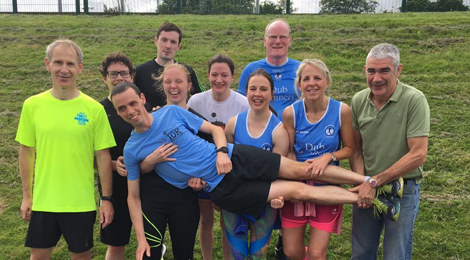 Warmdown
That was a great week for the club – and nice to see we all still managed to get in our traditional weekend runs despite all the activites (and celebrations from Friday evening)!  I was writing up the last few chapters of my autobiography over the weekend, and I accidentally spilt some glue all over it – well, at least that’s my story and I am sticking to it.

Disclaimer: Every effort (read: if you only knew) was taken to ensure the results above are correct. If you’d like to make a complaint then you’ll automatically volunteer yourself for writing duties next week 🙂