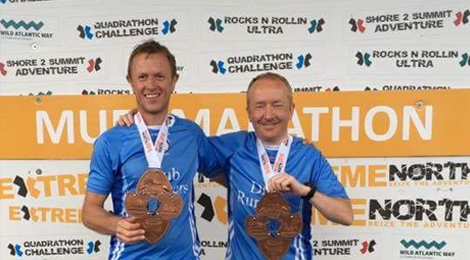 It’s bumper double roundup this week – more over the jump!

Warmup
It has been a while – I was off gallivanting the last two weeks and had the best of intentions of doing the roundup while I was away, but the lurgy got the better of me.  Not to worry, normal service has resumed.  Lots and lots and lots and lots to get through this week.  While I was off on holidays there, I took some time to go to the local hardware store and run around the place with a screwdriver shouting “ladies and gentlemen – this is not a drill”.  Okay, let’s get caught up with what is going on!

Bangor 3000m (Early July)
I believe that this took place a number of weeks ago, on a Tuesday evening, where James turned up for a meeting at teh Dub, then headed for the Bengor Sportsplex running track for a 3000m race.  In true James T style he aced the run:

Magic running JT there with that performance – considering I struggle to run a single in in under eight minutes (just a rough guide for everyone – makes it all the more a fantastic result.  Not to mention the top five finish in the wet as well!  So the key to running fast is relaxing and acting like you’ve not a care in the world before a race!!

Crawfordsburn 5k Trail Race (3rd August)
We had a number of runners take to a beautiful but challenging course.  Starting off in the forest park, through very picturesque trails, along a river and under an impressive red bricked viaduct bridge.  Undulating with a few particularly steep hills (especially at the end) before the breathtaking scenic Crawfordsburn coast line for about a km until the final ascent.  Let’s see who was out there:

Absolutely great running folks, on what I hear was “definitely not a night for any PBs”.  That was a painful route, we can only hope that the views and scenery made up for it all on the night.  Oh, and we even had an auld photo supplied to me, so I was obliged to post it here: 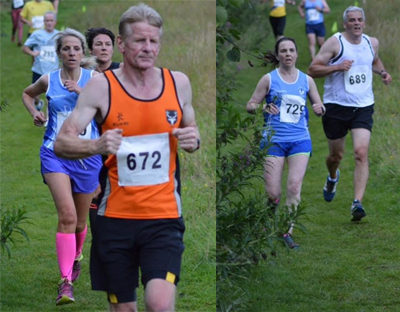 Stanley Reid Memorial 5 Mile Road Race (5th August)
Cookstown, fresh from their half marathon hosting dutues put on a five mile race which was popular with a lot of mid-Ulster clubs.  The course was a circuit around the quiet roads near Loughry College – with a few gentle hills for added enjoyment.  While officially stated as a five mile race – many of the runners clocked it at pont one miles longer – so they’ve all taken a few seconds off their officially posted times:

That must have been a strange one for you John – not doing a swim and a cycle before going for run (unless you did that for a warmup?!)  That is a great time, and on a Friday evening too – fair play to you!

Feile 10k (7th August)
This new fixture on the calendar which according to its official website “takes in the gems of The Gaeltacht Quarter and the resurgent West Belfast” (that’s a new quarter on me).  The “bloody tough” route began in Falls Park, heading up to the Whiterock Road, around by the Glen Road before finishing up at the park again.  We had several Dubs take to the start line:

Excellent runing folks – on what I am reliablly informed was not the easiest of courses!!  A special hat tip to Noel on his top ten finish!  It looks like this one might become a regular favourite in the local running scene too.

Mourne Seven Sevens Challenge (13th August)
The wa?!  I know I asked too, so it is a one day event, 18 miles over seven peaks of the Mournes – each over 700 meters high.  I had a very proud daughter contact me to tell me what we had one very brace Dub take the to the start:

Martin that is a fantastic achievement – and this is your 8th time running the event too!  Not to mention youn were just shy of your PB on the course too – that is impresive!  You even had family on the finish to take a photo: 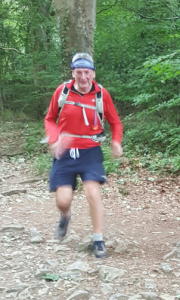 Groomsport Half Marathon (13th August)
Is it that time of the year again… only seems like yesterday!  Now in its third year, Groomsport held its annual costal 10k / half marathon race on its now traditional Saturday morning slot.  The double loop route, with one steep hill repeated twice for good meausre, sweeps around the village before taking runners back on to the main street for the finish.  We had quite a few Dubs take to the start line:

Fantastic running everyone – not sure of any PBs on this route, at least none that I have been told about.  It is a tough route, especially when you know that you have to do a second loop around!  Some excellent views and always a nice costal breeze around half way and at the end helps to boost the spirits.  Great running, and the second-to-last race of the HM series this year.  The Dubs even had time to stop and pose for a photo and send it on to me: 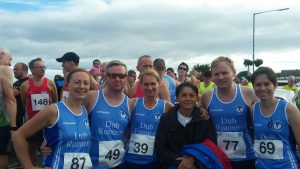 The Dubs who ran the Groomsport Half Marathon

Tandragee 10k (14th August)
The village in Armagh hosted the next race in the 10k race series over the weekend.  An ideal day with good conditions, mixed with a mostly flat course with some beautiful views awaited just one Dub on Sunday:

Well done Alastair – only four more races to go now in the series to complete it!  No pressure, but I’ve just told everyone!!  This race comes highly recommended – getting a nice medal and goodie bag complete with salt and vinegar crisps!  That’s me sold for next year anyway!

Quadrathon (11th to 14th August)
Ever driven the Innishowen 100 mile route?  Ever thought: ‘It’d be cool to run this some time…’ – nope, me either!  We did have two Dubs tackle four marathons over four days in the beautiful (and hilly) county of Donegal.  Race 1 (Thursday) took in Kinnego Bay, while Race 2 (Friday) took the victims further north towards Malin Head.  Race 3 (Saturday) was the mountainous Mamore route before finishing off with Race 4 (Sunday), right on the border with the Muff Marathon.  Let’s have a look at how the guys got on:

Amazing.  Totally amazing.  Unbelievable.  I mean, we all knew that you could do it – but to see the updates roll in each day and know that you were 26.2 miles closer to that target each time.  What a great feat to be able to acomplish – over some really tough and demanding routes.  I hope you guys are taking a well earned rest this week – and having the odd drink or two to celebrate finishing.  I searched for a good photograph to post here, and this one I found, to me, sums these two guys up – running and enjoying it: 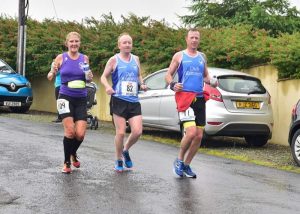 parkrun (6th August)
Not going to lie, I am getting very tired at this point, so let’s keep this brief and see who was up and running around the various parks last weekend, including an international parkrun event too:

Woo-hoo, great runing everyone – isn’t it great kicking off the weekend with a quick run around the park!!  Hat tips last week go to Nessa who was first home at the Waterworks event, and James T was on international duties crossed the line third in Krakow.  We had some excellent new PBs set by Peter (at Queen’s) and Jackie (at Colin Glen).  Finally, while off on holidays, James T got himself a newbie PB for his efforts too!

parkrun (13th August)
When they say that a Mars a day keeps the doctor away – it could be said that a parkrun a week keeps you in good physique!  Let’s take one last look what what 5k runs were completed on fresh and bright weekend morning:

Brilliant running everyone, great to see so many of the club active so early on a Saturday!  This week we need to tip our hats to James T who was first over the line at the Limerick event, and also to Rachel who was second home at the Valley event.  We also had a single new PB set by Ryan (at Ormeau).  Rounding things off this week, James T for his newbie PB (at Limerick).

Warmdown
Pens down, stop writing!  Phew that was a mammoth task to work through.  My thanks to all my little birdies who helped to get this edition out the door.  As my boss would say “team sport”!   You know, people say my hobby of filling farm animals up with helium is morally reprehensible, But I say to them – whatever floats your goat.

Disclaimer: Every effort (read: jet lag sucks) was taken to ensure the results above are correct. If you’d like to make a complaint then you’ll automatically volunteer yourself for writing duties next week 🙂