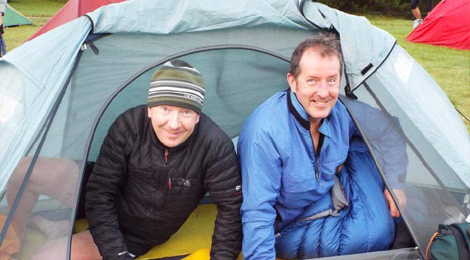 Two triathlons, a half marathon and the usual parkrun over the jump!

Warmup
Well, there’s a bit more of a buzz around the club this week, as we change gear and head towards the next set of races.  Before we get there, I’ve been a bit down recently, and the missus keeps telling me “Cheer up, it could be worse. You could be stuck underground in a hole full of water.” – I know she means well.

Pulse Port Beach Triathlon
Port Beach, Clogerhead in the Country of Louth played host to the latest race hosted by Pulse Triathlon.  Competitors started bright and early at 8AM where they tackled an open sea swin followed by a costal cycle and run to round off the day.  Say what you want, but I can find very little information of any great detail on this, so all I can say is that our John was there taking part:

Fantastic John, another great triathlon under your belt.  It was a lovely day, if a little warm for taking on the challenge, but you kicked some butt out there on the day!  Disapointed there wasn’t a few photogrphs thought?! 🙁

Glens of Antrim Ttriathlon (or GOAT for short!!)
After a night full of culutre, stressful rugby and a quiz, what better way to shake off the night before than with the annual GOAT triathlon!  A 750 meter swim, followed by a 21km scenic cycle rounded off with a 5k – all set in the stunning background of the Glens of Antrim.  Our illustrated leader was there:

Great going Brian, pumping in really competitive times despite the tough cycle – 5 miles up the glen.  Then a very hilly, off road run, along the scenic coast path.  No photos as requested though 🙁

Mourne Mountain Marathon
How would you follow up doing four marathons in four days?  By going ahead and doing a marathon over the Mournes of course!!  Choose your own route, hitting the grid coordinates as you go.  An overnight camp – and be selfsufficent carrying all your camping needs with you.  Sounds easy doesn’t it… nope, me either.  We had one Dub and his brother tackling the course again this year:

From the warmth and struggle on Satruday, to the wet mist of Sunday, over cross country and bogland, from Fofanny Dam to Silent Valley to Tollymore – that is absolutely fantastic going Larkin bros!  Now, go home, put your feet up, and lock the front door – so you can’t go out and run anymore!  And sorry for not putting an update on the Facebook page – I’ll make amends next year!  Jim also sent through one photo of the event, which he told me is for the ladies: 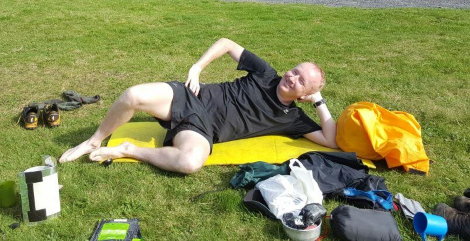 Jim at the Mourne Mountain Marathon

Belfast Half Marathon
Now in its third year, the half marathon took place on its traditional route from Ormeau park, towards east Belfast, through the city centre, up to the Falls and back to the park again.  Significant hills towards the Falls ares and when heading back to the park added to the challenge of the crisp morning.  We had an Errigle of Dubs taking to the very early start line for the race:

Absolutely fantastic running by each and every one of you, in conditions that gradually turned unfavorable as the race progressed into the morning. We even had a new PB set by James T – magic!  Let’s not forget one final shout to Graeme Colhoun who was the 1 hour 45 minute pacer at the event!  I even had one photo sent to me: 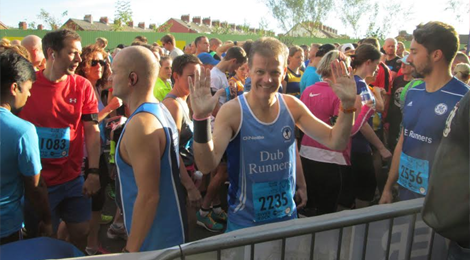 Mark gives us a smile and a wave at the start line!

parkrun
Saturday morning was a lovely, bright and fresh start to the day – so no better reason to get out and into the parks to go for a wee 5k run!  Let’s take a look and see who was out there:

Great running everyone – and a nice spread of blue tops around the various parks this weekend!  For a change the guys take centre stage this week for the hat tips, both second home at their events were Richard (at Queen’s) and Noel (at Wexford)!  One new PB set this week, which was set by Ronan (at Ormeau) – knocking 40 seconds off his previous best!

Warmdown
Timely reminder that we like to celebrate everyone here in the roundup – it is all in good fun and some craic to see how everyone is getting on!  We don’t care about times, we just like to see everyone getting out there and doing something they love!  Just in case anyone wants to join in, I’ve started a support group for people who’ve been ripped off by locksmiths – if you need me my door is always open.

Disclaimer: Every effort was taken to ensure the results above are correct (I’m only human after all). If you’d like to make a complaint then you’ll automatically volunteer yourself for writing duties next week 🙂