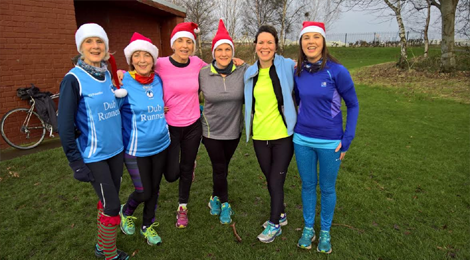 It might be Christmas – but that doesn’t stop us, find out more over the jump!

Warmup
Happy Christmas everyone!  I hope that you all ate too much, drank too much and didn’t have a single guilty thought about not putting on your running shoes!  While the festivities continue, the club has been out in force, but first, I heard that Rudolph was looking out the window on Christmas Eve and said “It’s going to rain soon!”   All the other animals laughed at him and asked how he was so certain.  He replied “Because, Rudolph the red knows rain, dear…”  So those results I talked about:

Greencastle 5 Mile Road Race
The popular and now traditional Greencastle route near Omagh is a popular race for athletes based in the North West. Unlike is recent years, it was a great day for a race, which left the participants with nothing to complain about other than “that bloody hill” after four miles! Just the one Dub lined up this this for us:

Great running Lynn, especially the very next day after Christmas (it hardly seems fair)! I’ve not actually heard much about this race this year, so here’s hoping you were treated to the Christmas dinner leftovers as a treat after the race!

Castlewellan Christmas Cracker
I keep threatening that this would be a great name for my stand-up tour – but no one seems to agree with me! One of the highlight races over Christmas, the team effort Cracker race is a trail race over a course which isn’t too dissimilar from our own trail race. A warm (for December) and bright day with ideal conditions for racing awaited the victims to who signed up:

Great running everyone, those are fantastic times and achievements and each and every single one of you should be proud (especially since I still can’t see my plate from Christmas dinner)! There was a lot of buzz and banter about this race in the club over the last few weeks so I’m glad to report that everyone had a good time and enjoyed the race! 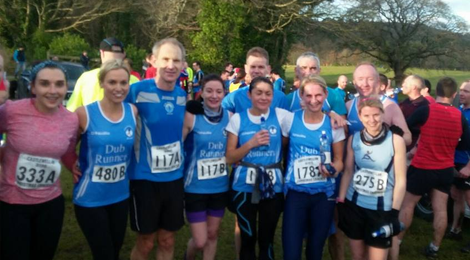 Some of the Dub in Castlewellan.

“Christmas Eve” parkrun
As Storm Babs passed over us on Friday and Saturday, it would have been easy to roll over in bed or stick Elf on and have a laugh. Instead, 29 – yes you read that right twenty-nine club members got up early, put on the running shoes and headed for the park. Let’s see how everyone got on:

Magic! Superb! I don’t think we’ve ever had as many from the club out there in one go – fantastic achievement everyone! Loads and loads to get through, starting with Steven who was second home at the Colin Glen event (and setting a new course PB)! We had some festive PBs set by James D, Ronan and Jane (all at Derry City) and we had Mark, Kate, Heather and Anne (all at Victoria). Finally, we had one newbie PB this week, set by James G (at Krakow).

“Ho, Ho, Ho” parkrun
If the previous day’s parkrun was battling again Storm Babs, Christmas Day brought in Storm Conor for a few punches. Only a few, selected, events ran on Christmas morning, but what better way to start the eating off than with a nice 5k around a park. We had a few Dubbers out there:

Happy Christmas! Hat tips go out to anyone who was able to make it out on Christmas Day (I ran a freedom run myself!!) Special mentions to Paula who was second across the line in Wallace and to Stephen who ventured to new territories with a newbie PB in Valley!

Warmdown
As we round off the year, can I take the opportunity to wish you all Happy New Year – here’s to many, many more PBs in 2017! I also wanted to say to anyone who didn’t like my jokes, or if I missed you out in the roundup during 2016, from the bottom of my heart can I say – you’ll get over it. When I was driving home for Christmas I drove through a village, where, instead of tarmac they made the roads using horse hair – I was on the maine road!

Disclaimer: Some effort was taken to ensure the results above are correct (am I not entitled to a break too?!). If you’d like to make a complaint, then you’ll automatically volunteer yourself for writing duties for the entire 2017 🙂