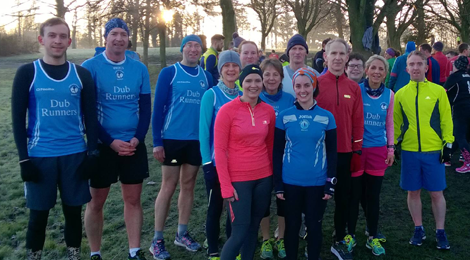 There’s flash mobs, 10ks and duathlons and more over the jump!

Warmup
It is okay folks – we’re nearly there… January is almost over – it is so close now you can almost taste it!!  New year, new venture for me, I have decided to open a glue and rifle shop, but everyone is warning me that I am too clumsy to open a store like this, but I’m sticking to my guns.  Let’s take a look at the results:

Flash Mob parkrun: Ormeau
Saturday morning, we had our frosty first “Flash Mob” parkrun where we’d meet as a club and take on one of the local parkrun events!  There was a great mix of a crowd who turned up at Ormeau park, and while some went for personal best times, others used the session as a more sociable session, getting to know more people from the club.  I’m quite chuffed to say that we had an Errigle of 18 Dubs taking part:

Really well done everyone – there was a great atmosphere and some craic had by everyone who turned up.  A special nod needs to go out to Andrew N, Mark Mc and the lovely Pippa who all set brand new personal best times for this event!  Also, as hoped, we had a few newbie PBs too from Richard C, Richard D and Mike who completed his 53rd unique parkrun event!  Well done everyone – and thank you 🙂 Also, thanks to Dub cheering squad of Nessa and John who made the effort on Saturday morning, and even helped get a picture (at the top).

Run Forest Run: Gosford 10k
Gosford Forest Park in Armagh was the venue for the latest race in the Born 2 Run, Run Forest Run 10k series on Saturday.  This is an extremely tough and challenging course, which was a mixture of road and forest track – through dense woodland with many steep hills thrown in between.  Only one Dub was braved the cold (almost freezing) weather conditions to take part in the race. Let’s have a look at how we got on:

These trail races are never easy, so really great running by Aine! I’ve not heard much about this race, other than that the post-race treats looked rather great – so we hope that you stocked up well!  Finally, a mention to former club member and Friend of the Dubs – Niall Porter – who just missed out on a podium spot in fourth place with a time of 00:37:24.

Kirkistown Duathlon
If you ever want to plan a leisurely Sunday, then maybe don’t try a Duathlon.  Participants were faced with a 2 mile run, followed by a 10-mile cycle topped off with another two mile run.  The event took place on Kirkistown motor-racing circuit with transition situated in the pit lane (no jokes about things going to the pits please) and we had six brace Dubs out there:

Making their fantastic duathlon debuts, Anna and Kate stormed to second and third spots on the podium – despite crossing the line hand-in-hand the rigorous chip timing system gave Anna a one second gap!  Meanwhile the machine James held off experienced bikemen (I changed this from elder statesmen), Gareth and Brian to finish 8th.  Rounding off a magical day for the club, Suzy recorded a big PB for the format in her first duathlon in over a year.  Feeling inspired?  Check out the list of upcoming races here.  Thanks too for the photo: 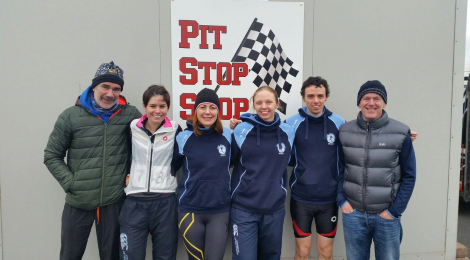 The Dubbers who took part in the Kirkistown Duathlon.

parkrun
Not everyone was able to make it to Ormeau Park on Saturday morning (the horror) so a few Dubbers still managed to get a another run in under their belts on Saturday morning.  This is especially great as it would have been so easy to stay in your nice warm bed when the frost and ice outside:

To be fair to you all, I removed the Ormeau results this week so that you got a little more prominence – fantastic running everyone, not PB weather at all, but that’s okay, it is what parkrun is all about!  I would like to tip my hat to Noel who was second home at his local Johnstown event while Kathy was third across the line at the Sligo event.  Great running everyone!

Warmdown
If you’re feeling the January blues, then why not book a place in an upcoming race?  Then, take loads of photos, send them to me, and you’ll get an awesome write up in the roundup – see there’s advantages to everything!!  I went out on Sunday night, and in case I got hungry I brought some of the leftovers with me.  In the taxi on the way home, I was hoping to pay the driver by giving him the rest of the leftovers, but I thought that that wouldn’t be fare to him.

Disclaimer: Every effort was taken to ensure the results above are correct (does anyone read this anymore?!). If you’d like to make a complaint, then you’ll automatically volunteer yourself for writing duties next week 🙂