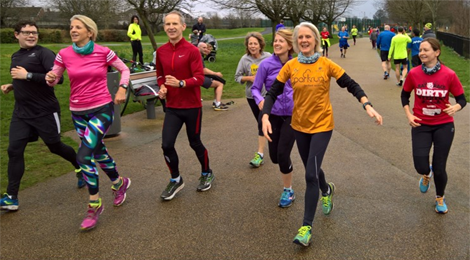 There’s 3k, 5k and a duathlon to report from this week over the jump!

Warmup
Isn’t it great to see that auld stretch in the mornings and evenings now?!  For me, if it giving me more energy, and judging by the length of this week’s roundup, you’re all getting the same boost of energy too – but more on that later!  The missus has said she’s leaving me because I’ve put CCTV all-round the house – to be fair though, I can see where she’s coming from.  So then what have we been up to?

Armagh Internation Road Race
Thursday saw the 27th annual running of the Armagh International Road Races.  The route the Mall in the centre of the town.  There was a full programme of races starting with primary school age runners through to the international men’s 5k, the women’s international 3k and the men’s open 3k at the end of the night.  It’s worth noting that the 5k race is claimed to be one of the fastest 5k road races in the world!  In excellent conditions, we had two Dubbers taking part:

That is flipping great running guys – some really impressive times.  James, after briefly occupying last place came through to finish in a new personal best and place 163rd.  The last race of the night was the fast and furious open men’s 3k with Richard, in his first outing over the distance, he finished powerfully in the top third of the standings. 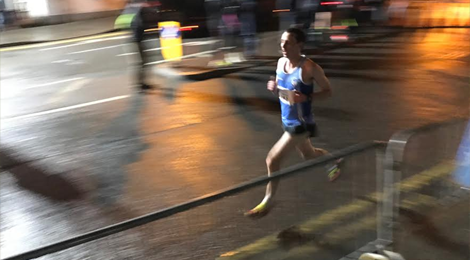 Blurred James due to his speed at the Armagh International Road Race!

Kirkistown Duathlon
Anna decided to sit a duathlon out for a change, so it was time for the fellas to step up.  Participants were faced with a 2 mile run, followed by a 10-mile cycle topped off with another two mile run.  The event took place on Kirkistown motor-racing circuit where you had to make a pit stop (hehe) for transition.  In ideal conditions we had two club members taking part:

Great running and cycling folks.  It is never easy to return to a race so soon after the previous attempt (just try parkrun every weekend), so extra kudos for that.  Some great times posted,  and both finishing in the top half of the standings – so double win for everyone!  Disappointed that there were no photos this time 🙁

parkrun
Finally!  Finally!  Some warmer weather to run in on a Saturday morning!!  Despite the ever present risk of rain, that did not deter, (… wait for it ..), an Errigle of Dubs for coming out and supporting their local parkrun events across Northern Ireland.  Let’s take a look at how everyone got on:

Fantastic running everyone!  Great to have so made of us out on Saturday morning at so many different events!  Let’s start tipping some hats – first home at the Enniskillen event was Richard.  We also had three final podium positions filled by Dubbers this week: Suzy (at Queen’s), Steven (at Falls) and Heather (at Stormont).  We also had some new personal best times set this week by JamesG (at Wallace), Eimear (at Enniskillen), Mark (at Ormeau) and Heather (at Stormont).  Finally, we had a milestone celebration this weekend, as the lovely and ever youthful Pippa ran her 50th parkrun event.  There were even some photos taken, one is at the top of the page, and the rest are in our first gallery of 2017!  Congratulations Pippa!

Warmdown
My thanks to all my little birdies who helped out with the roundup this week – this all wouldn’t be possible without your help.  While at the parkrun on Saturday morning, some guy came up to me said “Yellow, cyan, magenta.”  So I very curtly replied “Don’t talk to me in that toner voice.”

Disclaimer: Every effort was taken to ensure the results above are correct (too much cake this week at parkrun!!). If you’d like to make a complaint, then you’ll automatically volunteer yourself for writing duties next week 🙂