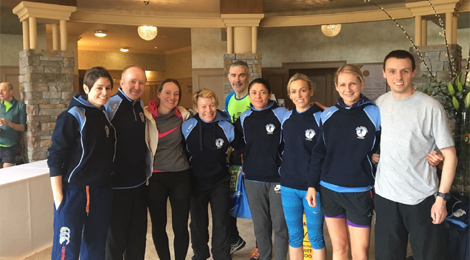 From half marathons, to five mile races to 5k races – all over the jump!

Warmup
To quote Geroge Takei – “Oh myyyy”!  What a busy club we’ve been this week, lots of races and lots of members of the club taking part.  Before we get to all that, did I ever tell you all about the time when the doctor told me that I was colour blind?  It totally shocked me, I mean, it all came out of the orange.

Carlingford Half Marathon
Just nipping across the North-South border at Newry will bring you out at Carlingford.  The race, always a favourite for the Dubs to tackle, took place in ideal running conditions on Saturday morning.  The short (but sharp) shower around one hour into the race did nothing to dampen their spirits.  We had a smaller than usual Errigle of Dubs on the start line:

Absolutely great running by everyone in Carlingford!  Really, really impressive times posted by everyone.  One hat tip that I’ve been made away or needs to go to James T – who set his brand new personal best time on the 13.1 course!  We also had Friends of the Dubs running (that’s right folks – PLURAL) – well done to Louise Jones who completed the half marathon in 01:41:10 and to Niall Porter who completed the 10k course in 35:19.  Check out the complete gallery right here, but below are some of the Dubs out celebrating after another great race (and all looking great in the new club gear): 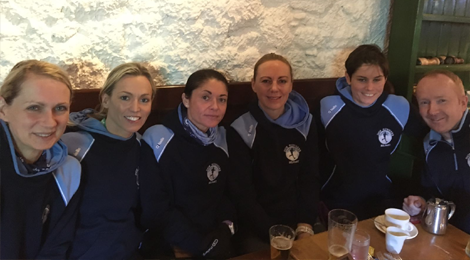 Some of the Dubs in their adopted home!

Colin Glen Five Mile Race
I’m sure by this stage we’ve all done the Colin Glen parkrun – so you’d be forgiven for asking yourself “how much tougher could this five mile race be?!”  Well the short answer is very, and the long answer if to watch out for a punch for asking!  Nothing but hills in this unique five mile race, taking in part of the parkrun route, but continuing on up the park.  Of course, some relief as what comes up – must also go down.  We had an intrepid band of Dubbers keen to take part:

Woah – such great running everyone!  Most definitely something most of us would want to take on first thing on a Sunday morning!  Great performances by each and every one of you… but we need to tip our hats to Steven managed to grab the final podium spot and Bernadette who took to the top of the female podium as first home (and by a country mile I am reliably informed too).  Well done all, you can see how you got on in our exclusive race gallery (with thanks to Steven and Angela) and a sneak peek at all the Dubs smiling below: 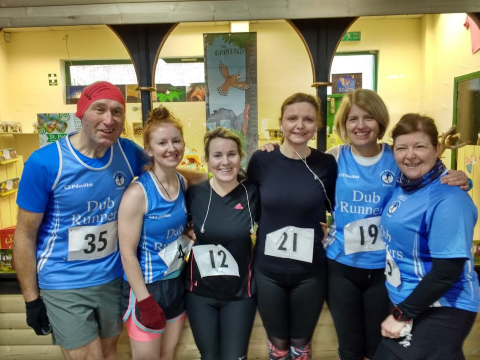 The Dubs who Ran in Colin Glen!

Addiction NI 10k
Sunday turned out to be a popular day for racing this past weekend, as the focus turned during mid-morning to Ormeau Park and the running of the now annual Addiction 10k road race.  The route is one all too familiar to the club – it is the fast, mostly flat Seeley Cup race ran in November each year.  This time around we had one Dub take to the starting line:

Fantastic running Karen – and a lovely sub-50 minute 10k to help wrap up the weekend!  I’ve not heard anything other than the results to the race, so we hope that you lapped up the fact that you did the race, and put your feet up for the rest of the weekend and took a well-deserved REST!!  One thing I did see other than the results, was a spy shot sent me by a Dub source: 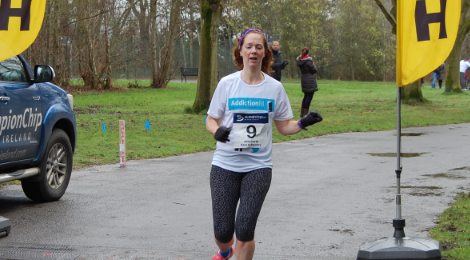 parkrun
The club experienced a truly international Saturday morning this week, as parkrun took us not only to local parks, parks in Ireland, parks in England and even as far away as South Africa!!  Locally, after night of torrential rain (did ye hear it!?), with the parks full of puddles, and to help us forget about the elections – the club decided to go for a wee 5k jog:

Plenty of tipping of hats this weekend, where everyone seemed to be third home (first time that’s happened)! So we had Suzy (at Queen’s), with Steven (at Falls), also Kathy (at Sligo) and Noel (at Johnstown) – really well done folks. With no new PBs set, we did have some newbie PBs set by the Wombling Jane (at Wimbledon Common) and Pippa on her holidays (at Bryanston in South Africa)!! Exotic!

Warmdown
Can I say a quick thanks to everyone who helped with getting results, photos and crazy details of all the races to me this week!  Far too many of you to mention – thanks!  Let’s keep up the hard work on the gallery for 2017 – and don’t forget your club gear when you’re racing!!  For those of you who are unaware, I have been doing some further studies and have been taking a course in carpentry.  Well, last night was my final exam, and I think I nailed it.

Disclaimer: Every effort was taken to ensure the results above are correct (seriously, have you seen the length of the roundup this week?!). If you’d like to make a complaint, then you’ll automatically volunteer yourself for writing duties next week 🙂