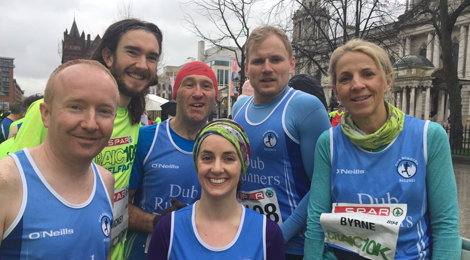 From parkruns to half marathons and more miles – there’s some Craic over the jump!

Warmup
I hope that no one thinks that this job is easy – I mean we’re only just starting the road racing season and look at the number of races covered this week!  We’ve been a busy club over the last seven days, and all the gossip is below, but before – some news!  I have just taken delivery of my new pet snake.  I was trying to work out what to call it, and after I realised that it was exactly 3.14 meters long, I settled on πthyon.  So results…

Craic 10k
When I woke up on St. Patrick’s Day morning, and heard the rain lashing against the window, I instantly thought to myself ‘Today seems like a great day for a race…’!  A new route awaited the drowned runners this year, start at City Hall, before heading towards the Falls, back through the centre, a quick loop around the docks area before finishing at the Titanic (Building).  So basically, the race was wet and windy, with slippy cobbled streets and tight turns – perfect!  We had an Errigle of eager Dubs up bright and early at 9am:

Absolutely fantastic running everyone, is what was quite miserable conditions!  I hear the course was mostly flat (I didn’t run it) – not that it mattered when you were faced with that rain and head wind for a good chunk of the race.  Of course, Friday was a day for celebrating, so there were a few trips to some local establishments to ‘recover’ after the race.  Before the madness began, we have some exclusive some images in our Craic 10k 2017 gallery, including the group shot (at the top).

Altamuskin 5 Mile Race
No? Yeah, me either… This race is described as the hilliest 5 mile race in the north… and our single Dub in the field would attest to that. Don’t we all say if you’re not up for the Craic (10k) then sure hills will be better:

Great running Richard – and on St. Patrick’s Day morning too – in that weather! Was it a medal or a crown they gave everyone at the finish?! Joking aside, good job and we’re sure it got the legs warmed up for what was to come…

Larne Half Marathon
Is it that time of the year again already?  When the running population descend on Larne for the annual half marathon event.  This year, heavy rain spells hit the beautiful coastal route, which is mostly flat except for the sneaky hill which is almost exactly at the half way mark.  Despite the weather, we had an Errigle of Dubs taking part:

That is some great running, and excellent times posted by everyone!  No PBs or anything to report (that I’ve been told of anyway), just that a great day was had by all – despite the conditions!  Also, I have checked online, and have only been able to find one photo, sent into us of Jim: 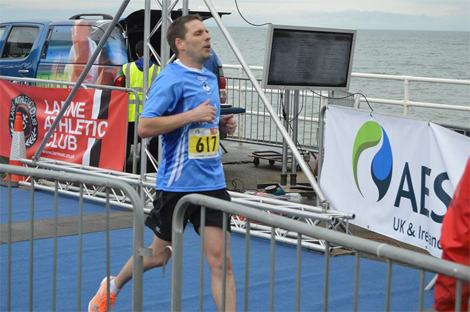 Jim at the Finish Line at Larne.

St Patrick’s Day Challenge
Ironically, not held on March 17th, instead taking a slot on Sunday, the East Antrim Marathon Series put on a unique event. All you had to do was run a 4.2 mile loop – as many times as you could in six hours. One again, only a single brave Dub was up to the challenge:

Managing five laps in six hours that is an excellent achievement and some fantastic running Richard! In what were quite good conditions for running on Sunday morning too. It all finished with just enough time to put the feet up before the new working weeks began!

Cyprus-Limassol Half-Marathon
Do you know the way everyone heads towards Ireland for St. Patrick’s Weekend celebrations? Well one Dubber and his mates decided to do the opposite and head to Cyprus for the weekend instead. While there, as you do, they rocked up and run scenic coast Half Marathon race:

Absolutely magnificent running Andrew – and what a personal best – by over 8 minutes. This is an impressive feat. Not that you need to be told this, but enjoy the rest of the holiday now… oh and in case this weather wasn’t bad enough here, Andrew was kind enough to share a photo for us all: 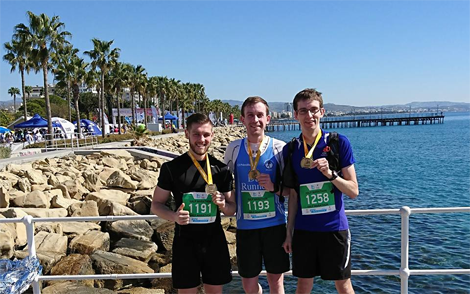 Andrew and Friday in Cyprus after their Half Marathon.

parkrun
It was almost as if the rain was watching the clock on Saturday morning.  As it ticked ever closer to the 9:30 start time, the rain appeared to get gradually heavier and heavier.  Luckily though, it was still quite warm and the rain did (mostly) stop for the duration of the run, which allows us to show you the club’s awesome results:

Great running everyone – wayyy more people out than I’d expected considering the big races on over the Bank Holiday weekend!  Let’s kick off as usual with some hat tips, first home at the Enniskillen event was racing Richard!  There were new PBs set on Saturday morning by Kathy (at Waterworks) and Steven (at Wallace).  We had a few newbie PBs set by Jane (at Waterworks) and Jackie (at Penrhyn).

Warmdown
Great to see so many of the club out and about at races this past week.  As I said earlier, this is only the beginning of the season, over the summer there’s loads of races, so if you’re taking part in an event you think I might miss, please make sure you tell me about it so I can include everyone!  I want to say thanks to everyone who has been concerned about my wellbeing recently.  I was out celebrating on St. Patrick’s night when I got hit in the head with a can of Coke – the doctors told me I am lucky that it was a soft drink.

Disclaimer: Every effort was taken to ensure the results above are correct (I’d to work on Friday, so don’t annoy me!!). If you’d like to make a complaint, then you’ll automatically volunteer yourself for writing duties next week 🙂