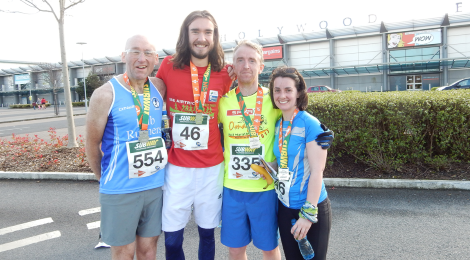 Can we leave it as “we did boat loads this week” please?  All over the jump!

Warmup
We’ve been up to a few things this past week.  You’re al just trying to keep me busy to see if I miss anything – I’m on to you all, don’t worry.  Early thanks this week to everyone who helped out with the roundup, wayyy too many mention here!  It was a busy weekend myself, I won gold at the World Weather Forecasting Championships – I beat the raining champion.  Now then, “what have we been up to?” I hear no one ask:

Queen’s Sport 5k
The clocks must have changed – so that means that the Queen’s Sport 5k (or ‘Race Around the Bridges’ as the cool kids call it) must be held.  Always guaranteed to be a fast race and attracting a wide range of athletics, the (mostly) flat course around the River Lagan is a popular one – but just three Dubs (and two chancers) stepped up to the line:

Okay, I think that I can speak for everyone in the club when I say – wow!  Amazing times folks, and I even heard that there was some jostling for positions between Steven and Brian D – always good to have some friendly competition.  Excellent times folks – we’re all looking forward to the next Flashmob parkrun event now!!

Omagh Half Marathon
Judging from the photos I’ve seen this was the 28th running of the Omagh half marathon, which has grown in popularity over the last few years, normally a staple for the North West centric racers, now attracting a provincewide audience.  A very wet day and tough course (though you’d never know from the photo below), was made up for by the great organisation and the how friendly the other racers where.  Let’s see how everyone got on:

Fantastic times and running by all the Dubs who journeyed to Country Tyrone for the race.  That course is a tough, undulating route – so just getting around it is an achievement.  We have a few hats to tip at this stage: to Bernadette, James (Jim) and Kathy who all set their new PB times for half marathon distance on Saturday!  Also to Danielle, who thought that 13.1 miles just wasn’t enough for a morning, and decided to run an extra five miles on top of that!! 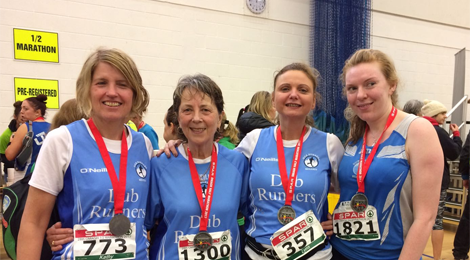 Kathy, Jane, Lynn & Danielle at the 28th Omagh Half Marathon

Bray 10k Cliff Run
Some of you might think that this is a late April Fool’s joke from me – it is not. This scenic cliff route – yes I said cliff route – overlooks the sweeping Dublin Bay and guarantees no traffic! Per the official race website the “terrain will keep you interested with beaches, sealed paths and rough, uneven trail”. So, despite all that, believe it or not, we had one brace Dub taking on the course:

Impressive running Jackie, very impressive. Not exactly your typical 10k, nor one that you’d (ever) try and get your PB time – but it sounded like some fun nonetheless! Perhaps, I could suggest, that this course wouldn’t be one for someone who doesn’t have a head for heights?! After all that, I hope that you took it easy on Sunday… (and Monday… and Tuesday)!

Subway 10k & Half Marathon
In what can only be described as ideal conditions on Sunday morning, the MS Society backed ‘Run for Research’ took place at Holywood Exchange.  The route is familiar to many as the Decathalon 10k route – only twice around this time!  With the course described as “very treadmill like” with its long and flat loops, and at times a little boring, it was an opportunity to post impressive times – and that’s exactly what everyone did:

Stunning running everyone – not just fantastic times, but times to be proud of as well.  Taking on a second loop of six(ish) miles, passing the finish line, is always daunting – but worth it for one of the Subway (lead sponsors) cookies!  A hat tip must go out Steven who set his benchmark PB time at his first half marathon event!  Also a nod to Richard D, who also ran Omagh on Saturday – but was two minutes quicker on Sunday!!To prove that I practice what I preach, Steven kindly transported me to and from the race where not only did I take a gallery full of lovely pictures, but I also threw on a fluorescent bib and marshaled the end of the course!

parkrun
On Saturday morning it was hard to know what kind of parkrun event you were going to turn up at.  With April Fools pranks and jokes flying around about the various events, a selection of Dubs cautiously made their way to the start lines at their local parks to see what was in store for them:

Great running everyone, on a fresh, if sometimes damp morning depending on where about in the country you were.  Our hat tips this week go out to James T on finishing third at the Oxford event on his first ever running of the course!  Let’s not forget Kyle (at Queen’s), who set a brand new course PB!  We also had some newbie PBs set by Suzy (at Oxford) and Pippa – who’s still off enjoying herself – (at Route 44, South Africa)!  Last, and definitely least, despite all the joking around, there was even time for a parkrun photo session: 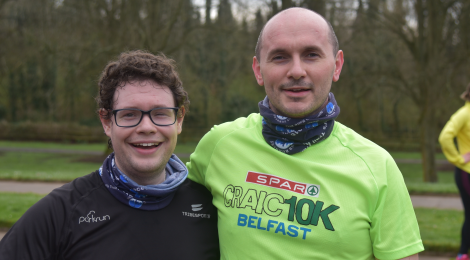 Warmdown
I’ll admit to it – Saturday’s post on the club Facebook page was an April Fools prank!  Clicking on that link will take you to your own profile… so I suppose in a way it was actually a bit of a compliment too?!  Not sure if I told you all why my ex and I broke up, but she couldn’t stand my obsession my obsession with horoscopes – it taurus apart.

Disclaimer: Every effort was taken to ensure the results above are correct (April Fools!!!). If you’d like to make a complaint, then you’ll automatically volunteer yourself for writing duties next week 🙂