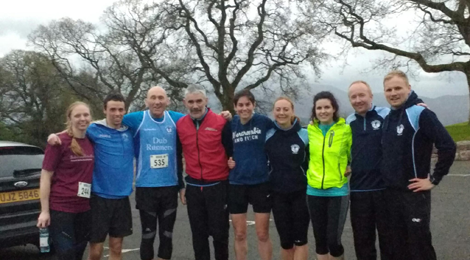 Five mile races seemed to be the focus of the weekend, more over the jump!

Warmup
Bank holidays and extended time off always means an increase in races – which is great, as it means that we’ve been up to lots and lots over the last seven days.  Before that, I was in a shop over the break, when a blind guy walks in, picks up his Labrador and starts swinging it round his head.  A little worried, I went over and asked “are you OK?”.  “Yep” he replied “just having a quick look around”…  So the results:

Hill & Dales, Race 1: Castlewellan
Proving as popular as ever with the club, the Hill & Dales series kicked off in fine style on Thursday evening. With midges chasing the victims up the hill at the start line – only to later come back to the finish line at the top of the very same hill! Set in what can only be described as perfect weather conditions – I’ve had the route described to me as “the clue’s in the name – just not enough dales!”  Let’s see how we got on:

Absolutely great running everyone, and some amazing times posted. A little hat top to James T who sneaked into the top five and to Anna – I’ve been told to say that she was flying. I hear that you all had a great time and are looking forward to the next race on Thursday in Tollymore.  Don’t they all look like they’re having fun in the photo at the top?!

Beragh 5 Mile Race
Yeah, me either – I’d to ask my parents where this was!  Basically, it is in the middle of nowhere in Tyrone.  So, without having seen the course, I’m going to call it as an undulating and tough five mile race, with nothing but animals and the scenic Tyrone countryside to look at.  Just the one Dub at this one:

Nice one Richard – a little shorter than the distances you have been running lately!!  Nice running and not a bad way to start the Easter eating either!  There’s no photos or anything available online, so I am running out of things to say right now!

Whitehead 5 Mile Race
If you felt like you’d overindulged on (all sorts of) food on Easter Sunday, then one way to not feel guilty about tucking into another egg on Monday evening would be go for a race – then the annual Whitehead race is ideal.  Just after Carrickfergus, the part side road, part main road, slightly hilly route has become a staple of Easter Monday over the last few years, and we had three Dubs taking part:

Well done to the three girls doing the Dubs very proud on Monday (I couldn’t help but notice no fellas?!) – considering I could hardly move, that is some running!  In case anyone doesn’t believe that they ran, there is a small gallery of photos from the race now available! 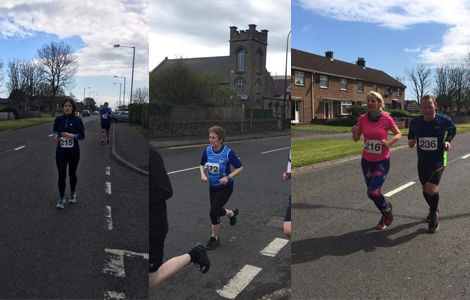 parkrun
There was a bit of a holiday feel ahead of this weekend’s parkruns.  With the prospects of big Sunday dinners and the odd (or five) Easter Eggs to be eaten, the atmosphere in the parks was jovial and fun.  So, it was great to see so many Dubbers up and at it on Saturday:

Great running everyone – no better way to get prepared for eating all that chocolate than a good round around the park!  We have two people to tip our hats at this week, namely Kyle (at Queen’s) and Noel (at Johnstown) who both set new course PBs at their respective events!  Finally, just a note to Roisin and Paul – we have eyes everywhere!!

Warmdown
That’s another week closer to retirement now!  Next weekend, we’ll have some coverage of the London Marathon in the roundup, so best of luck to Heather, Anne and Stephen for the race.  Also, to the Dub supporters club who’re also heading over, all I can say is – photos please!!!  Sadly, my laser eye surgery hasn’t worked – I’ve been staring at a tin of beans for hours now, but they’re still cold…

Disclaimer: Every effort was taken to ensure the results above are correct (what Easter eggs?!). If you’d like to make a complaint, then you’ll automatically volunteer yourself for writing duties next week 🙂