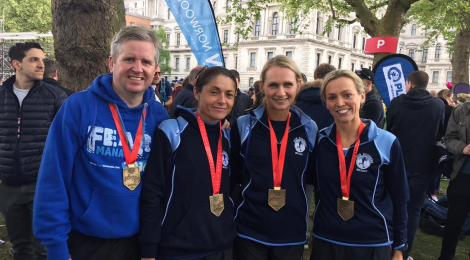 Back to the hills, parkrun and marathonsS over the jump!

Warmup
Okay, massive roundup for you all this week, that was a mammoth task getting this one compiled.  Big thanks to everyone who helped get it across the line.  I tried something new, and was late to my first Fight Club last night, so I missed them giving the rules, but sure they’re pretty obvious.  Still, Fight Club was great and I’d definitely recommend Fight Club.  Right then, the results:

Ballyliffin Coastal Challenge
A deliberate omission from last week’s edition, just to make sure that Andrew actually reads this – expect a few more over the coming months!!  The well establish Ballyliffin Costal Challenge is an aptly named course, with the race being “head windy” and the beach part was “sandy” (not my own words).  Just the single Dub was there?

Some good running Andrew, on what was a rough and tough course.  Will have set you up nicely for some chocolate eggs.  We hope that you got yourself warmed up, as it looked pretty Baltic out there: 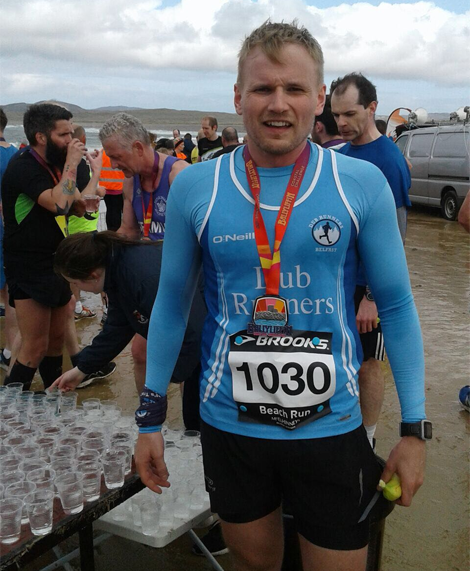 Coasting Challenge: Andrew Mc all smiles at the finish!

Hill & Dales, Race 2: Tollymore
Fancy a 4.5 mile jog on a nice, but cooling Thursday evening?  You missed a chance last week then.  The course was steeper than the first week, so very hilly with a climb on a rough trail through the forest to start.  After the open mountain, a bit of relief downhill before a final kick to the finish.  We had a Magnificent Seven Dubs out there:

Stunning performances all round – great running, and I hear that the support as you all approached the finsh was great, despite the midges!  Not long to wait for the next race if you’re eager to enter, it is on Thursday evening in Kilbroney Forest.  My thanks to Jimbo for sending on the obligatory group photo too: 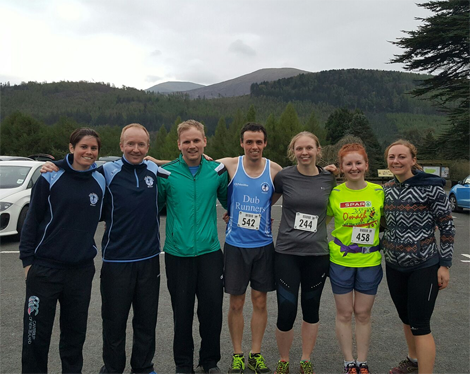 Wexford Half Marathon
Wexico (yes, I stole that one from Noel), played host to the self-described PB half marathon time course. On a hot, but windy and surprisingly hill course (considering the description), we had two Dubbers take to the start line:

Nice going folks, great times posted by the two of you.  I know as the morning heated up, the course got tougher, making Noel’s PB all the sweeter!!  It was all worth it for the ice cream at the finish (so I am told)!  I hope you enjoyed Noel’s mum’s cooking after the race!  Of course, people are hearing my pleas, and sending me on photos: 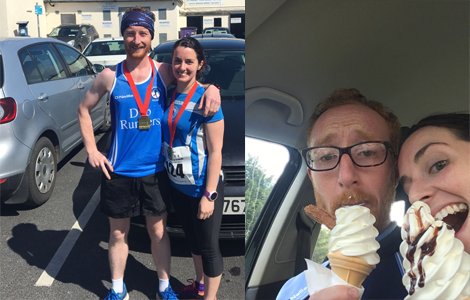 Ice to See You: Noel & Marcy at Wexford, and enjoying a sneaky post-race ice cream!

Connemarathon
Not to sound too Alan Partridge but “Ah-ha!”  You can try heading to deepest darkest Connemara along the west coast in Galway – and you’ll still get a mention!  The, let’s face it, gorgeous route ranges from sea level to about 300 feet as participants weave their way from Lough Inagh to Leenane before finishing in Maam Cross.  We had one Dub put on the camofladge gear:

Nice running Graeme, and on a warm and close day like Sunday kudos on that!  I’m sure most of us have driven around the valleys in Connemara, and not once did we stop to admire the view and think “Yeah, this seems like a place to run a marathon”!!!  So really well done on the sub-four hour time, and by the looks on their website, there were plenty of sheep there cheering on their support!  Just to prove my point that it was a little hilly, Graeme kindly send us through this photo: 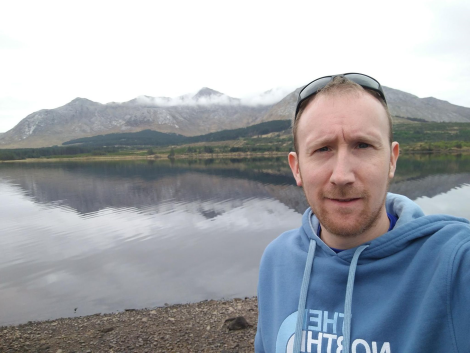 Vienna Marathon
The hills are alive with the sound of runners!  Not be outdone by London, Vienna hosted the 20th running of their marathon on Sunday morning.  The mainly flat (from the looks of it) route took participants over the bridge and into the heart of the Austrian capital, circling around, taking in the sights of the busy city before heading back to the river for the finish.  We had the one Dubber out in blue:

Fantastic running Aine and a really great time.  No bother to you, and not forgetting your running buddy and Friend of the Dubs Emma finished in 03:55:47.  Aine’s not shy of the odd selfie, and the obligatory post-race selfie had to be taken on Sunday afternoon: 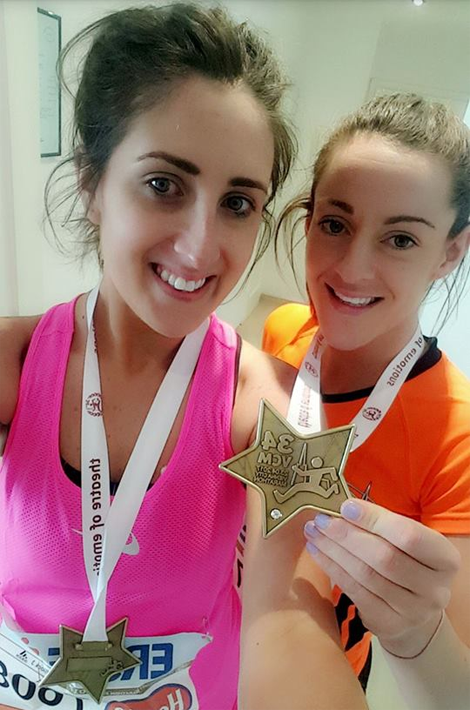 London Marathon
This is the second hardest marathon to write about (after Belfast), as I am sure everyone visiting the site knows the main points of the route.  With London being one of the biggest and most historic running events in the world, and after months of hard training, an intrepid group of Dub Runners took to the streets to reach that coveted 26.2 mile mark along The Mall:

Ah folks – well done, you’re all great and you posting some smashing times!  Fantastic running, and rest assumed not only did you have supporting crew with you, but you had plenty more willing you on home afterwards.  Of course, it’d be rude to break with tradition and not head to the pub afterwards for a few quiet ones…  We have a small gallery of photos from London, and it was great to see smiles all round afterwards from the finishers: 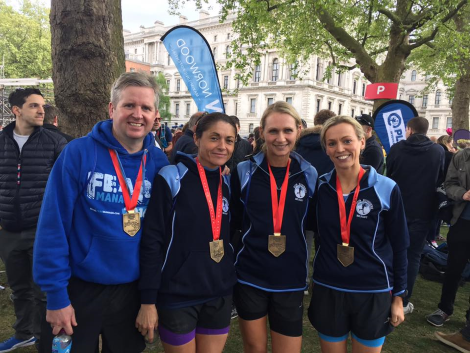 Lon-done: Just some of our amazing finishers in London!

Flashmob parkrun: Falls
As the early morning Saturday sunshine took a little rest behind some clouds, the monthly flashmob parkrun descended on Falls Park to take on their unique course.  A route, new to most, is mostly either running uphill or downhill – with very little level ground.  Of course, a challenge like that didn’t stop an Errigle of Dubs taking to the start line:

Absolutely great running folks, and some nice team running too – with nearly everyone crossing the finish line in groups.  We got podium places for James D and Steven at his local event.  Getting out and doing new events is what this is all about so I doth tip my hat to James D, Mark, Suze, Karen, Paul, Kathy, Jane, Claire and Pippa on their newbie course PBs!  A special word of thanks to the Falls organisers for their warm welcome and encouragement.  We not only had Dubbers running, but Jackie was also volunteering, cheering everyone on and taking some photos for our gallery: 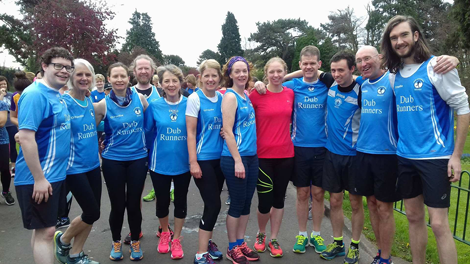 parkrun
As the government prepares to bring in new legislation towards keeping parkrun events going, some Dubbers could not make it to Falls Park on Saturday morning.  We’ll forgive them, just this once :), and take a look at how they got on:

Nice running yolks (the egg puns haven’t stopped) on a lovely morning to be out and about.  Special hat tips this week to Kyle (at Omeau) who not only set a brand new course PB but managed to take third place too!  An honourable mention this week to the Dub cheering squad of Roisin and Nessa who, despite not running the marathon, still packed their shoes and checked out the Mile End event!

Warmdown
Any doctor’s in the club who can help with my recently developed RSI?!  It’s the Belfast Marathon on Monday – so best of luck to everyone running, and of course to our three relay teams too!  Before we go, I asked the missus for “something Cuban” for Easter She got me a Che Guevara shirt – clothes, but no cigar.

Disclaimer: Every effort was taken to ensure the results above are correct (look at how long this week’s edition is, okay?!). If you’d like to make a complaint, then you’ll automatically volunteer yourself for writing duties next week 🙂