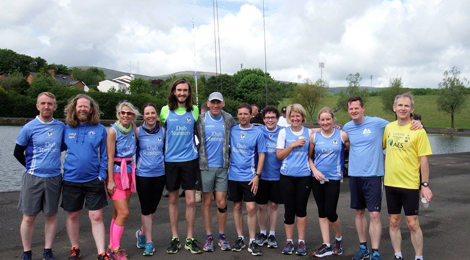 Warmup
Well, that was a fun night wasn’t it?  Big thanks and well done to organisers of our charity night at the races: Collette, Jim Paula and Ryan – give them a big hand!  Before we get to the roundup, I would like to tell you about a recurring nightmare I am having, where I’m surrounded by loads of pregnant women in labour – I think I may be having a midwife crisis.  Let’s see what everyone has been getting up to:

North Down AC: Open Track
Last Tuesday while we ate biscuits and buns and drank some tea at our AGM (minutes to follow), James T was brewing something for himself.  He was brewing up a hot lap in Bangor at the North Down Track & Field event in ideal conditions.  The just shy of 4 laps race was close, with James impressing the crowds:

Magic running James – and a podium finish to boot!  Great running AND a PB time too – we hope with times like that you’ve got the bug for this style of race!  I suppose, seen as you did so well we can forgive you missing the AGM, but can we forgive there being no photo?!

Hill and Dales, Race 6: Slieve Donard
I was asked not to include this race, so obviously that meant only one thing – including it!  I mean, the course looked rather easy (!!) didn’t it..?  If a parkrun wasn’t meant to be on Saturday, then the best way to replace it is with a run up Donard – right?!  Well that’s exactly what the Head Honcho Brian thought:

Impressive running Brian – a great time on a most challenging route.  In typical weather for around here the race was mixed with sunshine (and heat) and hailstones (and cold) – nothing a refreshing drink at our Night at the Races couldn’t fix!  This is the first race of the series where we didn’t get a photograph 🙁  Not long to wait now – race 7 at Moughanmore is this Thursday evening!

Flashmob parkrun: Waterworks
Hard to believe that we’re at our fifth flashmob at this stage – as attention moved to Waterworks Park and their compliment of ducks for their weekly event.  The park has mixture of short but steep and longer but more gentle climbs mixed with relaxing flat spells.  We had an Errigle of Dubs ready to take on the damp but warming course:

Nice running, and great to see everyone sticking to little Dub-lets of groups to pull each other around – that is exactly why we do these monthly events.  Let’s tip our hats to Steven for setting his new course PB there, and to James D, Jim S, Ducky, Paul and Brona who all set their newbie / benchmark PBs at the event too!  A special mention to Friend of the Dubs Niall – who finished second in 17:42!  Next up – Colin Glen on 17th June! 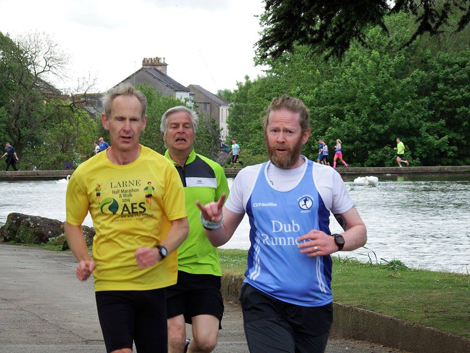 Waterworks Rocks: Paul completes number 50 with Brian D by his side.

Coast to Coast Mountain Race
I hear you asking a few questions: What’s more fun than climbing Donard?  Running 20 miles through bogs and up the Mourne foothills?  How about then climbing Donard?  The bewildered Sunday daytrippers must not have known what was going on – with them just out for a little walk in the nice weather.  Well armed with some rice krispie buns for a sugar injection to reach the top – one Dub took on a mountainous challenge on Sunday:

Stunning running Steven, in rough underfoot conditions and foggy and atrociously windy conditions at the top of the mountain!  After speaking to himself, in his own words he was “fairly beat on the final climb” and who could blame him during a 20 mile race!  With his new Dub top broken in, I hope he made the most of his Monday off.  It looked like you had fun anyway: 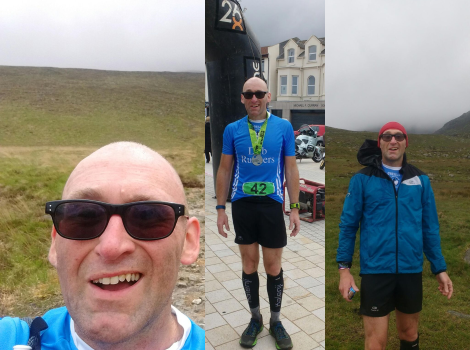 parkrun
If Waterworks flashmob wasn’t for you (and why not?!) then there are always the options every other parkrun event going to attend!  A few other Dubs also took part in the runs (they’re not races) on Saturday morning – braving the ever changing elements in the local parks:

Nice running folks, it is always good to get out there and push yourself at the weekend.  Fantastic to see some impressive times being posted.  No individual mentions this week – so hat tips to everyone for running!

Warmdown
That’s all folks for this week – as usual, please try and send us on some photos of the events or races you’re running in – we’ll even publish selfies!  I am a very proud nephew today, my uncle has just taken up a job working for a bike company – he’s their spokesman.

Disclaimer: Every effort was taken to ensure the results above are correct (my head is still in race 6 from Saturday night!!). If you’d like to make a complaint, then you’ll automatically volunteer yourself for writing duties next week 🙂