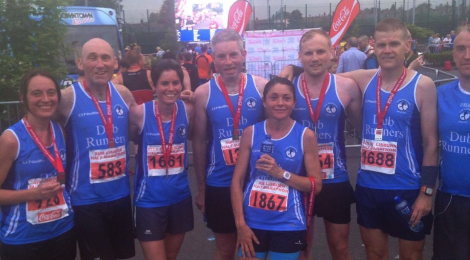 Cycling, swimming, 5k’s 5 miles, 10k’s and let’s not forget parkrun over the jump!

Warmup
Hello there! Another busy yet great week for the club, with lots of accomplishments to celebrate and shout about – and oh man, you’ve all been busy this week. Well, so have I as over the weekend I went to Belfast Zoo and saw a slice of toast lying in one of the enclosures – it was bread in captivity. Now then: make sure your eyes are okay, you have some water, take a deep breath and let’s begin!

Lisburn Half Marathon & 10k
So, if you are ever planning a BBQ for the summer – just check up what date the Lisburn Half Marathon is on and you’re guaranteed good weather. So, no change then in the usual weather conditions this year, as over 6,000 athletes descended on the city for its annual race series. The normal, reasonably hilly course was its usual stuffy self as an Errigle of Dubs took to the roads:

Fantastic to see so many Dubs making the difficult journey down the M1 for the early evening race. Some amazing times posted by everyone, and every single one of you pushing for the finish. If you check the results, that mid-group who ran 1:43 to 1:45 all seemed to cross the half way mark together – it must have seemed like an invasion of the Dubs at one point! Great running – we all hope you took the chance to relax afterwards – it’s not like the next day was a working day or anything..!!  There is a gallery, including some action shots, online right now, and here is a sample: 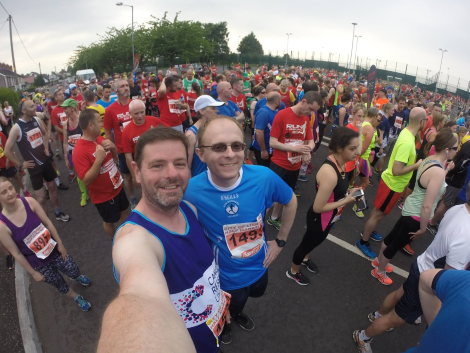 Lis(sun)burn: Gerard & Aaron – Us Dubs like to stand out in a crowd!

Hill and Dales, Race 11: Drinnahilly
Race number 11, the final event and what a way to celebrate – with a big party. The last one, which the organisers called a “fun, short route” took victims up a slight incline (yeah, right) to the mast, before bolting back towards the finish – I’m reliably informed the peak this time was called Drinahilly. In ideal, fresh evening conditions, we had three Dubs complete in the final installment:

Fantastic running folks – really great running, and not just at that race but over the course of the race series. It’s worth noting that Jimbo ran eight of the races and Bernie completed six, with Steven taking part in ‘just’ three – Jimbo and Bernie completed the magic number of six races to earn themselves an exclusive Hill and Dales gilet! As the Dub Supporting Club followed them to Newcastle, we have a wee gallery of shots from the night, including this one: 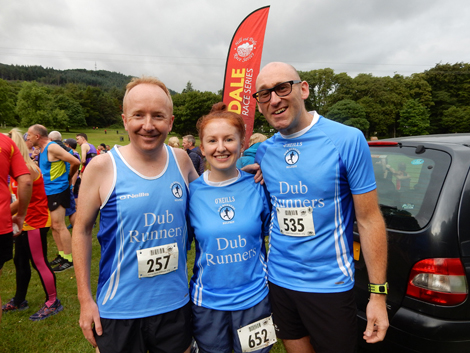 Kilyleagh 5 Mile Road Race
(It’s near Downpatrick, I’ll save you the Google search) hosted a smaller five mile racing event. The looped route, in the beautiful countryside of County Down, held their event in conditions that looked to be getting worse – but it was able to hold together for the race. Just the one Dub at this one:

Great running MKS – nice and steady average time posted around the course. There’s very little information about this one online – not even a photo, which as we all know disappoints me! Still though, impressive running!

TQCC – Soltice Sportive
On Friday, June 23 2017, Titanic Quarter Cycling Club hosted its first sportive – the Solstice Sportive. More than 150 riders, including an Errigle of Dubs, took part in the 38-mile summer evening event. The route, exactly explained by Anna as “it went out around the country a bit”: out of Belfast, to Drumbo towards Carryduff, out to Saintfield, across to Ballygowan and Comber before finishing in our grounds! No results, yet I was still sent a photograph: 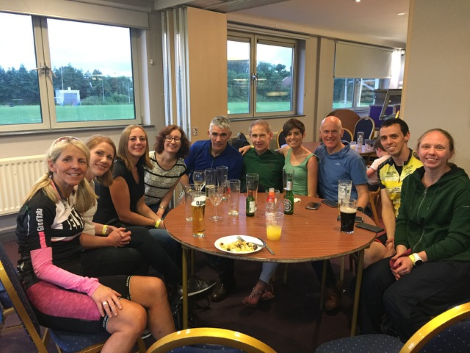 Tullylish 10k
A small field entered to raise funds for the Kevin Bell Repatriation Trust. Craftily, the organisers had found every hill in the area (that’s Craigavon) and linked them to create the course with nearly 500ft of climbing. It was the perfect course for one Dub and his ‘Babe Magnet‘:

Magic running Steven – certainly sounds like a race designed just for you, which probably explains how you finished second! I did hear that you were involved in a battle for the entire race with the third placed fella, luckily (for you and us), you eventually lost him in a sprint at the end! Nice going – let’s relive some of the race: 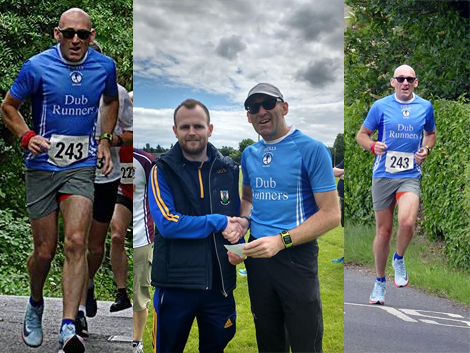 Peninsula Triathlon
Ever felt like just running wasn’t enough?! Ever felt like you’d love to do a swimming then cycle race before running a race? Yeah, either do I, but some Dubbers like to push themselves extra hard on a Sunday morning: 750 meter open water swim, 10k cycle followed by a 5k run. Who was up for that you ask?

Impressive, impressive times posted by you all – I’ll always be envious of anyone who can do races like this. Nice conditions on Sunday morning helped along the way. After all that you deserved your Sunday dinner, and the last thing you need is a visual reminder of the event. So, naturally, here’s some photos: 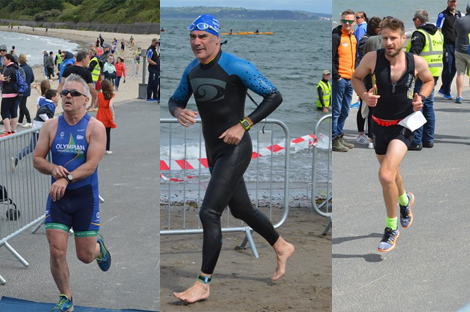 Hell 4 Leather 10k
Anyone know where Lough Beg is?! If you do, you know where this race was – if not, then it is at Moneyglass just beside Toome (the place with that big blue bridge). The course was mostly flat, with a small rise in the middle, meant that it was a course of great potential for the Dubber who took it on:

Nice running James – not only a fantastic time, but also a PB in the bag as well. It looked like a great, quiet course (as we can see below) where you could go hell for leather!! You know what is needed after that – a session in the pub followed by a flipping great ice cream – that’d be the perfect way to finish that race!! 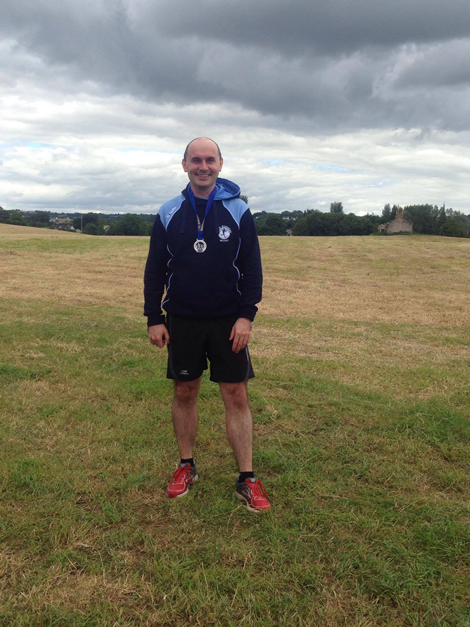 parkrun
Last but not least, we end the roundup each week with our beloved parkrun. Lots of different courses getting a run this week – all over the country too. It’s always cool to know that we’re all doing these events at the same time wherever we are – helps to us you around when you’re not feeling a route! Let’s take a look at how everyone got on:

Fantastic ruining everyone – great so to see so many of the club taking park on a dull and wet Saturday morning. Hat tips this week go to James D who was not only first over the line at the Derry City event but also set a course PB too! Let’s not forget our Kathy too, who took the second step of the podium in Sligo. Apart from that, newbie course PBs were set this week by Louise (at Victoria), Ronan (at City Park) and Mike S (at Preston Park).  It was so nice in Craigavon, I even decided that parkrun needed a photo this week: 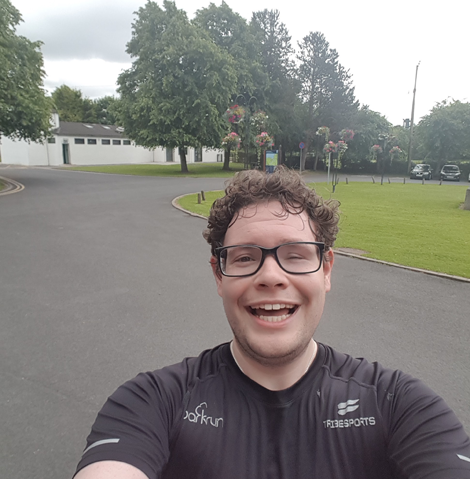 T’is a grand day for a parkrun selfie!

Warmdown
We made it – well done you for getting this far. Please, please, please remember it is much easier to find you on the results if you list your club as Dub Runners – as good as I like to think I am, there’s no way I was going through 6,000+ entrants of the Lisburn Half to find one name!! We had a nice family game of Scrabble the other evening, that was until we started throwing the tiles at each – I’ll tell you it’s all fun and games until someone loses an i.

Disclaimer: Every effort was taken to ensure the results above are correct (read it, then try and tell me you’d not miss something!!). If you’d like to make a complaint, then you’ll automatically volunteer yourself for writing duties next week 🙂