From parkrun, to 10k, to 10 miles right up to a half marathon this week – all over the jump!

Warmup
Big week ahead for the club – Giant’s Trail Race this coming Friday, so I bet you’re all hoping for a downpour early on Friday evening! Thinking ahead, just in case it rains on Friday – I have an ark ready for us – it’s okay, I Noah guy! First up this week, some news…

Giant’s Trail Race – Warmup
Sil and Dale were out on Saturday where he completed his first 10k ion some time! The two lads walked the route – and loved it. I’ve been told that they walked the course in just 2 hours and 40 minutes – with Dale telling Zak to watch his back for 2018! 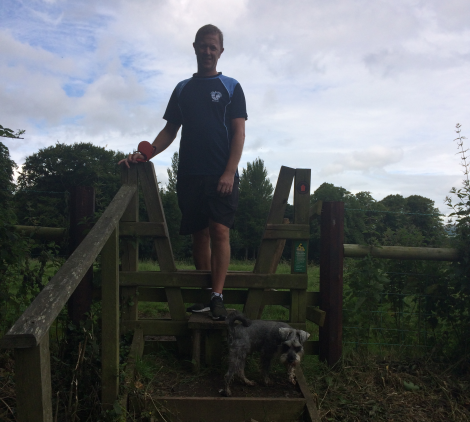 Portaferry 10 Mile Road Race
We all know how hard it is it go to training on a Tuesday evening when the weather is good. Imagine just how hard it was to just pluck up the courage to travel to Portaferry for their annual 10 mile road race last week!! With a smaller rise 3 miles in and a pretty continuous hill from half way until the finish, it isn’t the easiest way to spend an evening. Luckily, we had an Errigle of Dubs willing to take part:

Fantastic performance from the club in Downpatrick area (that’s what I am told anyway)! With the heat of the evening adding to the challenge of the course, this isn’t one for the faint of heart! Seen as quite a few of the runners from Tuesday made it to the Flashmob parkrun on Saturday morning – it seems like a few days recovery was required in between. Here’s a selection of photos from the evening: 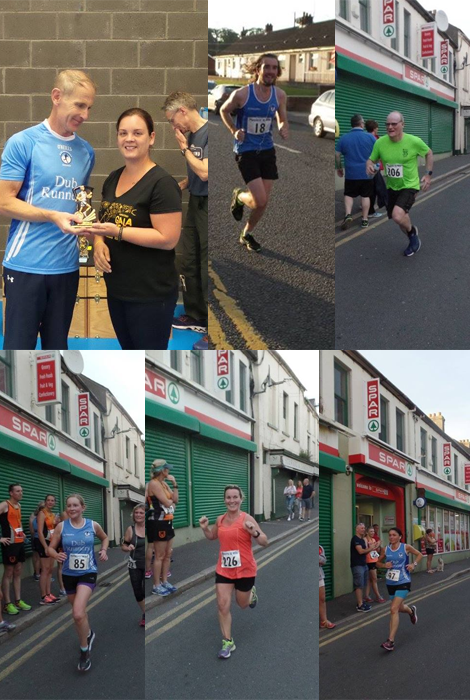 Portaferry: The Dubs make an impression at the 10 miler!

Flashmob parkrun: Victoria
I think this is a parkrun course that nearly all of the club know. Victoria Park, just beside the City Airport, hosting a slightly altered course of three loops of the outside track. So three, almost flat loops around the course – in an attempt to score as many points as we can towards our Wava League standings. Typically, we had an Errigle of Dubs taking part:

Magic running everyone, I know running, what was for us, a 5k race so early in the morning is never an easy task – so well done everyone! We have some of our usual hat tips to give this week, and it is all new course PBs this time for Steven, James D, Collette, Heather and Suzy. No bonus points for setting new PBs (thankfully in my case) – but James will supply a Wava Update in due course!  Naturally, it wouldn’t be a flashmob without a gropup photo: 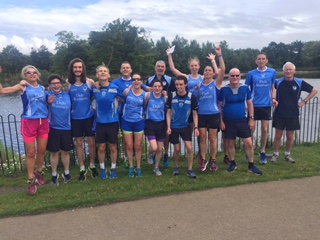 Victoria flashmob: ALl the Dubs at Victoria park!

Dark Hedges Half Marathon
Round seven of the Pure Running Half Marathon Series was held in Dervock on Saturday morning. A name change to reflect the Game of Thrones tourist attraction doesn’t cover up just how tough the course is. Set in the scenic countryside of Ballymena, the course is described as “lots of hills, with little reprieve in the downhill sections”. Despite that – four Dubs still took part:

Nice running everyone, on a tough course and very warm conditions. It was around 15-16 degrees out on the mid-morning course. Impressive times posted by the four Dubs – and plenty of time to relax and enjoy the rest of the weekend! After a race I usually look beat up, not like these fresh and photographic runners: 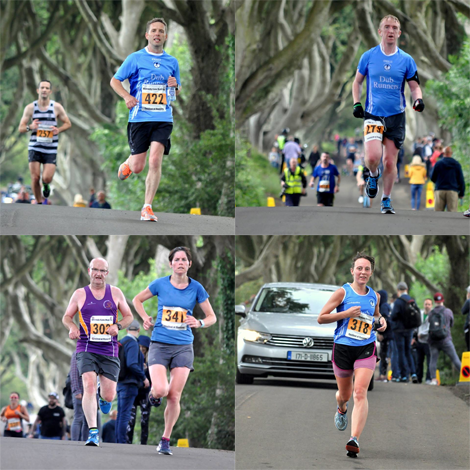 Big Splash Triathlon
Sean travelled to in the Portglenone County of Antrim to take on the Big Splash Triathlon. The course was a 750 meter swim down a river (which had to be changed due to strong flow), a 20km cycle followed by a 5k race. Sure what else would you be doing on a Saturday morning?!

Great going Sean – 110% effort applied in a race that “took everything out” of him. Not the best conditions ever for a race, which made it trickier than it should have been! Of course, the most frustrating part for Sean was missing out on Uncle Hugo’s outside broadcast from the event on Friday afternoon!

Fingal 10k
Swords north of Dublin hosted the SSE Fingal 10k early on Sunday morning – sure what else would you want to be doing at that hour of a Sunday! With an elevation change of around 100ft, it would prove to be a challenging by rewarding circuits for the entrants. Luckily, we had one Dub taking part (along with his other family):

What a really fantastic time posted by Neil as he continues his journey to the Dublin Marathon. Expect to see him popping up in a few more races before October! Neil tells me that he found the course “actually quite enjoyable” – and we all believe him were millions wouldn’t! One plus side though, we did get a photo of Neil with his other ‘Dream Team’ family: 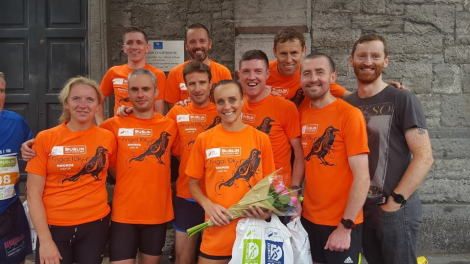 Dream Team: Neil and the gang take on the Fingal 10k!

parkrun
It might be the summer, but that won’t stop us from getting on with our favourite Saturday morning past time. On a lovely bright Saturday morning, at about 9:20am the parks come alive with runners ready to take on whatever course the park throws up at them.

Numbers slightly down because of the huge numbers over at Victoria Park, but that doesn’t change the effort put in by everyone!  Some hat tips this week, and first home (at a brand new course) was Niall in Rostrevor.  Then we had two second females across the line Aine (at Rostrevor) and Karen (at Kilarney).  Last but not least, a newbie course PB was set by Mike while off on his holidays in Stonehaven.  Finishing second is any race is a great rush, but to have your kids there cheering you on is just special: 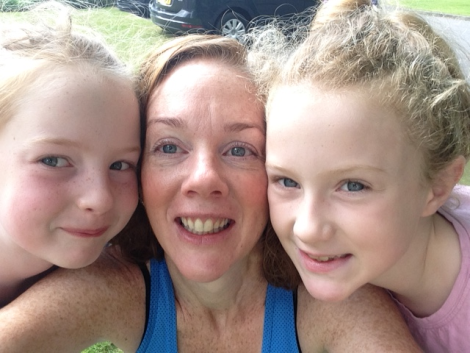 Second Home: All smiles after Kilarney!

Warmdown
That’s us for another week – big kudos to everyone who sent me little snippets for this week’s edition. In the midst of all the trail race promotion it was hard to stay on top of things this week! I did find some time to head to the zoo at the weekend, and witnessed a kidnapping – I decided not to wake it for a better photo!

Disclaimer: Every effort was taken to ensure the results above are correct (I was too busy doing PR stuff this week!!). If you’d like to make a complaint, then you’ll automatically volunteer yourself for writing duties next week 🙂