We have three 10k’s, ten miles, half marathon distance and let’s not forget parkrun over the jump!

Warmup
That was a bit of a week wasn’t it?! Thanks to all the Dubbers who helped stage the Giant’s Trail Race on Friday evening – you should all give yourselves a pat on the back for a job well done. Despite our own race, we were hard at it ourselves racing around the place – but more on that in a moment. I was doing my shopping over the weekend, and walked past the “Head and Shoulders” shampoo in one isle. I thought to myself = surely they’ve missed a trick by not releasing a bodywash called “Knees and Toes”? So the roundup, yeah…

Crossgar 10k
We head back this week to Crossgar for a tough 10k race over very hilly ground. The looped route beginning and ending in Crossgar attracted a large crowd on Saturday mid-morning, with near perfect running conditions. Luckily, we had two Dubbers taking to the start line:

You might have been in County Down, but those times are looking up. Great running by the two of you – and let’s not forget this was the morning after the race too. So despite the fatigue – nice going guys. Alex managed to avoid the camera, but Jim was on hand: 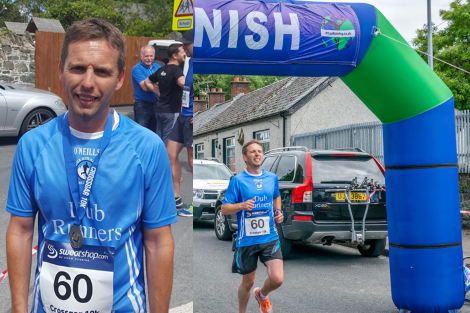 Happy-gar: Jim Looking Strong as he Crosses the Line!

Blayney Rockets 10 Mile Race
The surrounds of Castleblayney hosted the fourth running of the Rockets 10 mile road race. Promoted as an event for runners of all abilities, the mostly flat route mixed with a few short hills to spice things up a little bit. So, it’s a long distance run in the middle of nowhere, guess who took part?!

Great running Louise – an impressive time over the distance too. The favourable weather conditions helped on Saturday morning, and the hospitality after the race was pretty darn good – made for an enjoyable race. As we can see from the photo below: 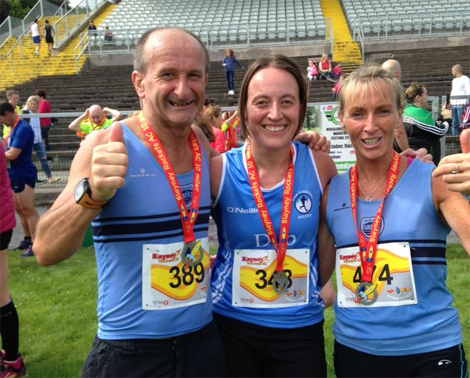 She’s a Rocket: Louise and her Chums at Castleblayney!

Cookstown Half Marathon
We’re getting to the business end of the half marathon series of races as we move on to Cookstown. While it is a small town, the undulating route takes runners out into the picturesque countryside of County Tyrone before looping back into town. We had two Dubbers taking to the road:

Fantastic running folks – while it is a beautiful course, from memory, there can be some limited support along the route which makes it more of a challenge. Two runners, and both in under one hour fifty minutes. We’ve no photos of Ducky from the race, but Louise was able to send us a photo: 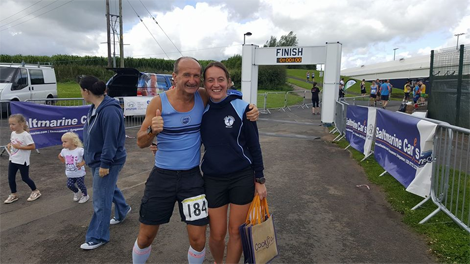 Hungry for Success: Louise Completing her Two in Two Days!

Divis 10k
Ever wake up on a Sunday and decide to run up the side of Divis? Somehow this was the thought process of one Dub this week, to join the other six brave Dubs who’d pre-registered for the race. Up to Divis, down a little and across and a little uphill again to Blacks Mountain before returning to base. With an appearance of the new Babe Magnet parked by the start line, seven Dubs took part:

This race, you can summit up in one word: tough. I counted two brief but heavy showers in the mini ecosystem of Divis Mountain. With mighty impressive times posted by everyone, we must give special mention to the Pocket Rocket Bernie who was the first female in the race, while our very own Sneaky Dave Steven won his age category! An impressive haul for a Sunday morning I think you’d agree. Of course, there was an obligatory photo taken at the finish: 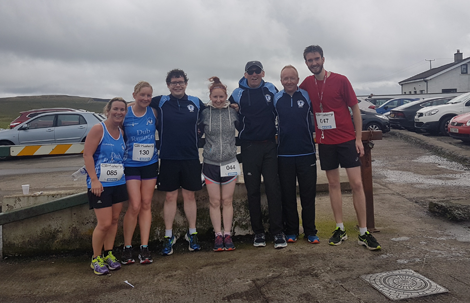 Broughshane 10k
First day of a new working week, you’re considering a new job, tired, already planning for next weekend – so why not go for a 10k race?! The Ballymena village hosted an almost looped 10k route with its half way point approaching the M2 ring road. It was a reasonable route, with an added challenge of three mini hills to tackle within the last mile and a half. Two Dubs put on the wet weather gear:

Nice running Louse and James, great times considering the last thing most of us would want to do on a Monday is race (let along do a 10k race). With the torrential downpours of the early evening mixed with some muggy conditions it was a “tough, tough wee race” that couldn’t quite deliver on its PB promise from the promotion! Stroll, they both did it, and they look extremely happy top be finished: 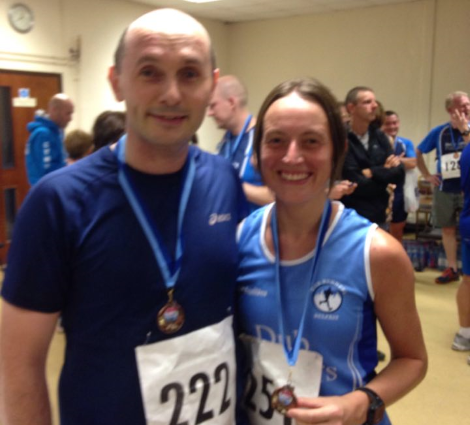 parkrun
The morning after the Giant’s Trail Race usually produces a few sore heads. These arise normally from the excessive cheering and wooting at the competitors from the night before – and no other reason. So despite the early start, the Dub Runners are troopers and made it out bright and early:

Nice – great to see so many of the club getting up early after the hard work of the GTR the night before. Woah, where to start with the hat tips this week?! First up, taking the top step of the podium was Claire at her first outing at the Queen’s event! We also had two second place finishes for Bernie and James at the Queen’s and Stormont events. Then third home at the Falls event was our very own Alistair. Some new course PBs set by Alison (at Victoria) and James (at Stormont). Finally, some newbie course benchmarks set by Bernie (at Queen’s), Alistair (at Falls), Ronan (at Larne) and Suzy (at Stormont).  What’s that I hear you shout – you want a picture?! 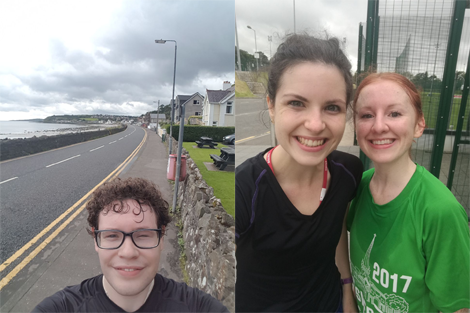 Sham to Glam: Ronan at Larne, then Claire and Bernie at Queen’s!

Warmdown
Thanks everyone for your help with the roundup this week, sending me photos on Facebook and WhatsApp – who says traditional forms of contact like e-mail are dying out?! Make sure to let me know of any races you’re taking part in please – especially over the next few weeks of holidays and other ‘normal life events’!! After all that happened this week, I decided to chill off by heading to the cinema. Of course, I managed to get myself thrown out for bringing in “outside food”. I hate those rules – and I was really looking forward to that BBQ too.

Disclaimer: Every effort was taken to ensure the results above are correct (just try complaining after Friday evening!!). If you’d like to make a complaint, then you’ll automatically volunteer yourself for writing duties next week 🙂