So we ran a few mountains this week and set some new PBs – all the gossip over the jump!

Warmup
If a song could sum up the roundup, then there’s no doubt that this covers it! It has been one hell of a busy week for the Dub and we’ve entered a lot of races – so try to keep up! Not sure if you know, but I race snails as a hobby. I took the shell off my snail to try and increase aerodynamics, but now he is a little sluggish. Right then, deep breath, let’s go:

Mallusk Harriers 5 Mile Race
If a race could set a theme for roundup, then this local race sums it up in one. With peaks at 1.5, 2.5 and 3.5 miles – the only reward was the gentle sloping downhill of 1.5 miles to the finish line. Read to kick the weekend in the a… butt we had four Dubs step up to the mark:

Some super speedy running folks in some lovely conditions on Friday evening. I don’t know about the rest of you, but I just like to relax on the sofa on a Friday after work – not tackle a mountain. Fair play, impressive times and despite everything – still time for smiles and laughs after the race: 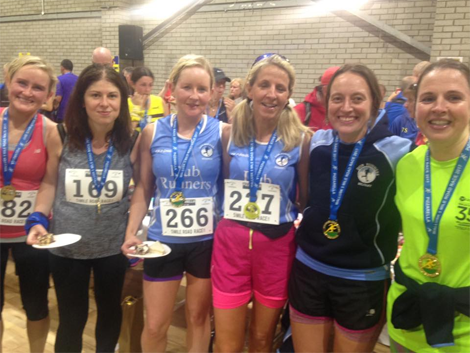 Rock and Roll 5k Dublin
Kicking off a weekend of ‘Rock and Roll’ branded running, first off, a trip to Dublin Zoo – almost! Phoenix Park hosted the mostly flat route – with a gentle downhill followed b y a fairly quick uphill at just about the half way distance. We had one Dub warming up before taking on a slightly longer distance the next day:

So, to explain, Elizabeth is Jim’s wife! Jim kindly offered to pace her around and earn Elizabeth her 5k PB in the process! Great running folks, those are very busy races and tough to get into a rhythm – so great going. Plus, imagine how much faster you could have gone without Jim holding you back! Always nice to see some smiles after a race too: 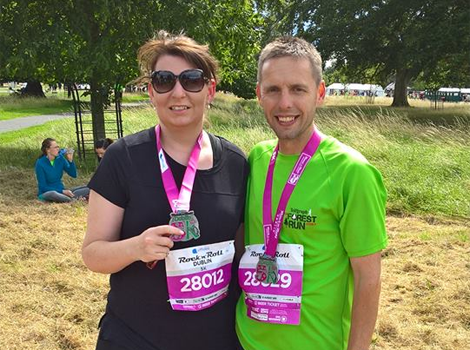 It Takes Two: Elizabeth & Jim all smiles in Dublin!

Hi-Elbow Lough Neagh Triathlon
A perfect day in the little village of Ballyronan for a triathlon. A deep water 750m swim round the buoys and back to the beach to collect some bikes. Followed by 20km of two fast laps with a long fast straight back to transition. A final 5k run of two laps starting in the marina, through the forest trail out in the road and back to the marina. Two Dubs made the voyage:

What a bunch of legends – always have to check the results just in case they’ve sneaked in a little tri over the weekend! Perfect conditions over the summer months can only mean one thing – it was also very warm too, so fantastic achievement in the multi-discipline race. The two lads clearly thought that the roundup wasn’t going to be long enough this week, and even had a little chuckle about it: 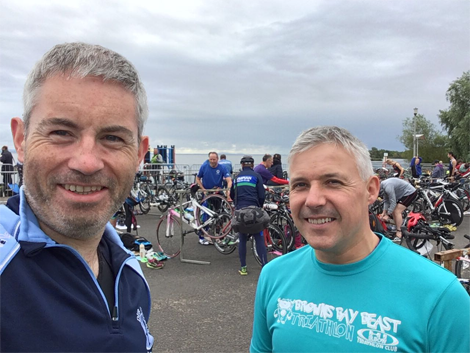 Likely Lads: Tri-ing to fly the flag for the Dubs!

Groomsport Half Marathon
If you keep driving on through Bangor you’ll eventually end up in Groomsport. Basically, there’s one main street, which is where it all kicks off. This is followed by a loop around and over the hill back towards the coastline. At this point 10k’ers can cut off back to the finish, but halfers need to go for a second loop. We had one Dubber quacker enough to take part:

That is a great time Ducky, you’re fairly putting the miles under your belt with all these full and half marathons. Since moving to its now traditional Saturday morning slot, the race has become as popular as ever. Oh, Richard you managed to escape the cameras… for now!! 🙂

Slieve Croob Challenge
With an elevation change of over 1100ft, Dromara was descended upon on Saturday morning for a small race. The route was 5k up to the peak of Slieve Croob – and then machine is down for the final 5k. Literally an out and back in course – made for tricky footings. That didn’t stop one Dub (and her sister) taking on the route:

Fantastic running Anna – and third spot on the podium – mighty! I know that you had a busy weekend, with other “social activities” on your calendar, and it was a bit of a last minute decision with your sister to take part in the race. Of course, no matter how late you register, there’s always time for a quick selfie: 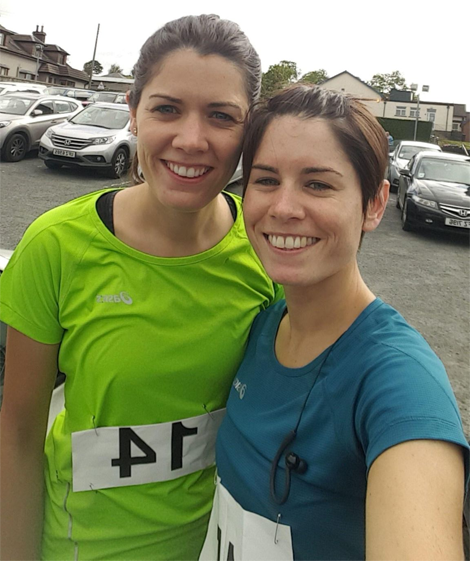 Slieve Croob: All smiles before the race!!

Lurig Challenge
Cushendall set the location for a 3.8 mile run up and down the 375m climb of Lurig. Our fearless leader was very modest, describing the race as having “not much running” on the way up, followed by “sliding on me a**e” on the way back down again. Despite the description, there were perfect conditions and a great atmosphere:

Fantastic running Brian – and kicking off the club’s Saturday or mountain race running in some style. A real tough challenge this one, and a race of firsts too with Brian “suffering from a wedie” mid race! A little too much of a vivid image painted there. Thankfully, there are no photos from the race to show you all!

Seven Sevens
Let’s do the hands up: hands up if you’d like to take on a 19 mile race with a mere climb of 8700 feet – all timeboxed within one day? Just the one volunteer then! The challenge is to race to the peaks of seven mountains in the Mournes: Donard, Commedagh, Bearnagh, Meelmore, Meelbeg, Binnian and Lamigan – in this order too. Setting off with a map, supplies and no pressure was our very own Bernadette O’Kane:

For those who think that running it might be a little too much, there is also the walking challenge, which Marty Teggart took on:

I still find it hard to get my head around this race / challenge / madness. Some fantastic running Bernie – flying the flag for the Dub Runners at one of the most challenging routes.  Not to mention Marty taking on the walk!  I don’t think many of us can imagine running (or walking) for that long, over that terrain – take a few days to rest after that one! Now, truth be told, our Jim was there too, but said he doesn’t want a mention as he “only” ran six of the seven peaks – and was left holding the flag while Bernie completed Lamigan. Still, six out of seven is quite the achievement!  We did have a camera man on the scene, and he sent us this: 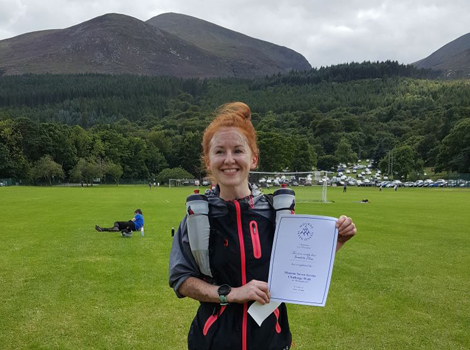 Féile 10k
This annual race was held in perfect weather, blue skies, sun shinning and there was even a friendly crowd to help everyone along. The course was flat and somehow avoided the hilly bits of West Belfast! Then a straight road all the way to the finish line just past Finaghy (in some park). There was a good representation of Dubs:

What a morning for a race – top ten finish for Steven and a new PB for Heather too (that’s two in one weekend!) Great running all round by the Dubs taking part on what was a very, very warm Sunday morning. Of course, where there is a group of Dubs present, the rule is that there must also be a photo: 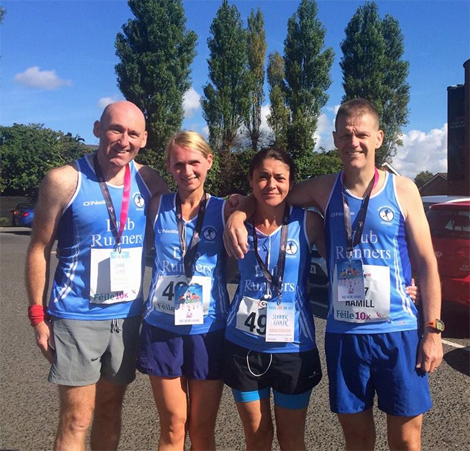 Rock and Roll Half Marathon Dublin
Not content with just doing the 5k – Jim set his sights on the longer 13.1 mile course. Beginning in the financial district and cutting through the heart of Dublin City centre, basically following the River Liffey. That is before the final five miles around the scenic grounds of Phoenix Park towards the finish. Not an easy race (is it ever?!), but there was an extra Dub along for the ride too, so let’s see how they got on:

Those are great times Jim and Paul, really powerful running – and that’s despite Jim being out with us on Divis on Thursday evening (obviously you can thank us for your extraordinary time). Let’s not forget that you also set your own all time half marathon PB as well. Not bad at all for a morning’s work Dubbers!  Now, all we need are some post-race photos:

parkrun
Right, did someone send out a memo that we had to run a parkrun this weekend?! I mean, there’s no better way to start the weekend, I’m very vocal about that, but I count some 22 Dubbers getting out into your local (and some not-so-local) parks first thing Saturday. Let’s take a look at how we got on:

Just a few hat tips to report this week (thankfully, my hands can’t take much more typing!) We had some awesome new course PBs set by Heather (at Victoria), Anne (at Victoria) and Judas himself, James D (at Ormeau). Finally, two newbies testing out some new courses was Ronan (at Antrim) and Mike (at Bevendean Down). As have now become tradition from Ronan on his travels: 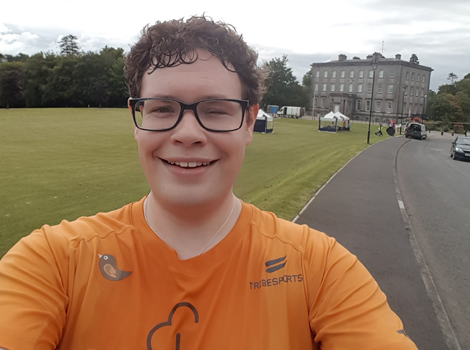 Warmdown
You made it – give yourself a pat on the back for getting here. Or maybe you skipped most of it and landed down here – go back and finish reading it please! If I missed a result or race or something, seriously this took four hours to write up this week! I went to a party over the weekend and there was a dog magician there doing tricks – it was a labracadabrador!

Disclaimer: Every effort was taken to ensure the results above are correct (four hours, four hours!!!). If you’d like to make a complaint, then you’ll automatically volunteer yourself for writing duties next week 🙂