parkrun to 5k to 4 (yes, four!!) half marathons and more over the jump!

Warmup
There may be some 840 miles and a timezone separating me from the action this week, but in today’s technological age, why let a thing like that stop the roundup rolling. We have all the latest gossip and action from the club this week, but let me tell you a story… The missus told me that I couldn’t, but I made a bike out of spaghetti – you should of seen her face when I rode straight pasta. Right then, the results:

North Down Meeting – 3000m
On Tuesday, skipping training (it was noted, don’t worry), North Down AC held their latest open track meeting in Bangor. On the track, and in more than idea conditions one Dub took off for seven and a half hard laps of the track:

Stunning running from James there and taking the final spot on the podium (from one of the race hosts too!!) A mighty impressive time, though James tells me that he went out too hard and lost it a bit in the middle – but we’re still proud of you, don’t worry about that ?! Now, where are the pictures?!

Philip Patton Memorial 10k
If you were at a loose end on Friday evening and didn’t fancy an evening in front of the Tele stuffing your face with food (I couldn’t blame you for that), then you could have needed to Bessbrook for a wee 10k race!

Bloody great running Niall, an impressive finish, less of a win and more of an annihilation to the 42 minute finish of the guy behind you! Great running, impressive time-consuming but where’s the photo Niall?!

Flashmob parkrun: Bangor
Hopefully not leaving anyone too disappointed our August flashmob parkrun was moved at the last minute to accommodate September’s new entry to the family. The challenging cross-course takes County Down’s scenic Ward Park, and the reward is the awesome spread ot on for everyone after the event! This is a popular parkrun – made even more so by the Errigle of Dubs who descended on Saturday morning:

Nice – great to see a (small) Errigle of Dubs make the short journey out the A2. Some nice and impressive times posted – we had a new course PB set by our Roisin! Of course we can’t forget the newbie PBs set by Steven, Andrew N, Mark, Brian D and Jane. This is why were doing the flashmobs, to experience courses – and look at the smiles on their faces: 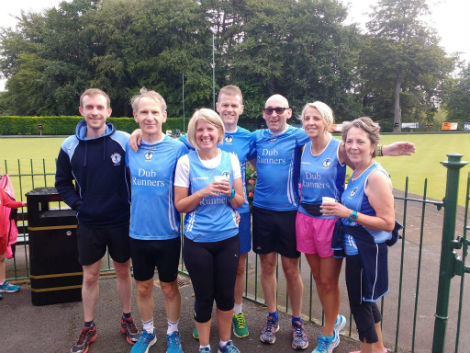 Bang-on: The stars of the Bangor flashmob!

Dambusters Half Marathon
An old club favourite, slightly down on numbers from the usual. This hilly and challenging course taking in Silent Valley is not for the front of heart, with it’s tough final 3 miles over the mountain! Just the one Dub this year:

Great going Maura, that is one tricky course and usually quite busy too for that extra kick!  Great time posted, so an opportunity to go home, head held high and do nothing for the rest of the weekend (but we all know you wouldn’t do that!!).  No photos, bu you where a bit rushed so we can let you off – this once!!

Connswater 10k
It is a warm welcome to Belfast City’s newest race – the Connswater 10k and 5k races. The focus moved to East Belfast with the route takeing in the local sights of CS Lewis Square, Victoria Park, Connswater Greenway, Sam Thomspon Bridge, Comber Greenway and the Harbour Estate. One loop for the 5k’ers, two for the 10k contingent – all finishing at the iconic CS Lewis Square. We had a gathering of Dubs taking part:

Great going by the trio in the first running of this wonderful event – really great folks! While a flat course – it took in the dreaded airport road – which fans of the Belfast marathon route will be too familiar with.  All in all, a stunjng day’s work for the Dubs, who even posed for a little photo op: 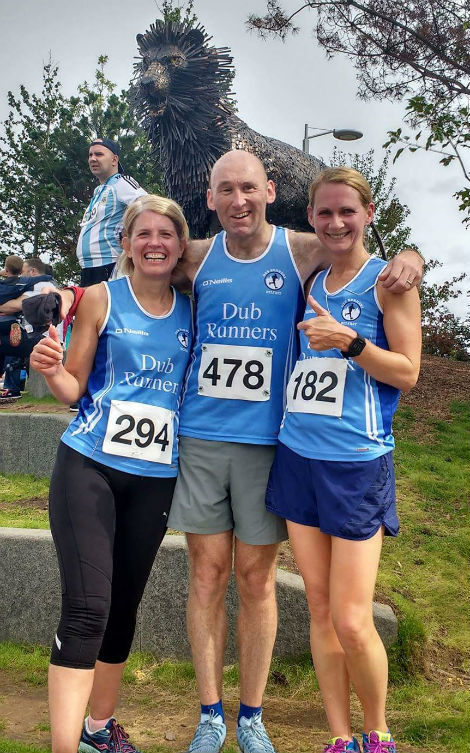 No Cons: Kathy, Steven and Anne give the new route the thumbs up!

Southern Area Hospice 10k
A late entry into the roundup this week, with Newry hosting a charity 10k race. The route is a dreaded one, for anyone who’s ran the old Newry half marathon course – fast and flat out the main road to Warrenpoint and back again.  This sounds like a job for one man:

Making it two from two this weekend – Niall bulldozed his way to his second bit of silverware this weekend.  With a stonking time and making it really easy – magic work! After my complaints about no photos on Friday evening, he didn’t disappoint on Sunday: 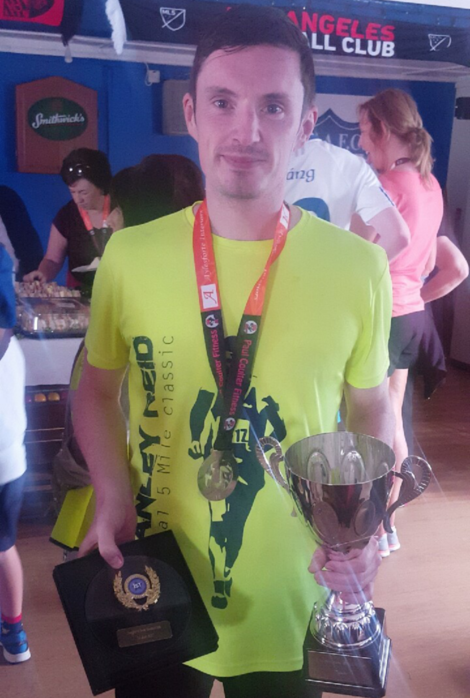 Number 1: Niall lifts the silverware at the tough charity event!

Quadrathon Challenge
Last year, two legends of the club introduced us to the Quadrathon. This year, two more stepped up to the mark to take on some of Donegal’s most challenging routes. Four days, four 13.1 mile routes from Kinnego, up to Malin Head, across Mamore and finally Muff. This is not a race to be laughed at – I’ve tried! Last year, the guys took on the courses, this year – here come the girls:

Please take a bow ladies! Amazing running and fantastic times set in some of the most picturesque locations Donegal and Ireland has to offer.  Take the time now to rest up before coming back to training – besides you probably can’t move with the weight of that medal: 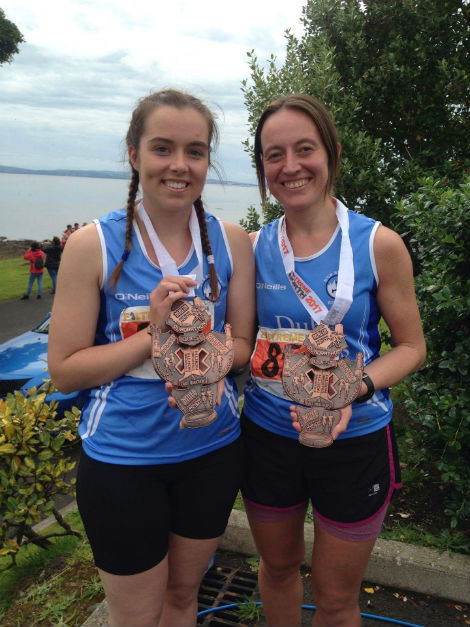 parkrun
Apparently, some Dubbers didn’t want to go to Bangor on Saturday – shocking in know! Well, weren’t they lucky that other parkrun events also took place up and down the country on this pleasant morning. I’ll be a good sport, and event mention them now:

Great running folks, that’s the way to start the weekend! Nice to see Jim finally make it out on the Queen’s course!! Just the one hat to tip this week, that is to Alastair who ran a new course PB at Queen’s – good job!

Finally – Dub Top Spotted!
Not being able to join in with the flashmob this week, didn’t stop Ronan creating his own 5k route along the River Gave de Pau – and there was a traditional selfie: 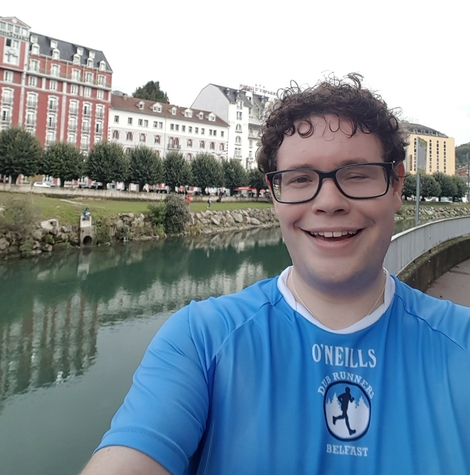 Warmdown
If you will allow me to tip my hat this week to my sneaky helpers: Aine, Kathy, James T & Steven. They’re all stars – thank you so much for your help. This quad, and I am sure more, worked tirelessly to bring me all the results and some information so that the roundup can still go out this week (broadcasting from France). Speaking of, before I left I opened some mustard to spread on my sandwich when I heard some singing – turns out it was just Celine Dijon.

Disclaimer: Every effort was taken to ensure the results above are correct (have you ever seen the Pyrenees?!). If you’d like to make a complaint, then you’ll automatically volunteer yourself for writing duties next week 🙂