We have parkrun, a Titanic 5k and 10k and a Great North Run all over the jump!

Warmup
Another week and another roundup. Another slightly smaller edition again this week. Big congratulations to all our club members who took part in the Causeway Coastal Sportive ion Saturday clocking a distance close to 120 miles on the bike – yikes! Before we get cracking with the results, don’t you love it when TV shows become self-aware? Well, I have to ask do you know when does a joke become a dad joke? It is when the punchline becomes apparent! Right-o, let’s take a look:

Wava League: Cavehill 5 Miler
Mr. T has asked me to remind you all that the next race in the club’s Wava League is the Cavehill 5 Miler which takes place on Sunday 24th September and entries are now open! This is the day after our next Flashmob parkrun in Castlewellan – so a perfect opportunity for a wee warmup before the race!

Citi Inspire 5k
The Titanic Quarter was going to be the key location for this week’s roundup. The first race in the area was the Inspire 5k taking in the docks area and a loop of the club favourite Victoria Park. The fast course appealed to just the one Dubber:

Magic running Paula, what an impressive time – and top step of the podium for you too! A great way to kick off the weekend celebrations. Great running despite having to dodge all the showers of the evening! As we all know Paula’s a bit camera shy (cough), so instead we got a photo of her medal: 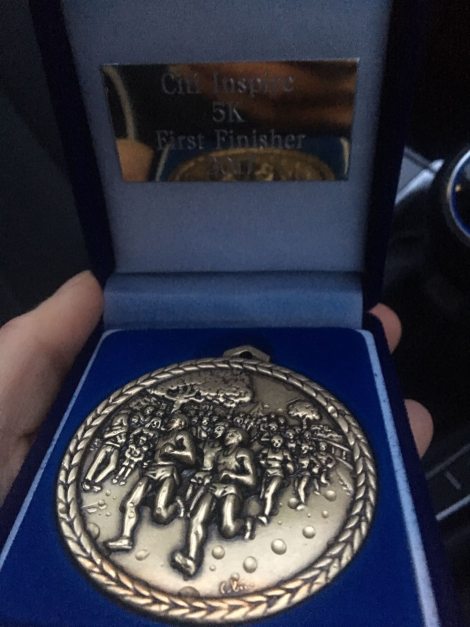 RunHer Titanic 10k
On a damp Sunday morning, the docks area of Belfast was descended upon by thousands of females for the RunHer event. The course, familiar to most of the club, is very similar to the Titanic Quarter 10k route – with all the trimmings. Two Dubs skipped their lunch to take part:

Cracking running from the two of you and impressive showings. Claire taking fifth place with Danielle coming well within the top 100 too – excellent representation for Dubs – doing us proud! We couldn’t get a photo of the two of them together, so instead, we used some imagery magic, and you could hardly tell that these are two separate images:

Great North Run
Newcastle and South Shields hosted their annual Great North Run in the most ideal running conditions on Sunday morning. We had one Dub take to the line along with 43,126 other people to soak up the atmosphere – and try and catch Mo Farrah:

Nice running Ronan – a great time in a great race. The crowds were unbelievable, especially during the final mile – which might explain the 8:50mins final mile along the coast. The goodie bag was impressive, still a little confused by the pasta though… Despite being on his own, there’s always time for a photo: 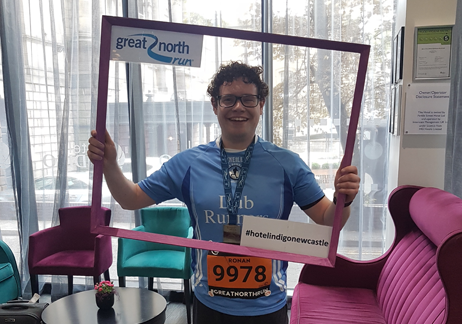 GNRonan: Happy and smiling after the race!

parkrun
Na, na, na, na, na – parkrun!! Devastated I didn’t get the opportunity to do a parkrun in Newcastle – my flights just didn’t work out 🙁 Great though to see so many of the Dubs out and about – including one at the first event Buncrana in Donegal. So let’s take a look at how we got on:

Simply magic running everyone – great to see everyone posting some amazing times on Saturday morning! Just the two hats to tip this week: taking the top step of the podium at the Enniskillen event was Richard taking the spoils. Then we had a newbie PB set by James S at the first ever Buncrana event in Donegal – on a tight and twisting course. Disappointed this week to break the run of photos accompanying the parkrun 🙁

Warmdown
That’s it! It is all over for another week, feel free to shop and relax for now! Special shout out to Claire, Danielle and Steven for their help this week in getting this out the door – I was a little busy as you could tell! Now, before you close this down, I want to ask you all a question – what do you call a man with no nose and no body? Nobody nose!

Disclaimer: Every effort was taken to ensure the results above are correct (why aye man!!). If you’d like to make a complaint, then you’ll automatically volunteer yourself for writing duties next week 🙂