Warmup
Well we turned the wick up a bit this week! As the year’s main road racing season begins to draw to a close, all the training plans are coming fruition before hibernation starts! Lot’s of results (and photos to get to, but first I want to tell you all about the dream I had over the weekend – with my right hand I was driving around a roundabout, with my left hand I was making pancakes – I was tossing and turning all night. Now them, where are the results?!

GOAT Triathlon
Ah, for some reason the name of this one still cracks me up! We’re in the Glens of Antrim for the now annual triathlon event (that’s where GOAT comes from). Could you do a 750m choppy swim? Followed by a “tough enough” (not my words) 21km cycle from Cushendall to Glenariff Forest Park and back again. Then for good measure a “very traily” 5k run with 100m change in elevation. We had two and a bit Dubs line up:

Nice going folks – impressive performances all round by everyone. Not the best morning for it either in Red Bay – with competitors happy to put on the wetsuits to get going! Great reviews of the evening coming in, and I am told that it was a really enjoyable and well run event that is recommended! Despite the conditions and the race, all three still found time to pose for a photo (champs): 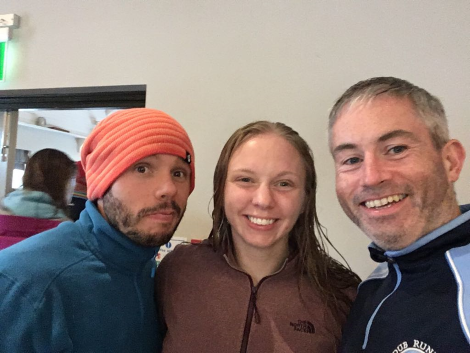 Time to GOAT: Paul, Suze & Sean fresh after the tri of races!

O’Brien Challenge 26k
Darvagh Forest, just a little North West of Cookstown (I didn’t know either) and the Sperrin Harriers hosted a 26k trail race (also called a challenge). This was more mountainous trail race that seems to go all over the joint – but the key thing you need to know is that there was over 1,500ft in elevation change. Sounds like a challenge for just one Dub:

Wow – amazing running Louise. Mighty impressive showing, in what can only be described as “pure rotten” weather. That was not an easy challenge, and the main thing to do after this was to rest up for a few days – not run a half marathon the next day… ah. Despite everything, there’s a photo and a smile: 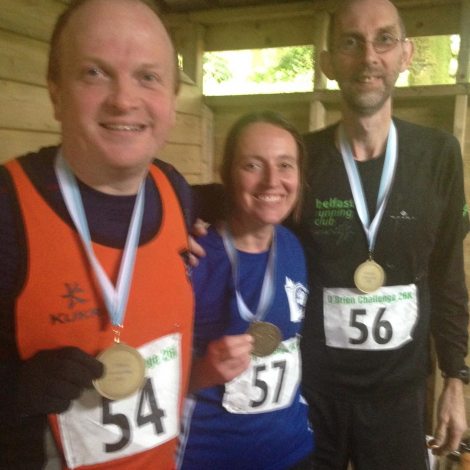 Worcester 10k
The West Midlands in England hosted their annual race weekend on Sunday – with half marathon and 10k events for everyone. Taking in the River Severn and in the heart of Worcester City centre, this is a scenic and enjoyable course with lots of supporters. We had one Dub take the chequered flag:

Great running Danielle – it is always nice to get away for a run somewhere different and experience a different atmosphere. From the looks of the photos online, it looked like a great day. Despite being away, we still get a smile and a photo: 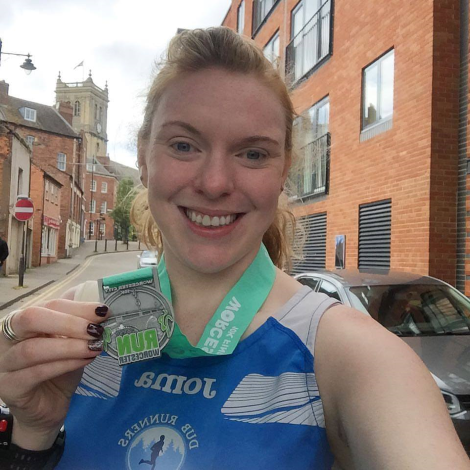 Worcester: Danielle all smailes after the 10k!

Belfast Half Marathon
3,500 runners on the ever more popular late-Summer event, meant a squashed and delayed start on the embankment. Once off, our crew set a pace around Sunday morning Belfast – familiar sights and sounds from our training runs, but much less enjoyable. Despite the previous day’s best efforts, the sun was shinning and looking good for the race. It is safe to say that an Errigle of Dubs took to the starting line:

Well – the Dubs absolutely smashed it! Mighty impressive times and paces – despite the crowds. The heat didn’t stop anyone with new PB times set by Jim S and Sneaky Dave himself – Steven T (that I’ve been told about)! There was also lots of fantastic Dubbers supporting along the route – always a welcome face along any route. We have quite a few photos sent to us, check out the full gallery, which includes this shot below: 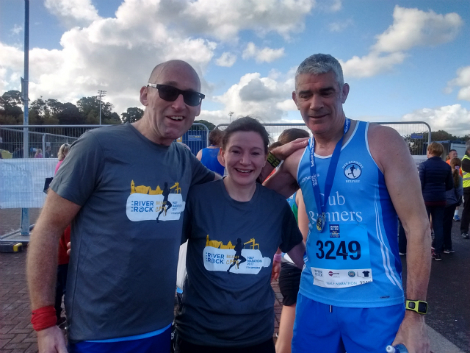 Bel-fast: Some a selection of our awesome runners!

parkrun
Saturday afternoon was miserable – almost reminded me of an auld Winter afternoon. Luckily though, parkrun is on Saturday morning’s – where it was markedly better for getting out early – with an incentive to get your exercise out of the way quickly. Clearly, we all checked the forecast as that is what we did:

That’s some nice running there everyone – quite a few stretching legs before the big event on the Sunday morning too! We got three hat tips this week, with second home at Falls being very own Steven! Then over at the Queen’s event, Amanda set a brand new course PB around the route! Finally, up in Donegal (look at a map), Ronan set a newbie PB at the second Buncrana event!  The weekly parkrun selfie makes an (un)welcome return this week: 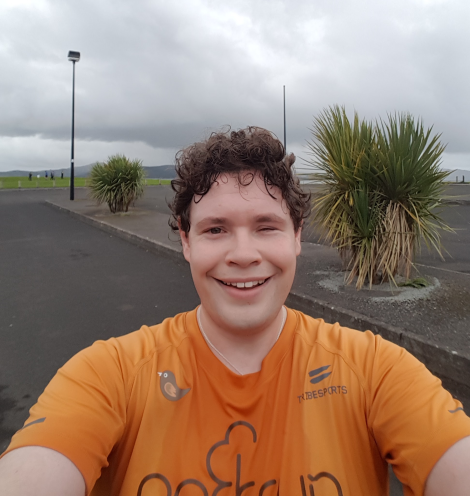 Warmdown
With that, we bring another edition of the roundup to a close. My thanks to Steven, Alison and Jim L for their help this week in getting everything ready when I wasn’t round – you’re all great! For those of you who were worried, I went to the doctor’s yesterday, walked in and said “I got a rash…” He said “Don’t worry, I’ll be quick!”

Disclaimer: Every effort was taken to ensure the results above are correct (I’m getting old, okay?!). If you’d like to make a complaint, then you’ll automatically volunteer yourself for writing duties next week 🙂