This week a childhood reminder, a 18 mile trek, a classic 10k and the usual parkrun – all over the jump!

Warmup
Good day interweb readers! Sometimes you approach a roundup thinking that it was a nice and quiet week for the club – then when you delve into the results a bit further the truth hits you in the face pretty quickly! That happened this week, but before we get to the results I’d like to share with you all, some advice that my father is always giving to me – “Don’t be quick to find faults!” What a great man he is – but a terrible geologist. Time for the results!

Annaghmore Festival of Running
If I told you that there was an 18 mile race organised. That this race went over some fairly hilly (read: mountainous) terrain. That it was also in the back of beyond between Portadown and Dungannon – and that there was only one Dub taking part – you’d all guess that Louise was running wouldn’t you? You’re all spot on:

The word challenge is thrown about a lot these days (mostly by me in this very roundup), but what a great race from our Louise! In near perfect running conditions, it was almost muggy being out on Saturday. An impressive time, on an impressive course – and most of all, very impressive that you were still smiling by the end: 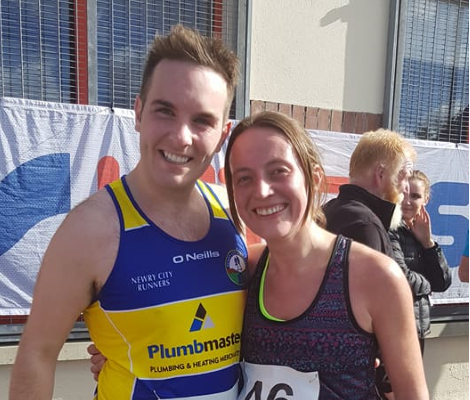 Annagh(no)more: 18 miles and smiling from Louise!

Bangor Classic 10k
This late September has because a favourite in the local running scene. The last race of the 10k series kicked off with a nice downhill out of Bangor, before moving inland for the mid-part of the race, with the turning point in Groomsport and back along the coast. With ideal conditions on the Saturday for running, we had quite a few Dubs make the trip:

A cracking morning of running form the Dubs out in Bangor – stunning times and ones to hold your heads high with for the rest of the weekend! The lovely, scenic route makes the race a firm favourite – even if there are some tricky bits along the way! Despite the numbers of Dubs, there was no group photo (why, why?!) but I did get this (hopefully) post-race photo from Alison: 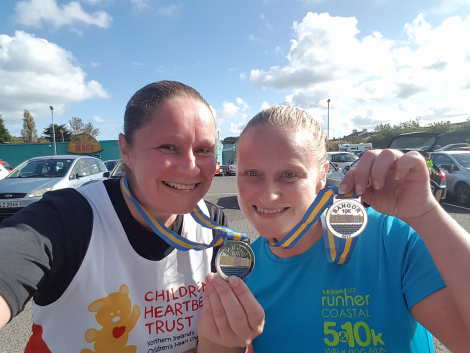 Bosco 10k
This is a new event in the heart of Newry City centre. Starting at the social centre and finishing at WIN Business Park, the mostly flat route on the towpath was an out and back in course, with lots of potential. With the rain holding off, we had a single Dub take to the starting line:

Top step of the podium Mr. Porter, a fantastic run- and you set a new course record all in the same morning! Those towpath runs (as we all know) can be tough mentally to keep going, so an impressive performance shown. The only photo Niall thinks I might have is of his dislocated finger (from Strava) when he fell after crossing the line – but I found another one:

Bosco 10k: The top (including our Niall) and the main man!

parkrun
With Tony Blackburn presenting the breakfast show on the radio – could there be any better way to start a weekend?! Well actually, yes! T’was a cracking Saturday morning, with the early morning sunshine just in your eyes (and I should know, I was driving into it). Lots of Dubbers pulled themselves of out bed for their weekly fix:

Nice running everyone – nice to see so many of the club represented at lots of different events. Let’s get hat tipping, Heather’s first up this week, with cool third place finish at the Victoria event! Plus, she set a new PB while she was there! Finally (literally), Ronan made it to the Enniskillen event to complete the set of now having run all 25 parkruns in Northern Ireland! To celebrate, here’s a selfie with castle: 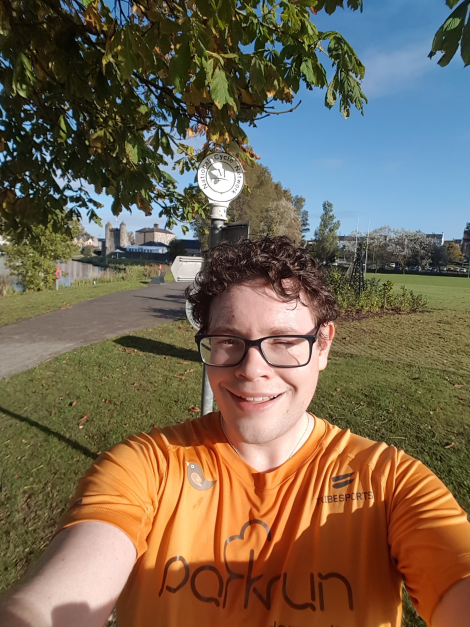 Warmdown
That’s us for another week at Roundup HQ – keep the races coming. Remember this is a celebration of all the ruining we do as a club, so always best ot get a smile on afterwards and send me on a photo or two for display (plus that means I get to write less)! Over the weekend, I had to take my DVD player back to the shop to complain it wasn’t working. “Disk inserted?” asked the assistant. I replied “Yes, I am”.

Disclaimer: Every effort was taken to ensure the results above are correct (I’m sleepy after driving for nearly two hours for a 25 minute run!!). If you’d like to make a complaint, then you’ll automatically volunteer yourself for writing duties next week 🙂