Warmup
Well, that’s been a bit of a windy one the last 24 hours – we hope you all stayed safe and a reminder that training is back in as normal this evening. The missus and myself went out for dinner on the Moon on Friday Eve, the food was okay – but there was no atmosphere. Let’s see what we’ve been up to:

Dundrum GR8
This one has become a Dub favourite over the last five years, always attracting a large number of Dubbers taking part. This multiterminal race tackles roads, trails of potholes and stones, wooden boardwalk and a near two mile stretch on the beach for good measure. On Saturday, early afternoon, in what can only be described as near ideal conditions an Errigle of Dubs set off on the 8.2 mile course:

Some special running there from all the Dubs – great to see so many of our recent recruits on the line too. With James T narrowly missing out on a podium spot, nine club members in under the hour mark and everyone over the line within 90 minutes – we can claim that as a successful Dub trip.   I know there were quite a few PBs and achievements unlocked on Saturday afternoon – franky far too many for me to make note of without insulting somebody for missing something!  A notable mention to the lovely warm showers most of us were able to get – sure it was a talking point over dinner. Of course, with so many Dubs out, there had to be a camera lurking, below is a taster of the full gallery:

Comber Cup XC
Saturday afternoon also saw the first race I the angry country season, thjs year the opening race moved to Comber!  The Billy Neill Playing Fields hosted the race of three loops around the playing fields – just off the greenway.  We had just the one Dub taking part:

That’s our Mike leading the way – great running posting an impressive time.  That four mile course is tricky (which XC race isn’t?!), with a talented field taking part, so really fantastic running.  Next race in the XC League is the Bobby Rea Memorial Race on 28th October in Kilbroney Park.

Cabbage Patch 10 Mile Race
Don’t worry if you’ve not heard of this one before – it is in London! The scenic 10 mile route starts in Twickenham, taking in the roads along the River Thames (passing very close to the famous Bushy Park), before crossing the river towards Teddington Lock, staying tight to the river, as runners cross back towards the finish beside Ell Pie Island. We had one Dub take to the start line:

A challenging course, in mild-for-October conditions made this a pretty unique race to take part in! Great running Anne Marie – we hope that the late entry was worth the trip 😉 !! Disappointingly, no cabbages were given out as prizes, instead a “legendary” long sleeve t-shirt and medal had to make do! Of course, we were even supplied with the obligatory photo: 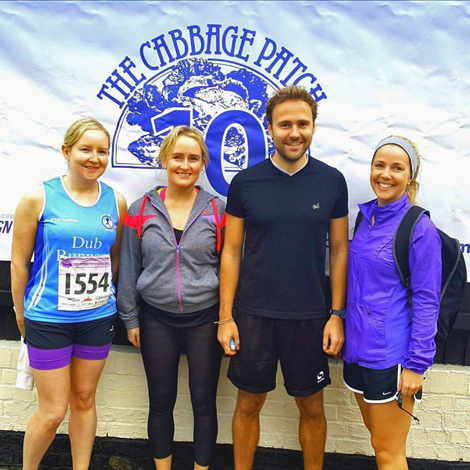 Palma Half Marathon
We all like a Winter break so why not mix our love of running with a wee holiday?! Three Dubbers did just that, tackling the Palma Half Marathon on a warm Sunday morning. Starting at the marina docks area, the first half of the race is along the coast, out past Bellver Castle and back, before climbing into the hilly city for an undulating six mile trek through the picturesque streets. Let’s see how our trio got on:

Great running ladies, impressive times considering the unexpected mid-October heat of Palma. Now that the race is over, time to rest up and make the most out of the rest of your holiday now that the hard work is done! Of course, following on the from lead of the Dundrum club runners the day before, we have some photos of the gang on their trip:

parkrun
Saturday morning in Belfast started off pretty bright – before the skies opened just ten minutes before the run was due to start! Any tree cover was quickly snapped up, and just as the briefing was due to start the rain cleared away. Luckily too, because we had quite a few people out and about:

Well done everyone, isn’t it just great getting out there and into the elements on these fresher autumnal mornings 🙂 ! Some hat tips to cover this week: second home was our pocket rocket Bernie (at Ormeau) while James D (at Derry City) was the third guy to cross the finish line. We had new PBs set by John Mc (at Queen’s), Jimbo (at Ormeau) and Bernie (at Ormeau). No photos this week, but I am partly to blame for that, as I was rushing off to get ready for Dundrum!!

Warmdown
Woah, great week for us Dubbers – every take the time pat yourselves on the back for a job well done! Lots of cool exciting races coming up over the next few months for us to get training towards. I was at the butchers yesterday evening and his wife walked in. I’d never met her before, so he introduced us. He said “Meat Patty”.

Disclaimer: Every effort was taken to ensure the results above are correct (I can still blame the wedding, right?!). If you’d like to make a complaint, then you’ll automatically volunteer yourself for writing duties next week 🙂