A mid-week half, Downpatrick and Sligo 10k’s, a 35km MTR and the parkrun all over the jump!

Warmup
Well any hope of any easy week was thwarted this week – turns out I need to pay closer attention to what races are on the calendar. We have so much to get through, I want to tell you all about an awesome meal I had out at the weekend, at a local Indian restaurant with my family. We were about to order, “Curry okay?” asked the waiter. “Ah okay,” I replied “I’ll do Summer Nights from Grease after we eat.” Right-e-o, let’s move on…

Third Birthday
As many of you know the Weekly Roundup is now three years old today. What started off as a joke to rub it in that we won a case of beer in a pub quiz the night before, has turned into this weekly compendium of all things Dub Runners. My thanks to everyone who helps me collate this every week, there’s literally too many to mention (and some of you like to remain anonymous too)!

Palma Half Marathon – UPDATE!
I’ve had a complaint that I used the gun time and not the “real” time (as it is described on the official website).  Truth be told, there was only the gun time available when I sourced the results last week, so not technically my fault.  Below, are the (official) updated results and times:

There was only three of them taking part – so I’ll let you all guess for yourselves where the “suggestion” came from (it was stressed that it wasn’t a complaint)!

East Antrim Marathon – Monkstown Half Marathon
On Wednesday, as the kids and teachers reluctantly made their way back to the school and classes, one Dub decided to race in a half marathon – as you do! The undulating route started at the top of the Monkstown Road, turning onto Doagh Road, across Monkstown Avenue before heading steadily uphill through Monkstown Wood back to the start.   Did we mention that you do this six more times?!  Let see how Louise got on:

Great running Louise – joint first place finish too! Normally courses are physically tough, but this was SEVEN loops and required some dedication to #EmptyTheTank for the finish. Great running, maybe you’ll start a new trend of morning, mid-week half marathon races…. Anyone?! As is always very important, let’s take a look at a bling: 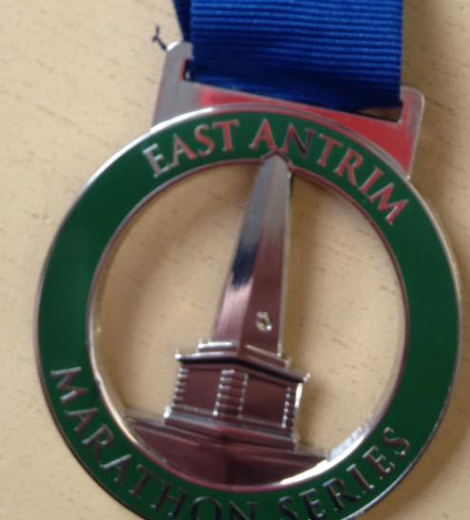 Top of the EAMS: Louise scores goal in the midweek half marathon!

Flashmob parkrun: Wallace
With Storm Brian bearing in on us (let’s spare the Darby or Grimes jokes please), it was great to see the Dubbers gather in Lisburn for the monthly tradition. A route familiar to many (and new to some) is an unexpectedly hilly course, but on wide open paths – plenty of space to make up some time. We had an Eight of Dubs on the starting line:

What an achievement from the Dubs – great running by everyone, and putting in the tourism miles too! Let tip our hats to James T and Richard who stole the top two steps of the podium – with JT bagging a new PB and Richard setting a newbie PB at the same time. Let’s not forget that we also had newbie PBs from Marie, John and Jane too. Great running everyone – next up Comber! We have a small gallery of photos up, including this one: 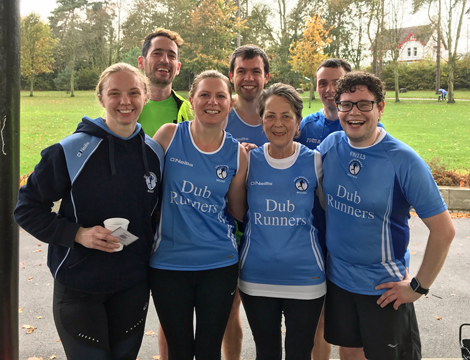 Red High 10k
Downpatrick seems to top and tail the road running year – now at the end of the season we get the Red High 10k race. Beginning in the heart of Downpatrick the course rises South East before crossing over like a triangle with a steady rise in the terrain from 4 miles onwards, before a final (short) downhill to the finish. We had just the one Dub taking part:

I’ve not seen much online about this one – but from what I have read this is one tough, hilly race. Thankfully, the race took place is near ideal running conditions, with an excellent time posted by Ronan (#2). For those unfamiliar, Ronan and his wife Marie have recently joined the club – so it’s good to see that they know about the photo rules already: 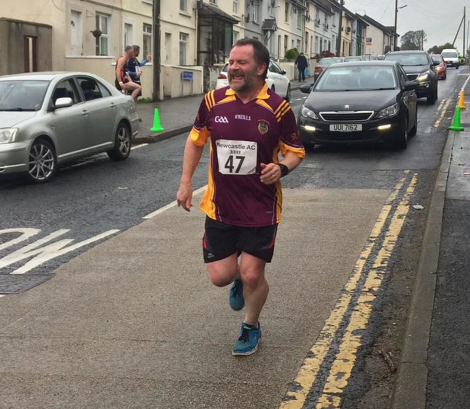 Coney Island Challenge
Stick with me here, as we move to Sligo – Stranhill to be exact, luckily, Storm Brian had passed by just in time for the start from Sligo Rugby Club! The route led down to the strand and across the tidal causeway towards Coney Island. The route involved a 2 mile run on the causeway, negotiating ankle deep pools of seawater and a strong headwind along the way. The gradual climb from the strand back to the finish line made for a challenging route, let’s see who was crazy enough to take this one on:

Not sure what possessed you to take this one on, but magic running, and a valiant effort to finish second in your age category! Worryingly, there was also a 10 mile race that took runners all the way to the island and back – which John thinks is “definitely worth a trip back to tackle next year”. Anyway, keeping with tradition, he sent us this photo of the race: 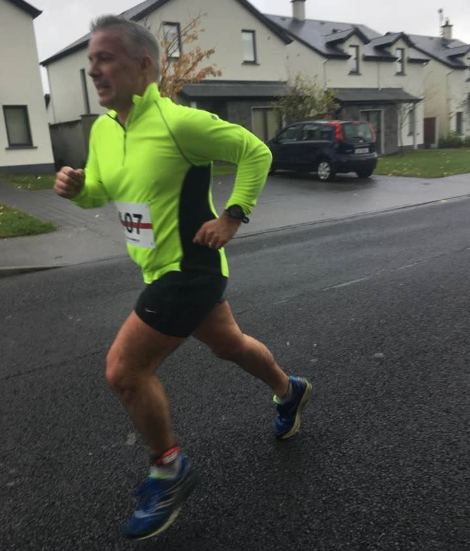 Garmin Mourne Skyline Mountain-Trail Race
This is a big one – a race over 35km which includes an 11,057ft elevation change. For those wondering, the route takes in various points including: Slieve Donard, Hares Gap, Foffany Dam, Slieve Bearnagh, Slieve Meelmore, Slieve Loughshannagh and Slieve Meelbeg. Most definitely not one for the faint of heart – nor should it be one for anyone recovering from injury either!! Anyone up for the challenge had an early 9am start :

Every so often a race comes along that you just have to admire anyone who’s willing to take on – and this is one of them. Absolutely fantastic running (and climbing) Jim – outstanding effort coming back from a recent injury too makes it all the more impressive.  The conditions were just horrible for the race too – constant wind and rain made for some unclear underwear moments!  You made it, that’s the main this, but best of all, at the half way point – you made it look so easy:

parkrun
Not all the Dubbers could make it to Wallace on Saturday morning – and that’s okay too! There’s hundreds of various parks across the world hosting events on Saturday morning for us to get our weekly 5k fix. Including the following Dubs who took on different parks:

Nice running, wasn’t it just great to be out in the elements on Saturday morning – and oh boy did we feel the elements! Let’s grab our hats once again, and tip them to Aine and Niall who were first female and third male across the line at the Dundalk event – setting new benchmark newbie PBs too! Also hats off to the Dream Dub Neil, who set a new PB running at the fifth Castlewellan event.

Warmdown
That wraps up this week, with a big weekend ahead this coming week with the Dublin Marathon – best of luck to all the Dubbers planning to race around the streets. I had a great conversation with a friend, were he said to me “Can you tell the difference between brie and markings on a tennis court?” I said “Well, it’s like chalk and cheese mate.”

Disclaimer: Every effort was taken to ensure the results above are correct (I think I actually made it this week!!). If you’d like to make a complaint, then you’ll automatically volunteer yourself for writing duties next week 🙂