One Dub is angry while loads do Dublin and parkun over the jump!

Warmup
The long and winding road reached its final destination in Dublin this weekend as we had the unlucky number of 14 Dubbers make the journey south of the border – all that and lots more to come! I was talking to my nephew at the weekend: “There’s only one thing that scares me about Halloween.” He asked, “Which is?” I replied “Exactly!” So, we have some gossip to get through:

Kilbroney XC
When one Dub heard there was a XC race on on Saturday in Kilbroney Park, he snuck out of work early – hoping for a forest trail. Disappointingly (for him), the race however was four by 2km loops of a massive field with mud sections, tight corners and sharp inclines. With the NI championships on the line it was ran at a frantic pace, as you can see:

Great effort Steven – and straight after a day’s work too! Despite the mud, and with many clubs sending strong teams, our single representative immensely enjoyed it (of course he did). After that, it was striaght into the shower – he wouldn’t even send us a photo!

Dublin Marathon
This is it – the one so many Dubbers have been training for – heading down to our namesake city for, what is now, the fifth largest marathon in Europe! It is a route many of us are familiar with, taking in the sights, sounds and history of central Dublin. The course is hillier than one would expect, heading north west through Phoenix park towards Castleknock, then into the south past Palmerstown, slicing east to near Blackrock before heading north again for a photo finish in Merrion Square. We had a literal Errigle of Dubs on the start line:

Wow – great running everybody! Fantastic achievement – ideal conditions on Sunday morning, but that is a trickier course than it looks! Topping off a great day for the club, we had a load of new marathon PBs set by: Niall, Andy, Anne and Karen!  While we don’t have enough photos (yet) for a full gallery, here is a selection of photos that have been sent to me:

parkrun
With the tumultuous weather of the past few weeks, it was unsurprising to see so many Dubs head back to the good auld reliable parkrun! One of the best ways to start your weekend, to roll out of bed and almost miss the start of weekly run. Of course, as we can see from the results, clearly many of the Dubs didn’t just ‘wake up’ and head for the line:

Magic, well done everyone – I can’t remember as many club members out in a long time, so give yourselves a pat on the back! Let’s grab a hat, place it on your head – and get ready to tip it! We had two first finishers this week Heather (at Victoria) and Suzy (at Colin Glen), added to that we also had two second finishes from Kate (at Victoria) and Bernie (at Queen’s). As if that wasn’t impressive enough: Heather, Kate and Suzy all managed to set new course PBs too – but we can’t forget Gareth (who could, I ask) who set a new PB at the Portrush event! Keeping the tradition going, some of us volunteered this week: 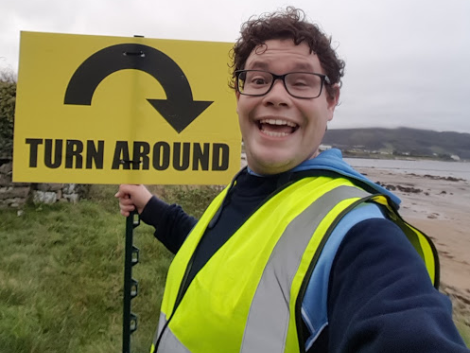 Warmdown
Well, the clocks have gone back, and for the most part, that means that the road racing season is over. Please don’t forget, if you’re doing one of the more obscure races (I’m looking at you Louise and Steven!!) drop me a line and let me know the craic! For those of you who don’t know, I am at home for the week, and I was out getting a wee winter training run in earlier when a man just drove past me on his tractor shouting “the End of The World is Nigh!!” I think it must have been Farmer Geddon.

Disclaimer: Every effort was taken to ensure the results above are correct (I really do not have an excuse this week!!). If you’d like to make a complaint, then you’ll automatically volunteer yourself for writing duties next week 🙂