Oh, you know, just seven races to cover over the jump!  Usual!

Warmup
I love this time of the year, just after the clocks change, and there are fewer races, which makes the roundup easier to write. Yeah, that’s why there’s a mammoth SEVEN events to cover today! So, took a wee week off there and I visited a top-secret bakery – I can’t tell you much about it though, it’s on a knead to dough basis. Grab a cuppa folks, this is a big one!

Taniwha Trail Half Marathon
Dare I mention it – but we all remember the Clontarf Half Marathon..?! Well this was the last half marathon these two globe-trotting Dubbers were at before they started their adventures. This New Zealand course literally built up to a mountain beginning, in earnest, from mile 9 onwards. Conditions were described as seeing some of the most mud, rain and beauty they’ve even seen on a race course. I think we all might have an idea already who did this one:

Great going folks and great to see you’re both stick at the running while you’re off on your travels! This won’t be a weekly occurrence – it’s just the first time I’ve been the both of them racing since they left, so I felt it was worth a mention this week 😉 Let’s not foregt that it is also Marcy’s birthday today (Tuesday) too!  Plus, they even sent me (okay, I nicked it) a photo from the event: 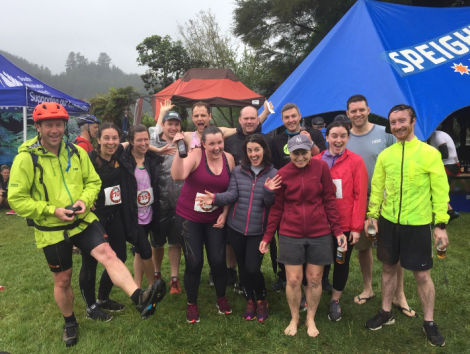 Here folks, I thought it was always supposed to be sunny out there?!

Run Forest Run: Minnowburn
Is it that time of the tear again?! The ever popular Minnowburn forest trail race took place in familiar territory – starting and ending at the Mary Peter’s Track. The hilly route for the first two miles, levels off before a gentle rise up to the finish. All set in the lovely sights and sounds of the towpath and forest. We had a brave group of Dubs who took it on:

Absolutely fantastic running everyone – with the race taking place in ideal conditions, despite the forecast! Impressive performances from everyone – including our Dub cheerleading squad of Claire and Jim (they’re available for hire). Even though this is a tricky course, the smiles say it all from our small selection of images from the race:

McConnell Shield
This week the cross country moved to Ballyclare for the 83rd running of the McConnell Shield. The course being a fairy flat grassy loop with sections of shoe sucking mud (expect that one to be used more often!!) T’was a perfect day, until 5 minutes into the ladies race when the heavens opened with a cold shower and perhaps even some hail! The ladies had the pleasure of three one mile laps, while the guys had a mere five loops!

Strong running from the dynamic duo of Nessa and Roisin, with both finishing drenched but exhilarated! The men race saw outstanding performances from Peter and Steven who left nothing on the course. Great teamwork shown by the all Dubs. With four there, it was almost enough for a team… Steven has kindly volunteered to head the team if anyone would like to speak to him!  After beating the course, all you want to do is pose for a photo:

Nice-Cannes Marathon
Moving from Dublin, but staying in Europe (for now), the Dubs headed for the Nice Marathon in France! With the sun shining, this costal route had some big hills after 18 and 23 miles – not what you want at all! Being on the coast that of course, made the race rather windy, and according to one of our two – a little boring! Let’s see how they got on:

Great running Aine, posting a stunning new PB – take a bow! After supporting Niall to his own PB last week – he repaid the effort in his supporting role on Sunday morning. Now, time to enjoy all that Nice and Cannes has to offer, but not before you sent us this photo from the finish: 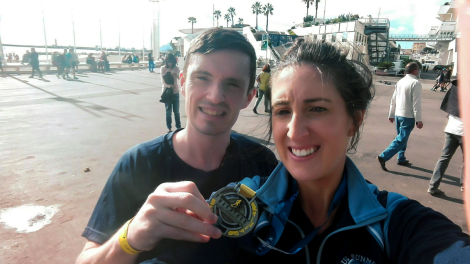 Nice to see you, you see you..: Niall and Aine celebrate her PB in France!

Decathlon 10k
An odd fixture on the calendar, no official times or results (so don’t go for a PB) and run along the exotic industrial roads of the Hollywood Exchange. Proving surprisingly popular with over 1000 taking part – all for self satisfaction and a t-shirt worthy of cleaning car windows. A damp morning, with the clouds parting before kick-off, made for ideal conditions on this (all too) familiar, flat but fast out and back route.

Into the results there, just like the race – with no countdown. Magic running by everyone, including out early pace setter James D. Not forgetting Collette who nabbed the top step of the podium (in her fastest 10k of the year) and Steven bagging himself an awesome PB (clearly not heeding my advice). A good morning for the Dubs, if a little strange, heading home with A goodie(less) bag and a banana as their reward! Naturally – there’s always time for a photo: 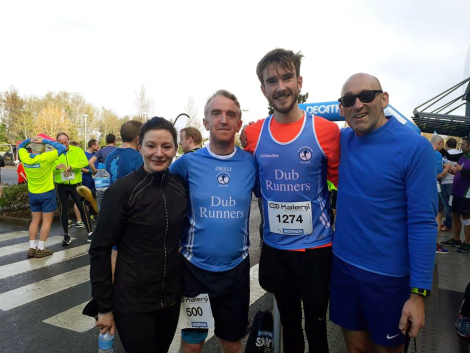 Dec’d out: Collette, Richard, James D & Steven after the 10k!

New York Marathon
Staying in Europe wasn’t enough for one Dub, she had to be more international headed to the USA for the New York Marathon. Despite being one of the big six, this is a hilly marathon with a deceptional downhill start, there are rises to hills at mile 3, 9, 16 and one for good measure at mile 22! Not put off in the slightest, we had one Dub take to the starting line:

Great running Louise – another sub-4 hour time and another major marathon ticked off the list. It wasn’t all plain sailing, and the last ten miles were a struggle, but with an impressive opening stint to the race this got Louise across the line and very happy! Now enjoy your time in the Big Apple, and even though there is a time difference, we still got a photo: 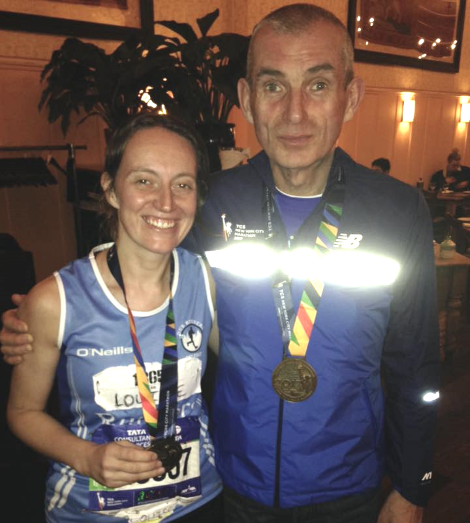 parkrun
With the clocks now back an hour, a Baltic morning was waiting in the parks. With a light overnight frost clearing from some parks (genuinely), luckily, we start that little bit later and gave the temperatures a chance to rise (a bit)! Lots of Dubs were up and at it, ready for a fresh start:

That’s the way to do it! Well done everyone, lift your arms, and give yourselves a pat on the back! Let’s get tipping our hats, second across the line and setting a new PB in the process was Claire (at Queen’s). We had a cool new course PBs set by Marie (at Ormeau). Finally, we had two newbie PBs set by John (at Waterworks) and Andrew (at Wallace). 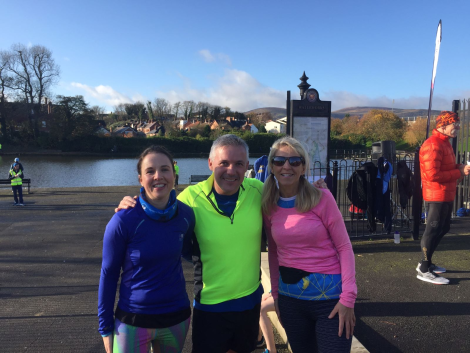 Warmdown
Massive thanks this week must go to Jimbo, Roisin and Steven who, I have to admit, made this post a heck of a lot easier for me this week! Let’s keep at the races now, but don’t forget about me afterwards either! Look, I try every week to make sure my spelling here is right, but you know it isn’t always easy – all you have to do is mix up two letters and your whole post is urined.

Disclaimer: Every effort was taken to ensure the results above are correct (Is the club covered for RSI??). If you’d like to make a complaint, then you’ll automatically volunteer yourself for writing duties next week 🙂