We have a trail half and marathon, a mountainous 10k and the parkrun over the jump!

Warmup
Welcome one and all as we recount the last seven days as if they only happened this week! We’ve a lot of new members lately, so a timely reminder that the roundup was started over three years ago as a celebration of all things Dub! We want to share in your glory of the races that you’ve taken part in, so send on all your results and photos and we’ll put your name in lights.  Random thing happened today, I was getting into my car this morning and a guy shouts over “Can I get a lift?” “Sure,” I replied “The world’s your oyster, go get ’em today!”  Shall we see what we’re been doing?

Competition Time
We’ve got an awesome cover photo (top) of Jimbo, Ronan & Bernie out and about in Belfast – can you guess outside which exotic location this has been taken? Hint: It’s a shame there wasn’t more of us, as then we could have used a collective noun 😉

Tollymore Trail Marathon
One Dubber wanted to cap 2 years of running with something special, like a couch to 42k, and to celebrate 1 year as a Dub – so to the marathon, the biggie! Tollymore, beautiful in autumn hues, mist lifting leaving a clear crisp morning. The race took in 1900 ft of climbing per lap, with 1 massive lap for the half marathon and 2 for the full marathon (84 in the full – a clue how hard this was going to be). In the half we had 3 Dubbers showing great teamwork pulling each other over the ‘Alp du Tollymore’ and finishing in great times:

Wow – excellent and amazing running by the four of you, and Steven for your first marathon distance – take a bow (several times)! Stunning finishing positions by all the Dubs out there – representing! A course full of endless climbs and twisting forest paths with breathtaking, (if you had any left) views of the Mournes – with the only flat part was a km long straight run up the main drive to the finish!

A final note, from the man of the moment to the rest of us mere mortals who do marathons: “Your all crackers, marathons are too tough.”

King (and Queen) of Gullion
Want to go for a casual Sunday stroll? How about up the side of a mountain? Well for two (and a bit Dubbers) that was exactly their how their Sunday morning went! Slieve Gullion just outside of Newry hosted the 10k-ish event (I am informed the halfway point was at 5k + 100m). The upward climb was steep but has the occasional level off before touching the stone at the top – and freewheeling your way back down some 1,400ft of elevation change. Let’s see how they did:

Magic running Bernie and Jim – side-by-side the entire way – pulling and at times, pushing each other up Gullion. It was an extremely competitive field this year, and with the recent weather – sure that just made the trip to the summit that little more difficult. Bernie bagged herself some silverware with second position – all in all, a great day for the Dubs. We had a photographer on the scene for some pictures too:

parkrun
With the coldness of the last week, it would have been easy to stay in bed this Saturday morning. Instead, we had an Errigle of Dubs think that it was a wise idea to go for a run. What awaited runners was an ideal morning for running, with the sun even breaking through the clouds by the time most of us crossed the line. Let’s have a look at who was up early on parkrun day, the best day of the week:

Great running everyone – another massive turnout this week, absolutely great to see! We have to tip our hat to a few people this week, including Anne who not only nabbed the top spot of the podium at the Colin Glen event, but also set a new course PB at the same time! Over at the Queen’s event, Bernie “Pocket Rocket” blasted her way to a new course PB! Then all the way down at the Kilkenny event, our new member Marie bagged a newbie PB at the run! 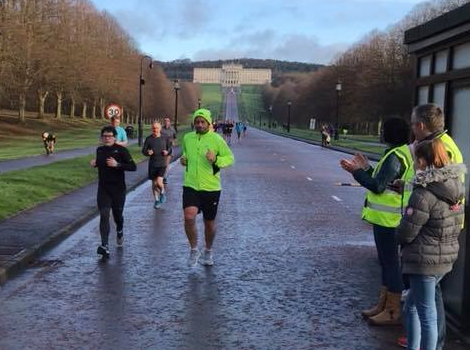 Folk om the hill at Stormont!

Warmdown
Well that just about wraps up a stellar week for the Dubs – keep up the great work, and we’ll keep covering it here! Brrr, don’t forget wrap up warm folks – it is getting colder. Of course, that is just an excuse to run faster at training so we get warmed up quicker too!!  I visited a farmer over the weekend, and noticed that his prized cow wasn’t there – so I asked where she was. He told me that she went on holidays because she had a wee calf.

Disclaimer: Every effort was taken to ensure the results above are correct (I was being a roving reporter this week!). If you’d like to make a complaint, then you’ll automatically volunteer yourself for writing duties next week 🙂