We go from 5k to 10k to a half marathon over the jump!

Warmup
Don’t tell me – Tuesday?! Are we here again already, time flies when you’re having fun. This week we cover the final big local race of the season (prove me wrong folks) – amongst other events! There’s plenty to get through, but first, like the rest of you (I’m sure), I indulged in some Black Friday shopping over the weekend. I ordered some stuff online, but I used my donor card instead of my debit card – cost me an arm and a leg.

Awwwww!
Take a look at our youngest supporter (sporting a Giant’s Trail Race buff too!!) who made an appearance on Saturday afternoon in Ormeau Park with his Dad. If the old adage “Like Father, Like Son” is true, then we’re a future Dub superstar in our midst! 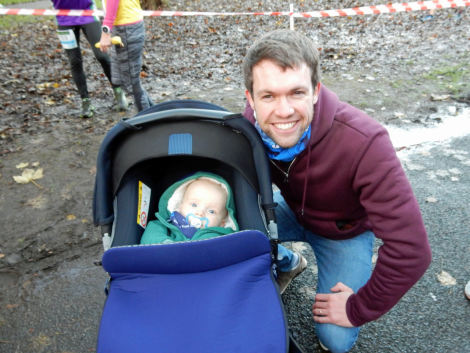 Clontarf Half Marathon
Here’s a race / course I never thought that I’d have to write about again! A return to the punishing costal route, which basically consists of 5 straights to the turn – and back again. Labelled as the “flattest” in Ireland – that doesn’t mean it isn’t tough! We had one Dub who clearly didn’t heed the warnings from earlier in the year:

Fantastic time Jim – that is impressive running on that course. I know you told me that you found it a mentally tough race because of the design of the course, add to that the freezin’ weather conditions on Saturday morning must have made that post-race shower extra nice this time around! Sadly, no photos – but we can’t blame you, hard to keep the hand steady to take one!

Seeley Cup
Here we go – one of the last big local races of the year and all eyes turn to Ormeau Park for the Seeley Cup! Three laps of the park – mostly flat, the only real rise was into the park, which is kinda negated on the downhill to the gates. As usual there was an Errigle of Dubs signed up, and they did not disappoint on a fresh Saturday afternoon:

Yee-haaaaa! I count no less than 15 Dubs out on the course – with each and every one of you posting very impressive times. This is one heck of a fast race – you just need to stand on the side-lines to see just how competitive the field is.   Spare a thought to the Dub Supporters Club – out in full force yelling and kit carrying – despite the near zero temperatures!  It might have been cold, but that was just the extra push to new 10k PBs set by Steven, James D and Claire! We have a full collection of photos available, but here’s a sample for you:

parkrun
Let’s wrap things up, as usual, with the weekly parkrun. As temperatures plummeted on Friday night, a lot of the local events were cancelled come Saturday morning. Discount the regulars who were running the Seeley Cup later in the day, meant that we had a slightly smaller than normal crowd out in the parks:

Well done everyone – we all slipped our way to (and around) the two events this week! Never easy when there’s frost and ice on the windscreens. Hat tip time – and we kick off with Heather who took silver and the second spot on the podium at the Victoria event. Staying in the East, our new Ronan Mc set a new course PB by the airport too! I think we’ve just ended our run of photos from the parkruns?!

Warmdown
Looking back, what a great day Saturday was for the club – amazing running by everyone, fantastic support and lots of jealous faces all around the park. You’re a credit to yourselves and the club! Finally, on Friday evening last, I got to meet the man who broke up one of the most violent fights Dublin has ever seen – Liam Malone.

Disclaimer: Every effort was taken to ensure the results above are correct (I’m still numb from taking those photos on Saturday!!) you all over the line on Sunday!!). If you’d like to make a complaint, then you’ll automatically volunteer yourself for writing duties next week 🙂