We have fun at parkrun, hit the mud in Ballyclare and face 10k in Loughgall – all over the jump!

Warmup
With just twenty sleeps to go (or if you’re an insomniac – just 2 more) until Christmas we’re getting into the festive spirit here at Dub Towers with our fairy lights and snowfall and Christmassy logo. We’ll get to the results in a moment, but on Saturday I’m going to arrive nice and early and spend the day at the “Biggest Corridors Of The World” museum – I’m in it for the long hall!  Here come the tables:

Run Forest Run: Loughgall
A Saturday morning trip to Armagh was on the cards for the latest race in the Run Forest Run series. A figure of eight course in Loughgall Country Park, was not only trail but also included some hills at 1.5, 4.5 and 5.5 miles (right at the end). With the weather holding for a dry, bright and even somewhat mild morning, two Dubs took to the start line:

Nice running folks – going back to your ‘roots’ on the tail course. Both of you taking on the 10k course (no takers for the 5k route this time around). Impressive going by the two of you over tricky terrain. The next race takes places in Kilbroney on December 16th. Now apparently our Dubbers got “too caught up in the moment” to take any photos – so here’s a video of the start, featuring front and centre our Pocket Rocket:

Malcolm Cup XC
If a trail race wasn’t your scene, maybe it is too clean or something, but if mud is your game, this was the race for you! Back out to Ballyclare again for the Malcolm Cup, this one was a four-lap race, each mostly flat lap was very heavy going in places. Who’d want to take on a race like this..? Not the guy you’d expect, instead two other Dubbers stepped up to the plate:

That was a bit of a hellish race – stunning running by the two of you, and impressive times (not sure I could do those times on the road myself). Want to know how hard this course was? Well our James T put his foot in it – literally – his shoe came off and he put his foot in the mud. Struggling to get it back on, he calmly and coolly set off again. Well done guys – a nice warn shower and an evening on the sofa after that is what the doctor ordered!

Son of Griddle 10k
You know the old adage “You can run, but you can’t hide” well never has that been more true week, as I surprised one Dub by telling him all about his race. Diownpatrick was the location for this latest 10k race organised by one of the local schools, with a route very different to Jimmy’s 10k – including plenty of hills! Who was this mysterious Dub, let’s see:

Great running Alastair, fourth place finish narrowly missing out on the final step of the podium! Sunday was a great day for running, ideal conditions all day, and the looped course was fun and different. Some of the younger runners proved a bit of a challenge to get around – but that didn’t stop our Alastair – but it did stop him getting a photo!!

parkrun
Oh, yeah, we had a Errigle of Dubs kick starting their weekends with a bang this week out and about in their local parks! Apparently, our recent turn for the better in the weather inspired a lot of us to get up at stupid o-clock on Saturday morning and go for a little 5k jog. Let’s see where we all went to and how we got on:

A great turnout of Dubbers, a great morning for it and some great times – well done everyone!  Grab your hat – and let’s start a tipping. We had two of our ladies and one guy first home: Natalie (at Ormeau) and Suzie (at Colin Glen), while Steven (at Falls) also took the top step. Then we had some new course PBs set by Ronan Mc (at Queen’s), Steven (at Falls), Neill (at Castlewellan) and Suzie (at Colin Glen). Finally, in a new category, our Anne put in a blinding performance to post a new PB time in Oremau – sadly for her, she arrived late AND forgot her barcode, so while we acknowledge her awesomeness here, it doesn’t count officially with parkrun 🙁  She did manage to get photographed there though: 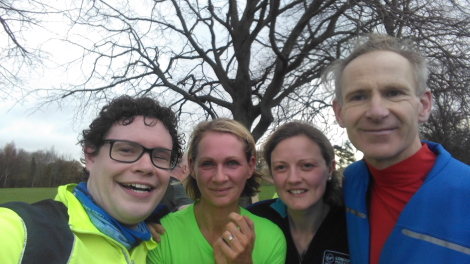 Forward Thinking: Málaga Marathon
Before I sign off this week, I feel the need to wish the best of luck to Anna, Brian D, Brian G, Gareth, Heather, Kate and Mark as they head to Málaga for their second go at the marathon.  For anyone with the memory of a goldfish, the gang all headed out last year, and heavy rain and flooding caused the event to be cancelled. So, keep those fingers crossed that the weather holds this year. In the meantime, the official soundtrack to this year’s Málaga Marathon has been revealed:

Warmdown
With that we bring to an end another edition of the Roundup. Lots of festivities still to come this month including: Stormont flashmob, Christmas Doooo and the ever popular Christmas Market Run – miss it, miss out! Monday, Tuesday, Wednesday, Thursday, Friday, Saturday, Sunday… Ahhh, those were the days!

Disclaimer: Every effort was taken to ensure the results above are correct (it is the Christmas party season!!). If you’d like to make a complaint, then you’ll automatically volunteer yourself for writing duties next week 🙂