Snow, ice and Málaga over the jump!

Warmup
Well that was a bit of a cold one, wasn’t it?! As temperatures across the country plummeted and everyone got cold – I got that nice warm feeling of an east week in Roundup Towers! Yes, sadly most of the local events were cancelled from parkrun to cross country – but that didn’t stop some of us getting out.  Bad news, the missus has left me because I am too insecure – oh no, wait, she just went to make a cup of tea.  Take your time this week, it’s a long one!

Málaga Marathon
So, while we were left freezing here in temperatures below zero, an intrepid group of Dubbers made their way to 20 degree heat and sunshine in Málaga, Spain.  The sun kissed (they told me to say that) undulating route began by the coast, a quick trip around the centre before heading out along the coast, back in and roam the Spanish city streets before heading back to the finish. Let’s see how our Magnificent Seven got on:

Stunning times everyone, definitely making up for last year’s event which was called off, and they really went for it by the looks of those times!  The icing on the cake of the celebrations are the new marathon PB times set by Heather and Kate – fantastic!  Superb cheering by the now traditional cheerleader Jim who took the opportunity to enjoy some winter rays while everyone else bust their guts on the course (despite his claim to running 12.5 miles).  He did, of course, provide some classic photography:

parkrun
Some of us still managed to squeeze a parkrun in this weekend:

Hat tips to Niall for his first place finish and then also to Aine for her newbie PB on the course!  Not even a photo for us!  Meanwhile, overwhere, it all started on Friday lunchtime, then as the day went on, one by one each parkrun began to fall. By Saturday morning all that was left raring to go were Ormeau, Portrush and Stormont, then by 8:30am just Portrush was left! Join us next weekend at Stormont for Nessa’s 200th parkrun (yes, that’s 1000k run), meanwhile take a look at the fasting moving thing on the hill this weekend: 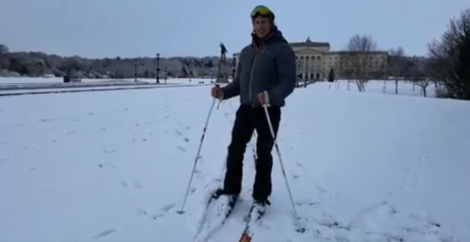 Warmdown
I finally got that relaxing week I’ve been craving since the summer – and possibly the most quiet week we’ve ever had here at Roundup Towers!  There is still plenty to keep you warm this month including: Stormont flashmob, Christmas Doooo and the ever popular Christmas Market Run – miss it, miss out!  I was talking to a scarecrow at the weekend, and I was asking him if he likes his job. He told me “Well, it’s not for everyone but – hay, it’s in my jeans”.

Disclaimer: Every effort was taken to ensure the results above are correct (ye wouldn’t be long getting frostbit!!). If you’d like to make a complaint, then you’ll automatically volunteer yourself for writing duties next week 🙂