A 5 mile race, a normal parkun and a festive parkrun over the jump!

Warmup
Happy Christmas everyone! The festivities and food may well still be underway – but that doesn’t mean we stop at Roundup Towers – because if there’s Dubbers running, we’re working too! I got the best present ever this Christmas: a broken drum – you can’t beat it! Sit back, relax with a glass of eggnog and find out what we’ve been up to!

Christmas Eve Sunday Run
Now, I know that we’re not known for our partying or celebrations (cough), so how could anyone resist Andy’s e-mail of free mince pies after the Sunday run on Christmas Eve?! You didn’t even have to do the run to be treated (I think that is a bit of cheating myself though) – so let’s take a look at an Errigle of Festive Dubs. 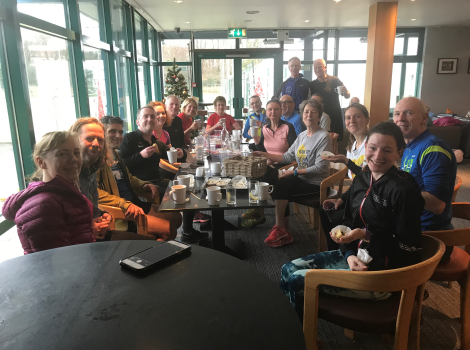 Thanks to Andy Wells for this organisation and to the Belfast Boat Club (shortened to BBC, who knew!?) for putting us up after the run!

Hazelbank 5 Mile Road Race
I don’t know about the rest of you, but I had a nice and relaxing Sunday (or Christmas Eve as it is better known). Others though, decided that tackling a five mile road race would be a better idea! Kicking off in Hazelbank Park near Newtownabbey, the coast route started off with a bit of a hill before levelling out on the out and back in course. So, who’d do a run on Christmas Eve I hear you hell?!

Magic running Jane and Roisin – more than ably representing the girls of the club. Great times and even better you got to enjoy your Christmas dinner and all the trimmings without feeling any guilt at all! As Noddy once famously said “It’s Christmassss”, and that’s family time so a special mention to Jane’s sister Claire (who we all know from our Summer Social evening) and Roisin’s niece Orla and her husband Paul who all ran the race too. Look at the smiles on those faces:

parkrun (#parkrunday)
With so many events cancelled in recent weeks, you’d be forgiven for forgetting how to get up early on a Saturday morning for parkrun day! This time round a very mild Christmas Eve Eve morning awaited anyone crazy enough to venture through the traffic to make it to their local park. With plenty of festive treats (and cheer) available, we had quite a few Dubs take to the paths:

I am going to guess that we had so many awesome runners out on Saturday morning as the alternative was to go shopping, so we all chose the lesser of two evils – great work everyone!  Grab your Santa hat and get ready to tip it, as this week Steven crossed the line first at Colin Glen – setting a new course PB at the same time! We also had a new PB set by Mark (at Victoria). As it’s Christmas, let’s give a special mention to our Honorary Dubs: to James S’ better half Kathryn (at Protrush with James) and to Max and Elaine (at Colin Glen with Steven) who, of course, are Steven’s awesome son and lovely wife! 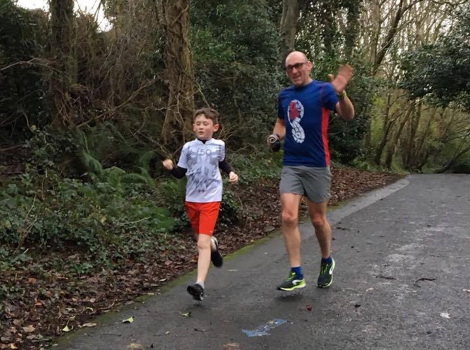 Keeping it in the Family: Steven and son Max at Colin Glen!

Christmas Day parkrun (#200NotOut)
Christmas morning is all about excitement, anticipation and exhaustion – but if only you’re one of the lucky few who has a local Christmas Day parkrun that you can attend! Non-Saturday parkrun events are always a special occasion (more so for one Dub in particular), so let’s see who put down the presents (and chocolate) and made it to the start line:

Well done everyone – getting up once a week for parkrun is tough enough – being dedicated enough to get up for a SECOND is worthy of a round of applause! Tips of the hat go to Steven who set (another) course PB at Waterworks and to Eimear who was a newbie at Craigavon!  A special Santa hat tip to Ronan O who completed his 200th parkrun – hot on the heels of Nessa last week. He ran his first event at the inaugural Derry City parkrun in June 2013, so it was only fitting that he passed the 1,000k mark at the very same event. On the road to 200 Ronan has completed all 25 events in Northern Ireland, the 4 in Donegal and one in Castleblayney!

Warmdown
That’s it for now and for 2017. Plenty more races to come over the next week of the holidays – so our next edition on January 2nd will be jammed packed! All that is left for me to say is thanks for everything throughout the entire year – I have no idea why you all let me continue this week in, week out – to all my little spies providing me with information and to everyone who sent me through photos and results – I couldn’t have done it without you. Cool story about my Christmas dinner, apparently the turkey I had this year was a bit of a rocker – well, he had drumsticks anyway!

Disclaimer: Every effort was taken to ensure the results above are correct (just remember I don’t get paid for this!!). If you’d like to make a complaint, then you’ll automatically volunteer yourself for writing duties next week 🙂