Warmup
The time between Christmas and New Year’s is supposed to be a time of relaxation and to unwind after another tough year. Naturally, we’re runners so that means sweet FA to us, and we were out in force and style the last seven days. This is the time of the year when we all make resolutions, and I want mine written down so that it is official – my New Year’s Resolution is 1080p. Right, let’s get started on this one:

Headtorch Run
During December, as a club, we try to do things a little bit differently. Our Thursday run last week was on a course familiar to many, the Giant’s Trail Race route, but this time it was run with headtorches! Some very brave Dubbers took on the ice and cold, so they deserve a pat on the back: 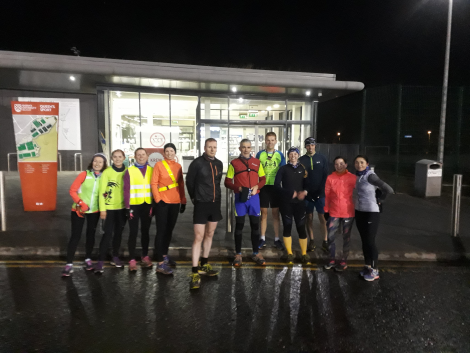 BARF Turkey Trot
Boxing Day: ✓ | 12km course: ✓ | 521m of elevation gain: ✓ | Max elevation of 580m: ✓ – it must be time for the Turkey Trot!  Set in the beautiful surrounds of Tollymore Park, this annual race attracts only the very brave. Basically, this is a trail race, up a mountain to the half way point and back down again – all after a full turkey and ham dinner with all the trimmings the day before! This sounds like a race for only one man:

Fantastic running Jim – what a time, and, I am told a very aptly named race too! It is always nice to finish a race alongside family members, this time your nephew (although we couldn’t help but notice you snuck over the line a second before him!) In preparations for this one you had to go easy on the beers on Christmas Day -so we know that you made a be-line for the pub after this one. Adding to the festive cheer, they even sent through some photos:

Greencastle 5 Mile Road Race
Boxing Day: ✓ | 5 mile course: ✓ | 400+ ft of elevation change: ✓ – it must be time for the Greencastle 5 Mile Road Race!  A firm favourite in the North West every year straight after Christmas, the Country Tyrone hamlet (yes, I Google’d it) hosts the challenging race. This race is always run despite the weather (and they’ve had snow and ice in more recent years), so a warm (enough) morning provided favourable conditions. The undulating looped circuit, has a lovely Christmas surprise in the form of a sharp rise from about a mile and a half from the finish! We had a few Dubbers travelling home for the holidays, who decided they wanted to squeeze in another race:

Fantastic running everyone – that is a tough course to take on, and everyone posted amazing times too. I am not quite sure how you coaxed yourselves out of bed to take it on – but at least you can wear a smug smile on your face for the rest of the day. A special nod to our Lynn wasn’t just out to beat her own time, but personal pride was at stake, as she was racing her husband on Tuesday morning – and we’re happy to report that her husband was gracious in defeat!  I gave the spies double pay this week to work over Christmas, and they caught some shots:

Muff Glen Trail Run
Okay – don’t laugh. Muff Glen (yes, it is a real place) has hosted a tricky trail race for the last two years. The two lap, two mile route is a mixture of forest paths (with leaves), steps, two brutal hills and a short blast on a road (for good measure). It is always timed outside of the heavy eating days (thankfully), so on a cold and frosty Wednesday morning, we made it to the Muff start line:

A cold start – but totally worth it for that extra dig into the selection box on Wednesday evening. Despite the small field taking part that was good running all round. Definitely a race for settling into a pace and picking off the runners in front as you go along. This race comes highly recommended if you’re about the North West next Christmas – if only for the jokes on Strava 🙂 It’d be rude of Ronan to not take a few photos when he was there:

EAMS New Year’s Eve, Eve Marathon
This Carrickfergus route along the coast past Greenisland down as far as Jordanstown formed part of a back-to-back marathon event. The course was “flat and windy” (a bit like my … [wee joke for the Castlewellan crew there]) and definitely a course for pushing on and targeting, maybe, dare I say it – a personal best? We had one Dub taking up the challenge:

Boom! Mic drop! That is how you do it! Massive congratulations Anne – a SIX MINUTE personal best time over the 26.2 mile course! Amazing work, what a way to round off the year (eve if you needed a Lepsim post-race). We even have a selection of photos from the race, you made it look easy:

Outstanding running and achievements all round by everyone! A great club day was had by all – despite some of the sneaky tactics deployed by the lead Dubbers – while others enjoyed it as a day out to enjoy the race and the scenery. A message from Jimbo that it is now 1-all in his Cracker series against Brian D – and that next year’s race is the ultimate decider! We even had a faithful, dutiful photographer on the scene who took 50 photos from the event, including this small snapshot:

Race Over the Glens
Most people want to go for a gentle walk on New Year’s Day. Some might even head to Glenariffe Park for a casual stroll. You can imagine how dazed they’d be to see a bunch of runners there! A mere 800ft of elevation change in mountainous terrain that would make Jim proud! He wasn’t there himself, but five other Dubs stepped up:

After the indulgences of Christmas and New Year’s this is not a race to be scoffed at (unlike the turkey and ham)! Not an easy challenge, but us runners like to push ourselves and start the new year as we mean continue. Absolutely fantastic running by all five of you – you might have given me more work to do this week, but that is one impressive race to take part in! I’ve scoured Facebook and courtesy of Mark Kelly, managed to find some images from the race too:

parkrun (#200NotOut)
If you could bring yourself to drag yourself out of bed on Saturday morning – then a dump but drying park waited your keen legs. With a lot of UK-based events being cancelled, it was a nice change to have (most) events running here. With that, a lot of the club took the opportunity to visit Victoria Park for a very special person, doing something only a few have done before her:

Fantastic everyone – a post-Christmas, pre-New Year’s Day parkrun for so many Dubbers. For the last time, let’s grab our Santa hats and get them tipped to our Natalie, who only went and finished third in Ormeau on Saturday morning! Also to Marie (at Victoria) who set a newbie PB. Our Kathy completed her 200th parkrun at Victoria on a lovely Saturday morning. Little did she know on 5th November 2011 when she completed her first parkrun in 27:04, that after a further 151 parkruns in that park and another 48 parkruns at nine other events across the UK and Ireland – she’d hit that awesome achievement of 1000k. Let’s take a look at a selection of photos from the celebrations:

parkrun (#NYDouble)
Stormont – 09:30
First up, you needed to be bright eyed and bushy tailed for Stormont! Once again hosting the early offering the estate hosted what is now NI’s biggest parkrun event with 654 finishers, including an intrepid group of Dubbers:

Inspired running folks, fantastic to be part of the biggest parkrun event in NI once again! Let’s get tipping our hats to Steven and Heather who clearly stayed off the drink and managed to run new course PBs. We also had Mark Mc and Joanna set their newbie PBs – new goals for the future!  That’s wasn’t the end of the parkrun events January 1st…

Ormeau – 11:00
For those who made had a bit of a sore head, there was a second event at 11am on New Year’s Day! A mere 618 runners decided this was the event for them – although this number was split with a second helping at Waterworks at the same time! Despite the torrential downpours (plural) we had an Errigle of Dubs take part:

Between crowding and rain this made the run trickier than it needed to be – so a big hand to everyone who took part! Sorry to Kathy – we all missed your cake, again! One hat to tip, to long standing member Maureen who was a newbie to Ormeau – so that’s the target set now! Big up to the nine Dubs who did the double: Heather, James, Jane, Joanna, Kathy, Mark, Nessa, Ronan and Steven.  Massive shout out to James and Kathryn Sheridan who were crazy enough to run between the two events too! Keeping up a good run of images, we have a small selection of phots at Stormont from our friend Mel Boyle:

Warmdown
Phew – that was a big one! We can safely say that the Dub Runners have kicked off 2018 is an almighty bang – and it is only going to continue from here! Before I sign off, just a friendly note to wish that all your troubles last only as long as your new years resolutions!

Disclaimer: Every effort was taken to ensure the results above are correct (did ye see the length of it this week?!). If you’d like to make a complaint, then you’ll automatically volunteer yourself for writing duties next week 🙂