A return, Castlewellan by night, half marathon day + parkrun all over the jump!

Warmup
You’d all thought it was gone – but oh no – the snow is back! Be careful out and about out there, its not the nicest running conditions ever. Always remember to be safe and be seen when out running especially on the paths during these dark evenings. Did I ever tell you how the missus and myself first met? Well, she agreed to go out with me after I gave her a bottle of tonic water – I schwepped her off her feet. First up, let’s see if you spotted the deliberate omission from last week’s edition…

Run Forest Run: Tollymore
It happens, I’ll admit, every once in a while, someone slips into a race without me noticing – or so I want them to think anyway – muhahahahaha!!

Great to see Andy B back in action, he may have been out in a supporting role, but he was still representing us proudly! Great running folks!

Castlewellan 10k Night Race
For anyone disappointed by the postponement of this race before Christmas, they only had around a month wait to take it on! With mere 800ft of elevation change, a hilly two lap course around the lake. Now, for those unfamiliar, this is in a forest park, so if, like me, you struggle in the best of conditions, image what this torture was like. Naturally, we had seven Dubs up for it:

Woah, great running and some stunning times in those tricky and challenging conditions. Everyone who did that race deserves a big hand, but if I may single out one person – Eammon. He took a big tumble in the first mile, but recovered and didn’t want a DNF by his name to lead the Dubs home. I would show the picture of his injury, but some of you may be eating, instead here’s some photos of Dubs smiling:

EAMS Half Marathon Day
Wa? Yeah, I had to do a double take as well, 13.1, or 13th January on Saturday was also known as World Half Marathon Day! So, the obvious choice there is to run a half marathon! From Carrickfergus Castle to Gideons Green – the out and back in coastal route, sounds easy, but with an added costal wind just adds to the atmosphere! There’s only one person for the job:

Ah Louise living up to your title of ’Runniest Dub’ (Steven’s chasing you for that one, btw), a great run – and what a medal too! Add to the cool time, Louise nipped in and snagged the final step on the podium as well. Sure what else would you be doing on a Saturday morning anyway?! 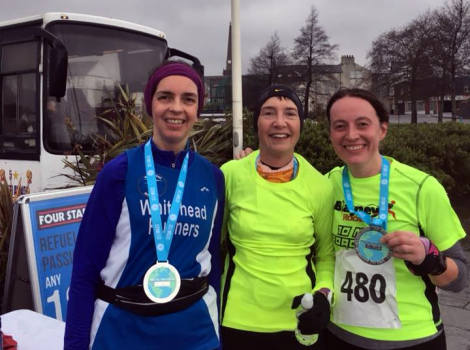 Half Marathon Day: Louise celebrates on the podium!

parkrun
It might be getting that little bit warmer (ha, look at the forecast for this week), but sadly that means more cloud cover. Of course, that also meant rain on Saturday morning. Instead of running for cover, we decided that we’d go for a run in the park:

Nice running everyone, that was a morning for getting home and getting a nice warm shower and taking the chill away. Let’s get tipping our hats, first up and first home was our Claire at the Ormeau event, while over at the Queen’s event Steven took home the spoils on the top step! Our two podium sitters also bagged themselves course PBs too! Finally, the one newbie PB this week, set by Mike at the Rostrevor event – no bother to him!

Warmdown
That is a wrap and don’t worry folks – you made it half way through January, we’re nearly there now. As we begin are various preparations for the upcoming races, don’t forget the camera to take a few pictures so we can really put your name in lights! My friend was telling me about a awful gig he went to in Southeast Asia. “Singapore?” I asked. He replied “Yeah, and the band were terrible too!”

Disclaimer: Every effort was taken to ensure the results above are correct (busy, busy weekend – so I’m playing catchup!) If you’d like to make a complaint, then you’ll automatically volunteer yourself for writing duties next week 🙂