Mad March has begun – read all about it over the jump!

Warmup
Roll up, roll up! Welcome ladies and gentlemen to what we’ve had to ‘dub’ Mad March – why I hear literally no one ask? Well, stick with us over the next few weeks and you’ll soon work out why the editors here at Roundup Towers will be off work with RSI!  With the rush to get stuff I went to the pharmacy yesterday and asked the assistant “What gets rid of the Coronavirus?” She said, “ammonia cleaner” – I said, “Oh, sorry, I thought you worked here.”  Are you ready?

Galeforce Sky Run
The 22km race is called the “Expert Mountain Run” for a good reason, with a max elevation of 605m, a jaw dropping elevation gain of 1295m which includes a one CAT 1 and CAT 2 climb! Not for the feint of heart. Set just within County Galway and overlooking Killary Fjord, which was just about visible in the brutal weather conditions, this is one tough race – so just which Dub Dynamic Duo were in action early on Saturday?

We often talk of tough runs, but this one takes the biscuit. Cracking running from Claire and Bernie, with eye watering climbs, just looking at the profile of this race alone is enough to put anyone off. Putting the right foot forward both of you took it in your stride (but being able to do a recovery run was just taking the mick!!), including top ten finishes for both.  Let’s not forget the 60 runners didn’t even make it to the finish line of the 22km race!  Brilliant ladies, absolutely brilliant, well done. 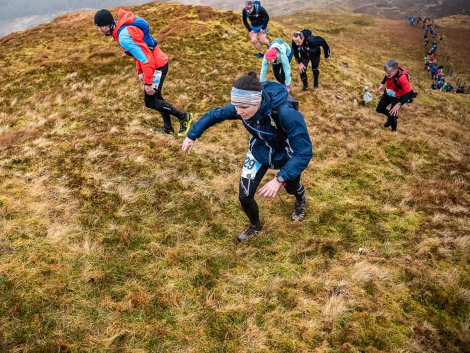 Sky is the Limit: Claire mid race and determined!

Carlingford Half Marathon
Here it goes, the road racing season kicks off for 2020 in style with the ever popular Carlingford Half Marathon.  The traditional route of two halves with an undulatingly hilly opening 10k followed by a hard fought, but reasonably flat closing 10k along the coast with the wind and the elements battling against you.  We had a small Errigle of Dubs on the start line:

Ideal conditions made for a cracking morning’s racing for our team of blue tops – who all posted some cracking times. Of note though, we had new half marathon personal best times set by Marie, Edward, Dermot, Márie Mc, Monica and Julia! Outstanding running folks, you have set the bar very high for the rest of Mad March (and for the rest of the club!!)  We have a gallery full of photos thanks to Ronan Mc who was side-lined, but offered his photography services like a champ! 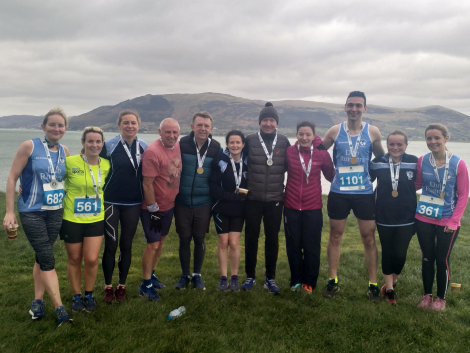 Carlingfast: Mad March got underway with a host of Dub PBs!

Derry 10 Miler
Ten-mile races always sound easier than half marathons don’t they?! That might not be the case for this one, which starts the reclaimed Ebrington Square, through the park and along the railway line, around the hospital, before a brutal climb over the picturesque Foyle Bridge. Along the quay and the River Foyle, before a quick turn over the Peace Bridge and a hop to the finish. A cool course for a cool Dub:

Well, they might not be hosting a marathon this year, but they know how to put on a ten-mile race. Brilliant running Andrew through a tough and challenging local field. Some real consistent running too – and not a bad morning for it at all.  A special nod to our Friends of the Dubs James D who ran a 01:05:38, and to Ivor R who clocked in at a cool 01:18:56. 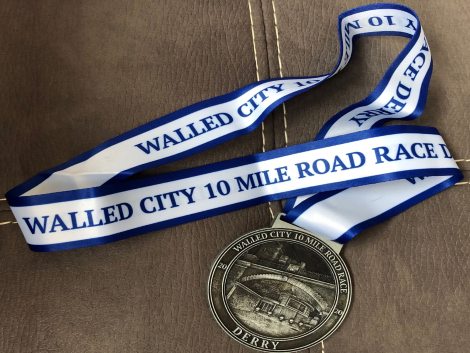 Shane’s Castle Half Marathon
The Shane’s Castle race, which is just at Antrim in case you didn’t know, is contains a mix of terrain, trails, tarmac and some footpaths. Starting at 70ft elevation and maxing out at 140ft (that’s double, btw) the undulating course doesn’t let up for nine miles, before a more relaxing final 5k which trends (mostly) downhill – phew! Tired, our solo blue top was:

Boom! That is how you do it Judith – sneak off while a bigger, more popular half marathon race is on, and then outperform the field and your own expectations! First home and a brand spanking new 13.1 miles personal best – that is excellent, and you should be well proud of both of those achievements. Add to all that, Judith knows how to keep us happy here in Roundup Towers too providing us with a few pictures: 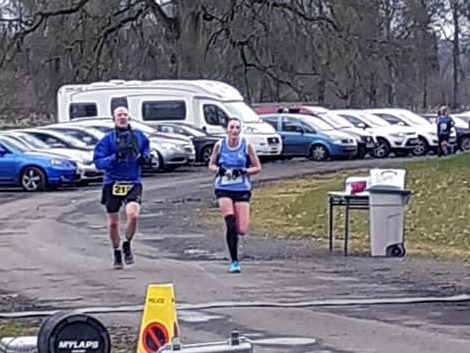 Judith's Castle: PB and first placed female in the half marathon! 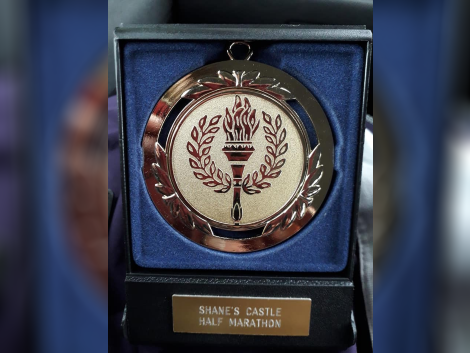 Judith's Castle: Check out the bling!

Race to Recovery
Now in its eighth year, Addiction NI’s annual race has been a focus on the positive outcomes for the thousands of people embarking on the road to recovery. Set in Oremau Park, a smaller inside loop of the park, before running the park perimeter from Ormeau Bridge to Ravenhill – complete that three times and on your last time back into the park it is a short, sharp burst to the finish. On International Woman’s Day we had one female member racing:

Some fantastic running Karen – and a few, vital seconds shaved off the auld personal best over 10k too! With ideal running conditions on Sunday morning, and a park that we’re all very familiar with helped push you towards that awesome goal – you made it look easy. Some bragging rights obtained and the right to put the feet up for the rest of the day too!

Castle to Castle 50km Trail Marathon
(A.K.A. Trilogy Part 1 due to follow up races in August and November). From Glenarm Castle to Carrickfergus Castle this 50km trail race is, in a word, an epic.  And so, our Dubs set forth from Glenarm Castle to Carrickfergus castle – a smorgasbord of Game of thrones sets. A challenge of 21km over three unmarked mountains, then a 4km forest trail with a 25km road run to finish (cause why not?!). Our brave Ser knights were

What a doozy of a race – but one that produces absolute legends within the running club, Katherine and Steven you deserve standing ovations for that one. Everything left out on the course, with wind and hail at every turn, not forgetting doing it all whilst carrying food, water, equipment and reading a map, epic really is the word. I think you earned bragging rights on this one for some time to come! 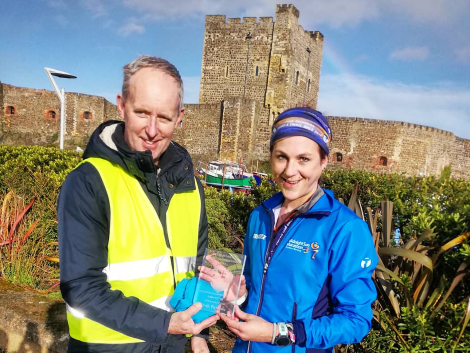 Queen of the Castles: Kathine, all smiles, after the gruelling 50km & second place!

parkrun
13 different events and 22 runners from the club took part in the first parkrun of March this year. As mentioned last week we had two new events join the family last weekend, and next weekend our club Flashmob events return as we will be heading to try out the new Knockbracken Reservoir event in Carryduff. We’ll send out details during the week on that one, in the meantime, let’s relive what everyone did this weekend:

Get that special hat back out, as we have to tip it to a few new course PBer’s including Peter M (at Queen’s), Brona (at Queen’s), Laura (at Queen’s) and Anna (at Wallace). It did seem to be a week for newbie course PBs with benchmarks sets by Brendan (at Derry City), Mike S (at Limavday), Ronan O (at Crawfordsburn Country), John C (at Knockbracken Reservoir), Liam (at Knockbracken Reservoir) and Nuala (at Father Collins).  A few photos are in order… 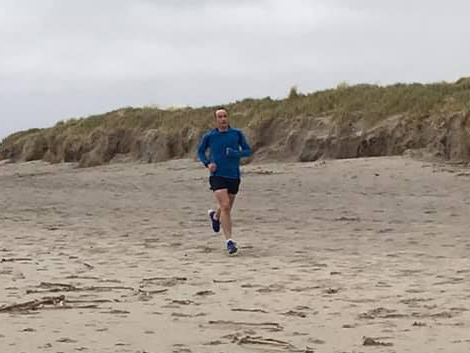 parklife: Life's a beach for Alastair! 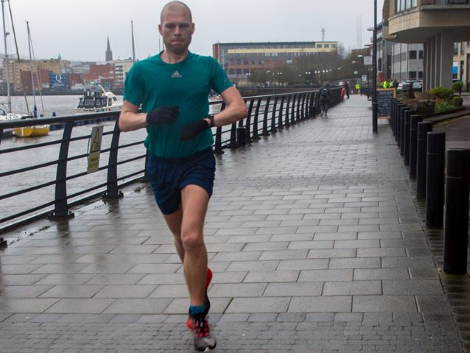 parklife: Brendan checks his watch at the finish of the Derry City event!

Warmdown
It begins. What a roundup and well done to everyone – we hope that we got your name in lights. We’re calling it Mad March for a reason, so if you’re doing a race, it doesn’t even have to be off the beaten trail – but try and let us know here at the Towers. It will make compiling this a lot easier over the coming weeks if we get a wee nod in the right direction, please.  For the next 40 days I am giving up Word and I am only going to use spreadsheets – Excelent.

Disclaimer: Every effort was taken to ensure the results above are correct (We hope we have more takers at the AGM?) If you’d also like to make a complaint, then you’ll automatically volunteer yourself for writing duties