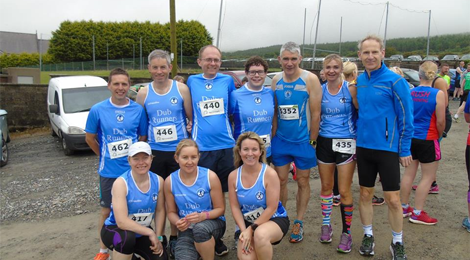 So many races, so little – all over the jump!

Warmup
Well come on folks, once again – I said “warmup!”: 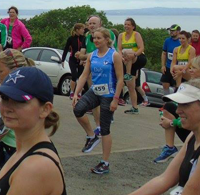 Sorry Anne Marie – I couldn’t resist it! Right, well that was a busy one wasn’t it?! I propose that no one is allowed to do any races in the next week just to give me a break for a week – like anyone ever listens to me! I bought myself a new plug in air fresherner for my car, but it won’t work. I plug it in and switch it on – nothing… It just doesn’t make scents! Okay, deep breath – let’s begin!

Gran Fondue Giro d’Italia Northern Ireland
In my bid to try and be nice last week, I only partially covered some of the Giro results.  So, not content with just two marathons to take part in last Sunday – a lot of the club took part in the third Gran Fondo event:

Fantastic cycling everyone – even the thought of doing so much cycling is tiring, so fair play.  I know there was no running involved (that I’ve not been told about ayway), but it is still some achievement.  Plus I was sent a few photos, so it would have been rude to not correct this one! 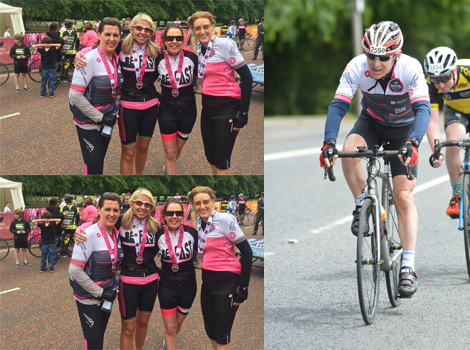 Habitat for Humanity 10k
While everyone else was resting up before their respective marathons last Saturday – we had one Dub taking part in a charity fundraising race.  The course is very familiar to all the Dubbers – out the Lagan Towpath and back in again (who’s having fartlek flashbacks?!).  Let’s see how Ryan got on:

Nice – top step of the podium for Ryan, and representing the Dubs!  Great running, and a great cause to support (Habitat for Humanity) – so that was the good deed done for the day!  We had some spies around (as always) who were able get a picture of Ryan post-race – you’d think he could smile after winning… 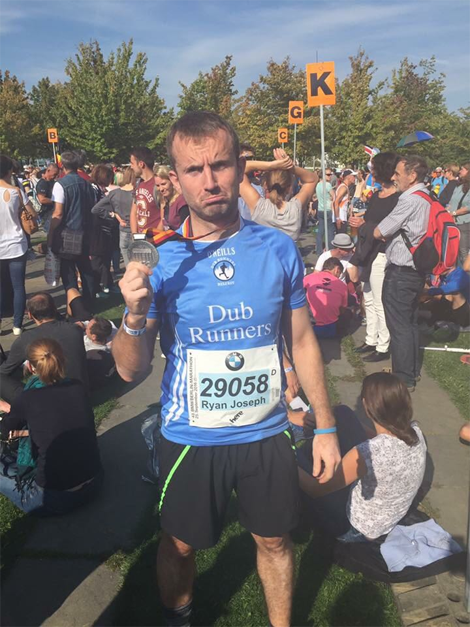 Couch to 10K: Ryan all Smiles after Winning!

Fairhill 5 Mile(r, Hi) Road Race
A nice mild Wednesday evening in Ballymena provided the perfect setting for a little five mile road race.  The route, kicking off by the Seven Towers Shopping Centre, swinging out by the (parkrun favourite) Ecos Centre, before heading back in along the A42 towards the finish.  The undulating course spurred on three Dubs to take part:

Nice running folks– an impressive array of times posted by all of you.  It is always nice to fit in a wee mid-week race during the summer months when you can get it completed in daylight!  Not bad going at all – considering it was straight after a full working day!!  Breaking his tradition, James even sent though this photo: 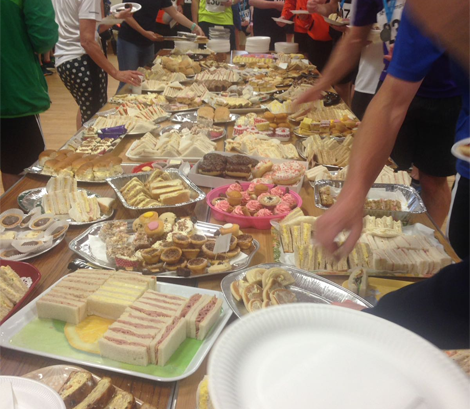 You Are What You Eat: James at the Fairhill 5 Mile Road Race!

Craigavon Lakes 10k
You had your pick of the races on Wednesday evening – all requiring a little travel outside of Belfast to take in too!  Anyone familiar with the Craigavon parkrun route will know about this race.  With its subtle and deceiving hills, taking participants on two loops of the two lakes before heading to the Boat House for the finish.  Just the one Dub taking part:

Nice running Louise around a challenging course.  A great night for a run too – near ideal conditions and it shows in the time posted.  She might be new to the club, but Louise provided (via Facebook, obviously!!) a photo from the race: 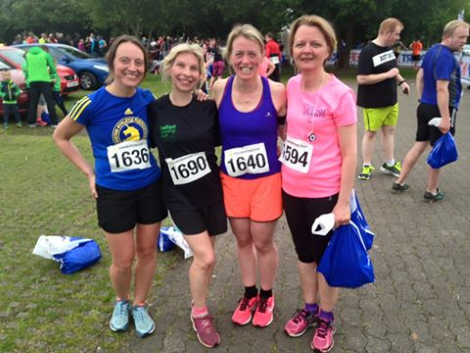 Craigavon Ladies: Louise (far left) after an “enjoyable” 10k – her words, not mine!

Hill and Dales, Race 9: Loughshannagh
It’s not like the forecast for Thursday was thundery showery and hailstones – so naturally the instinct is “let’s go for a run up the top of a mountain”! The just over 4 mile route starts between Newcastle and Warrenpoint at Carn Mountain, heading towards the top around Lough Shanna (hence the name) before downhill to the start. One Dub took on the ninth race:

Nice running Bernie, that is a fantastic time. I’ve had a look at the map and the profile of this race does not look like fun at all. No one would know that you’d just ran a marathon five days before hand!! No photo though from the event 🙁 we have to ask – did the race even happen?!  🙂

Run Dublin Run: St. Anne’s Park
Just North of Dublin, just beside Clontarf if anyone cares, is St. Anne’s Park. Part of this new ‘Run Dublin Run’ series, the 10k route was two laps of the massive park. The mostly flat course is away from any road traffic and ideal for having a shot at setting a new personal best over the distance. So who made the trip to Dublin on Thursday..?

Absolutely magic running Jim – a nice route (from the pictures) and on a flat but challenging course. Definitely a tough one in the conditions, images on a certain social media site suggest a relaxing, deserved beverage was consumed after the race!  It was so wet, the only photo taken was of the cool medal: 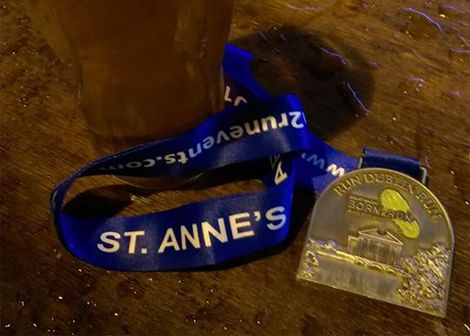 Mourne Way Marathon
Heat – ✓. Midges – ✓. Mud – ✓. Wind – ✓. Rain – ✓. Flash floods – ✓! This year’s Mourne Way Marathon was not for the faint hearted, battling not only tricky terrain (the clue is in the name), but also in the conditions experienced this year. Step forward the only Dub brave enough to take it on:

Marvellous Jim, magnificent running – and what a superb time to finish in. That was a challenge and a half on Saturday. Jim would like us to know that this year’s course was “described as the most brutal Mourne Way Event in the last nine years” – not that he’s looking any sympathy from us! He didn’t look like he enjoyed that one did he?! 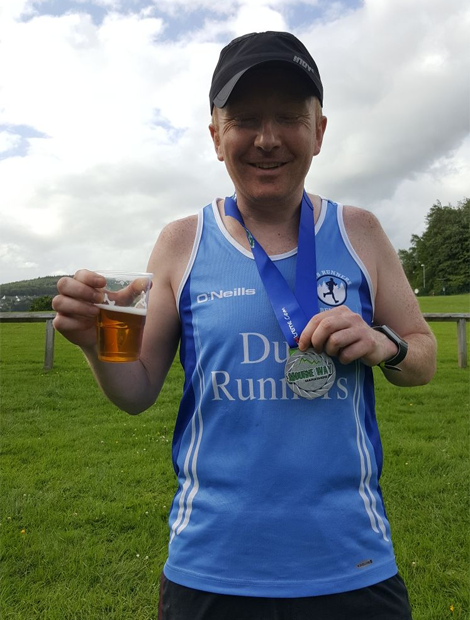 Mon-my Way: One gives you a buzz, the other is Jim!

Glenmore Challenge
A frim club favourite, Glenmore AC hosted their annual 10 mile challenge race. With a deceiving downhill to start, a steady rise to around 7 miles, before a gentle downhill to the finish line. Add to all that joyous fun of the route some quite intense heat being kept in by the slightly overcast day. With no let up during the ten miles we had an Errigle of Dubs taking part:

That is some magic running on a tricky course for the conditions. Great times posted by everyone, everyone with big smiles as they crossed the line! There were some excellent post-race food along with a live band – and some awesome medals! Let’s not forget the Friend of the Dubs (and sister) Cathy Ryan who completed the 10 miles in 01:40:44. Oh, yes, we also have a gallery of images from the race – including this one:

City of Derry Triathlon
Having just hosted the marathon of the year (an unofficial title I will admit), there was a second big sporting event in two weeks on in the North West. Comprised of a 750-meter dip in the Foyle, a 20km cycle around the two bridges (twice) finished off with a nice and relaxing 5k (I was told to say that). Just the one tri-er from the Dubs:

Nice John, very well done! It might have been a rotten morning up there, but that didn’t stop you putting in an impressive performance! I do have one question for you, I found a photo online and was wondering- what part of the triathlon where you doing at this stage?! 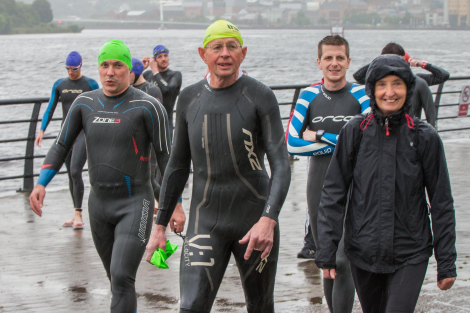 parkrun
What summer?! Yeah, we were all thinking that when we heard the overnight rain showers – but that didn’t stop some of the club getting out for their weekly 5k in the local park! It may have dull, damp and grey but the parks were calling:

Sweet! Great running everyone, nice and impressive times posted by everyone. We have no individual hats to tip (this doesn’t happen too often) – so everyone give yourselves a pat on the back for taking part in something so special across the world!

Warmdown
You made it! Or you scrolled down – make sure you didn’t miss anything – cause I’ll put good money on me having missed something! I tried my best, but remember – I need you to tell me all about your races too – don’t be shy, you all have my e-mail address. I have ripped a pair of my work trousers, and I think my local dry cleaners can repair them – or at least sew it’s seams.

Disclaimer: Every effort was taken to ensure the results above are correct (I’m sore from Glenmore!!). If you’d like to make a complaint, then you’ll automatically volunteer yourself for writing duties next week 🙂